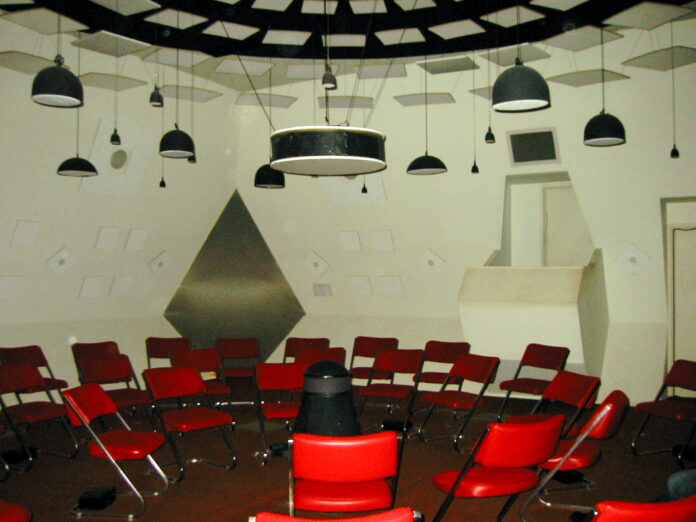 In the years when I lived in San Francisco, one of my favorite destinations for a night out was a little-known local institution called Audium. It is the world’s only venue devoted exclusively to the performance of pure sound. Although I haven’t been there in years, Audium is still very much in business and, as far as I can tell, little changed since my last visit, delivering the same sorts of performances it has for roughly the last five decades.

Audium is a unique and highly specialized theater. The room where the performance takes place is actually a building-within-a-building, completely isolated from outside sounds. About four dozen chairs are arranged in three concentric circles, with 169 speakers of all shapes and sizes located around the room. Some speakers are suspended from the ceiling, or hidden behind the walls, under chairs, or beneath the floating floor. You’re completely surrounded by speakers, so all seats are equally good. It’s almost like being in a planetarium, except there’s nothing to see—the performances take place in complete darkness. You come to Audium to experience a total immersion in sound.

Sounding Out an Idea

The idea for Audium was conceived in the late 1950s, when electronic music was beginning to appear. A pair of classically trained, professional musicians became interested in exploring the role space played in composition and performance. Not content with two channels of sound, they wanted to know what it would be like for sound to move all the way around, above, and below the audience—using space itself as an instrument. Composer Stan Shaff and his partner, equipment designer Doug McEachern, began a long collaboration. Shaff conceptualized the sounds and effects he wanted to achieve, and McEachern figured out how technology could bring those ideas to life.

In the early 1960s the first Audium concerts were held at universities and museums in San Francisco. In 1965, the first Audium theater was created, and after a grant from the National Endowment for the Arts in 1972, construction began on the current building. Since it opened in 1975, the current Audium at 1616 Bush St. has given weekly performances. Shaff still sits behind the console, and McEachern updated the equipment numerous times over the years.

Echo of the Past

Everything about Audium is analog—there’s not a CD player, computer, or digital effects processor in sight. Considering the vintage of the technology, the sound quality is startlingly pure. On a good night, with the controls handled expertly, there simply isn’t any hiss or buzz. Every sound is bright and vibrant. Shaff said he gave a special concert in the early 2000s for a group of engineers from Dolby, who were impressed by Audium’s use of technology. It makes Surround Sound seem downright pedestrian. Still, the engineers said, composers and soundtrack designers would have to learn entirely new skills to be able to create sounds for an audio environment as rich as Audium.

Visiting Audium is like stepping back in time. The building’s architecture, décor, and the performance itself are pure 1970s. When you arrive, you buy your ticket at the box office (cash only, of course) and proceed into the foyer. The first thing you notice, appropriately enough, is sound. There’s a faint but steady drone that sounds like a discordant organ. As you adjust to the sound, you also adjust to dim lighting and begin to study the abstract sculptures and prints lining the walls. Meanwhile, hidden speakers on every surface play seemingly random sound effects—voices, waves, ticking clocks. On one wall, a ghostly green projection of a clock face shows the current time. The total effect is one of intriguing eeriness. But it’s eerie in a very particular way: you begin to notice, almost subliminally, that the entire experience reflects the sensibilities of a bygone era. Everything around you must have seemed extremely modern when it was built, but there’s a complete absence of any artifacts, sounds, or scents of the post-computer age—right down to the powdered soap in the lavatories. But the unselfconsciously anachronistic setting is quite endearing.

Pay No Attention to That Man Behind the Curtain

Let me tell you about my most recent visit to Audium. At precisely 8:30 P.M., Stan Shaff pulled aside a black curtain and introduced himself to the 20 or so members of the evening’s audience. After a few words of explanation about the performance, he led the group through a dark, twisty hall called a sound labyrinth and into the performance space. As the lights went down, Shaff seated himself behind a customized console of knobs and levers in a small control booth. He then began what he refers to as sculpting sound. While taped recordings of all sorts of sounds played, Shaff manipulated their positions, speed, and volume in real time. So although the content was fixed, the performance itself was dynamic, changing significantly from night to night.

The sounds we heard were dreamlike, evoking unexpected memories and emotions. There might be children playing, an airplane taking off, a flushing toilet, or a marching band. Interspersed with the natural sounds were the textures of old analog synthesizers—not melodic for the most part, but aleatory—sometimes playfully so, other times harshly serious. The show was not a musical work in the conventional sense, but rather a sound performance in the best tradition of experimental twentieth-century composers such as Arnold Schönberg and John Cage.

The show lasted about an hour and a quarter, including a brief intermission. As the sound faded away and the lights returned, the audience simply sat there, silently, for several minutes. For some, perhaps it was simply a matter of waiting for a cue that the show was really over and it was time to leave. But I think most of the audience was still savoring the experience, pondering the strange sensations and impressions of this unique performance. I left pleasantly disoriented, having to readjust to the sounds of the city with their conventional directionality.

Audium performances are held every Thursday, Friday, and Saturday night promptly at 8:30. Audium does virtually no advertising, so Shaff never knows what to expect. On some nights, he said, the show sells out; on others, it’s just him and his wife. But he’s quick to point out that it’s not a commercial venture so success isn’t measured in numbers. What is important is his unique art and the impressions it leaves on the audience—including, he hopes, future generations of composers who will take up the torch of omnidimensional sound sculpture.

Note: This is an updated version of an article that originally appeared on Interesting Thing of the Day on April 14, 2003, and again in a slightly revised form on October 10, 2004.