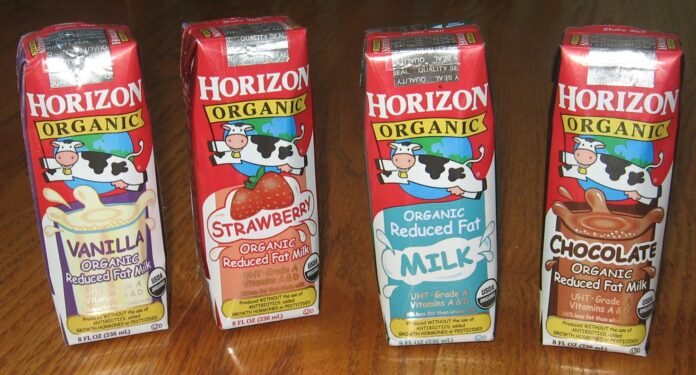 I’ve managed to suppress most of the memories of my college days—quite wisely, I think—but every once in a while some random factoid springs to mind. For example, I remember clearly the wonder I felt one evening in the mid-1980s when I walked into a New Jersey supermarket and saw a box of milk on the shelf. At first I didn’t comprehend what I was looking at. I had to study the package at some length before I grasped that this was not powdered milk or some milk-like nondairy product. Sitting there quite happily at room temperature was a container of milk that, so the label claimed, would remain fresh without refrigeration for months. I couldn’t figure out how they’d managed to pull this off, but I was excited. Just think of the convenience of not having to buy milk every few days, not to mention saving space in your refrigerator! I bought a box and tried it. OK, the flavor was a bit less than fantastic, but still…pour it on some cereal or in your coffee and you’d never know the difference. This revolutionary development seemed so obviously useful to me that I was certain all milk would be sold this way within a couple of years.

Time passed—months, years, and then decades. The boxes of milk, instead of multiplying on store shelves as I’d expected, disappeared almost entirely. I found this completely baffling. Why hadn’t this sort of milk caught on? I was even more surprised when I went to Europe and discovered that in many places, it’s much harder to find refrigerated milk than boxes or bottles of milk stored at room temperature. So clearly the technology to package milk this way was still in use…but did those Europeans know something that we didn’t? Or was it the other way around? I decided to investigate.

In order for milk to stay fresh at room temperature, two things are required. First, it must be completely free of any bacteria or other microorganisms; bacteria, after all, are what cause milk to spoil. Second, the milk must be packaged in such a way that it can’t be contaminated after the fact. The packaging must also keep out light, which can cause the breakdown of nutrients such as Vitamins A and D. To rid the milk of bacteria, dairies employ a process known as Ultra High Temperature pasteurization, or UHT for short. The specially treated milk is then stored in aseptic packaging, which preserves the sterility of its contents for long periods of time. Together, UHT processing and aseptic packaging give you milk with a shelf life of six to nine months, as long as the package is unopened.

Pasteurization is simply a matter of heating something hot enough and long enough to kill pathogens—disease-causing germs. To pasteurize milk, you can heat it to about 140°F (60°C) for a half hour, or for faster results, increase the temperature to 163°F (73°C) and reduce the time to about 15 seconds. This makes milk safe for human consumption, and in the process, dramatically reduces the number of bacteria that cause spoilage—enabling the milk to remain drinkable for a week or so, as long as it’s refrigerated. Pasteurization has little or no effect on either the flavor of milk or its nutritional content. It does, however, leave some viable microorganisms, which multiply over time—especially after the milk is exposed to air.

UHT pasteurization, on the other hand, destroys virtually all bacteria and spores. To do this, it heats the milk to a much higher temperature—around 275°F (135°C)—for about two seconds, then rapidly cools it back to room temperature. Because the exposure to heat is so brief, the milk is not damaged and remains nutritionally intact. However, UHT processing can have a noticeable effect on the taste. (I was tempted to say something about the added flavor coming from the corpses of millions of microbes, but that would have been…in poor taste.)

Meanwhile, the packaging itself must also be sterilized, and it must be filled with milk and sealed in a sterile environment. The most common form of aseptic packaging is a box made from layers of polyethylene, aluminum foil, and cardboard. The plastic keeps the package airtight, the foil keeps out light, and the cardboard provides structural integrity. This type of package is sometimes called a “drink box,” and is commonly used for fruit juices. But the boxes can be made in nearly any size or shape. Specially designed opaque, aseptic plastic bottles have also come into use, though boxes use space more efficiently and are therefore easier to store and transport.

UHT pasteurization and aseptic packaging are becoming more and more common not only for fruit juices but for soups and broths, sport drinks, soy beverages, pasta sauces, coffee drinks, and other liquids. But if this technology is so wonderful, why do we so seldom see it used for cow’s milk in North America?

According to one theory, it’s all about the taste: if the milk in a box doesn’t taste exactly like milk in a bottle, consumers won’t buy it. True enough, the taste is slightly different. But in defense of UHT milk, its flavor has improved quite a bit over the last few decades. As long as it’s refrigerated before it’s served, many people will be unable to distinguish it from conventional milk. Moreover (according to some tasters, at least), lower-fat varieties of UHT milk taste better than whole UHT milk—and North Americans certainly buy more lowfat milk today than they did when UHT milk first appeared. Furthermore, let’s be realistic: in the United States, at least, consumers overwhelmingly choose convenience over flavor—just look at the popularity of American cheese, instant soup, and frozen vegetables, to say nothing of the entire fast-food industry. In short, I don’t think taste is the real problem.

Perhaps the issue is cost. UHT milk does cost more than refrigerated milk. This is due in part to the high cost of the equipment needed to package it, and in part to lower demand. Needless to say, if consumers adopted a preference for UHT milk, the price would eventually come down. After all, producers and supermarkets would save money in the long run on energy bills and transportation, as well as reducing waste due to spoilage.

But even though higher costs may be part of the problem, I think the real issue is one of habit. Because we’re so deeply conditioned to believe that fresh milk is something that can only be sold in cold bottles, we regard anything else as suspicious. “What could this mean? Does it contain scary hormones? Was it treated with radiation? Will I spontaneously change my political affiliation if I drink it?” These are the sorts of worries that can only be alleviated by proper education, by which of course I mean good advertising. Hey, wait a minute—did I just say we need more advertising? I never would have said that back in college. Maybe there is something in this milk.

Note: This is an updated version of an article that originally appeared on Interesting Thing of the Day on June 19, 2004.