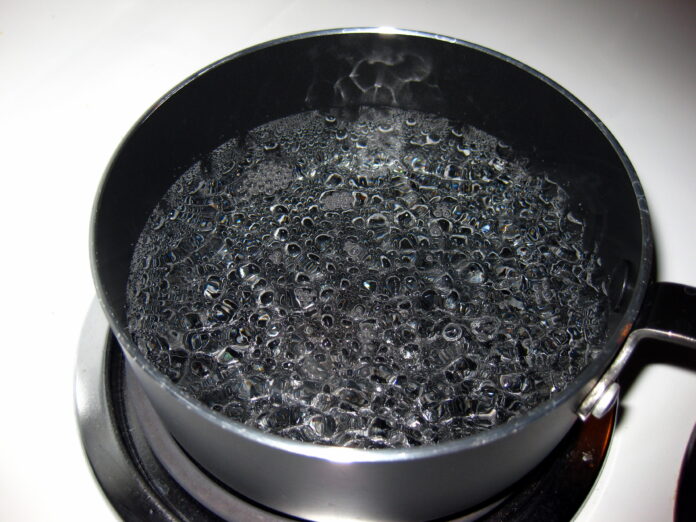 Chemistry was one of my favorite classes in high school. I remember on one occasion, our teacher gave us all a very strange and difficult assignment. It was a list of “real-world” questions to which chemistry could presumably provide the answers, and we were given several days to figure them out, with complete freedom to consult libraries or any other available sources to get the information. One of these questions had to do with the freezing point of water. I no longer remember the exact wording, but the gist of it was that if you had two wooden buckets of a given size, one containing hot water and the other containing cold water (with precise temperatures specified in each case), and if you exposed said buckets to an air temperature of such-and-such, which one would freeze first? The obvious answer, of course, would have been the one with colder water, which led us to believe that this must be the wrong answer. However, it was not sufficient to provide the correct response; we had to justify the answer based on our knowledge of chemistry. Well, despite a great deal of research—and bear in mind, this was back when research meant looking at books rather than searching the web—I came up empty-handed. I left that one blank, and to make matters worse, I happened to miss class on the day the assignment was discussed, so I never found out the solution to this mystery.

Years later, I was to discover that there are a number of urban myths about the boiling point and freezing point of water, with “hot water freezes faster” being just one of them. I scoured a bunch of websites, and came up with contradictory information. But this is not, after all, rocket science—there’s no reason I should have to live with uncertainty about something so easily demonstrated. So I decided to conduct my own experiments and find out for myself. Although I didn’t have a wooden bucket handy, I did have a freezer, a stove, some water, and a digital thermometer. I’ll tell you the results of my experiments in just a moment. But first, here are some of the interesting claims about water I found.

So, given what I knew should happen, here’s what actually occurred in my experiments.

Freezing Water: I started with three identical glass containers, each holding 100ml (about 3.5 fl. oz.) of filtered water: one at room temperature (72°F/22°C), one at the same temperature as my hot water tap (115°F/46°C), and one boiling (212°F/100°C). I put all these into my freezer, which had an air temperature of 0°F (–18°C). I knew that the water would not turn from liquid to ice all at once, and I puzzled over when to consider the water “frozen”—when the first ice crystals appeared, when the water was completely solid, or what? I eventually decided on an arbitrary standard for frozenness: the time at which a wooden chopstick dropped into the center of the container would no longer touch the bottom, meaning the water was mostly but not entirely frozen. I checked each of the containers every five minutes. The results? The room-temperature water froze in 50 minutes. The hot water froze in 80 minutes. And the boiling water froze in 95 minutes. My verdict: no contest—not even remotely close. Given the conditions in my freezer and the water I used, I was unable to reproduce the Mpemba effect.

I also tried a container of previously boiled water, now at room temperature. It froze in 60 minutes—more time (not less) than the unboiled water had taken, but not by much.

Boiling Water (with salt): I added a generous 2 tablespoons of table salt—much more than most people would ever use for boiling pasta or vegetables—to a mere 1 liter of water. It boiled in 6 minutes, 33 seconds (versus 6 minutes for unsalted, room-temperature water) and reached a temperature, according to my thermometer, of 216°F (102°C). So clearly the salt had an effect, but not much of one—and this was with an uncommonly high concentration. My verdict: Add salt to water if you want to season it, but don’t expect it to make any significant change in the water’s boiling time or temperature.

Now, I freely admit that my kitchen is no laboratory, and that any number of variables could have influenced the outcome. My measurements may have been imprecise. My freezer may have had uneven zones of warmer or colder air. My glassware may have been contaminated. And so on. But whatever may occur under ideal conditions in a laboratory, when it comes to freezing or boiling water in an ordinary kitchen, common sense prevails.

Note: This is an updated version of an article that originally appeared on Interesting Thing of the Day on April 16, 2005.