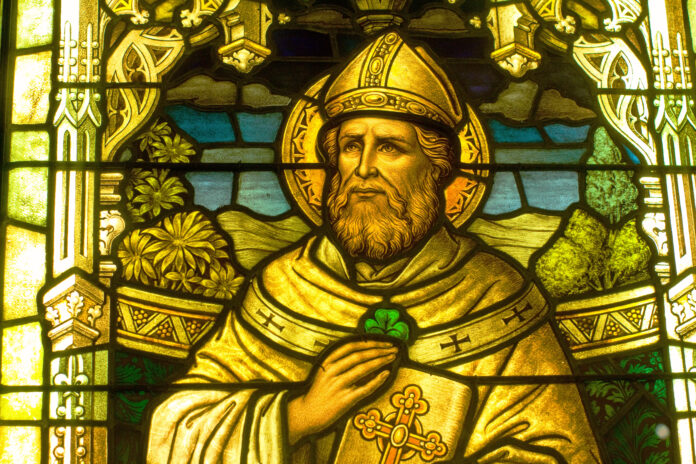 Many years ago, I read the following provocative statement in a trivia book: “St. Patrick was neither Irish nor Catholic.” Although, as in most trivia books, these claims came with no historical references to back them up, they sounded plausible. I had no particular reason not to believe the book, and I tucked these tidbits away in my brain’s “interesting facts to investigate one of these days” file. I’ve been digging into that file a lot lately, and this seemed to be an appropriate time to get to the bottom of who St. Patrick really was—and which of the numerous and contradictory stories about him have some basis in truth.

Not being Catholic myself, I never learned even the basic facts (or legends) about most of the saints—information that, I recognize, is common knowledge to a large segment of the population. On St. Patrick’s Day, all I ever managed to deduce was that we were all wearing green because that had something to do with Ireland; any information about the historical St. Patrick was not part of my secular experience of the holiday. I didn’t even know that he was supposed to have expelled all the snakes from Ireland—after all, I’d never seen a snake on a St. Patrick’s Day card. As I read up on St. Patrick, pint of Guinness in hand, I discovered that one of the most interesting things about this man is how little one can know for certain.

The Mists of History

Confusion starts at the very beginning: Patrick’s birth. We can say with confidence only that he was born in the late 4th century or early 5th century; most accounts put the date between 385 and 389 CE, though some say it was much later. At any rate, it wasn’t even “Patrick” who was born then. His given name at birth was—according to some sources, at least—Maewyn Succat, and he apparently took on the name Patrick as an adult, when he began his work for the Church. As for Patrick’s place of birth, again, this is a matter of some disagreement. In one of his writings, Patrick referred to his birthplace as “Bannavem of Taburnia,” but no one knows for certain exactly where this village may have been. Sites in Scotland, Wales, England, and even the north coast of France have been advanced as possible matches. Patrick’s parents were likely Christians of some variety, though apparently not terribly devout, and Patrick may have considered himself a pagan as a child.

We do know that when Patrick was a teenager, he was captured by pagan raiders and taken to Ireland, where he was sold as a slave to a Druid chieftain. During his captivity, his Christian faith apparently blossomed. He remained a slave until roughly age 22, when he somehow managed to escape and return to Britain. Patrick began studying for the priesthood, and in either 432 or 462, after he was ordained, he returned to Ireland—this time as a missionary. He was not, as is often assumed, the first Christian missionary to Ireland, but he was among the first—perhaps the third.

It was during this time that the most colorful of Patrick’s exploits allegedly occurred. The best-known of these, of course, was that Patrick, by the force of his prayers, banished all the snakes from the island. Ireland likely never had any snakes in the first place; the story may have evolved from a symbolic association of snakes or serpents with non-Christian religious beliefs. In any event, there is no evidence whatsoever that this actually happened, nor does the Catholic church claim that it did.

Legend also has it that Patrick taught the Irish pagans about the concept of the Trinity using a shamrock as a visual aid. This story is almost certainly apocryphal, meaning the whole association of the shamrock with St. Patrick’s Day is based on a mistake. But in fact, it gets worse: because the shamrock is green and was traditionally worn as a symbol of St. Patrick, the color green itself eventually took on the same meaning. As it turns out, though, the color blue was originally assigned to St. Patrick, and for centuries, Irish superstition held that wearing green was unlucky. Patrick is, however, credited with inventing the Celtic cross; he felt that by superimposing the pagan symbol of the sun on a cross, he could make it more appealing to the Irish people he was trying to convert.

So what about that claim that St. Patrick was not Catholic? Well, the Catholic church clearly believes he was, but some Protestant commentators claim he was not. Among the reasons for these claims are statements from Patrick’s writings that indicate he practiced, and preached, a fairly simple version of Christianity in Ireland—seemingly not a fully Romanized version. There is also some doubt about his parents’ status in the Church, and a suggestion that only centuries after his death did Rome decide to absorb his story into official Church history. On the other hand, there is substantial evidence that Patrick was indeed ordained as a priest in the Roman church before beginning his missionary work. But the bottom line is that reliable written records from that period are few and far between. The true nature of St. Patrick’s religious convictions, like so much else about his life, will probably never be known with complete certainty.

Even the date of Patrick’s death is in doubt. It has been reported variously as occurring in the years 462, 491, 492, or 493. However, tradition has it that in whichever of these years Patrick died, it was on March 17—which is why the Feast of St. Patrick, or St. Patrick’s Day, is celebrated then. On this day, as I don my green—or blue—shirt, I will think fondly about the patron saint of Ireland, who was not Irish, who may or may not have been Catholic, and who was almost definitely, at some point during the indeterminate years of his life, named Patrick.

Note: This is an updated version of an article that originally appeared on Interesting Thing of the Day on March 17, 2005.