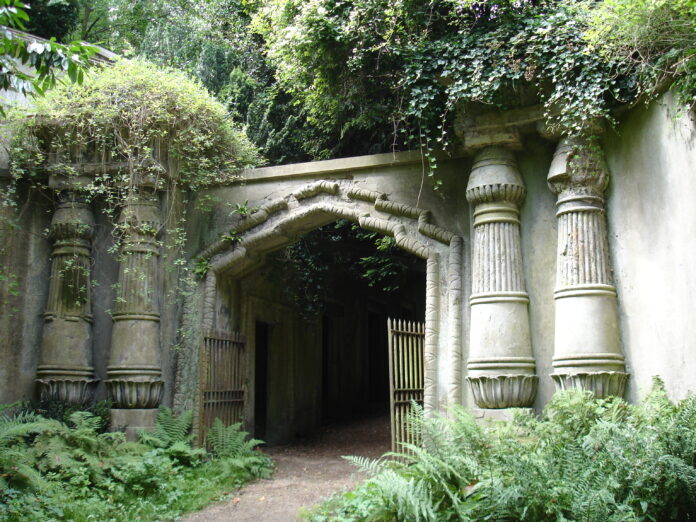 London has hundreds of popular tourist spots that attract millions of visitors each year. I admit, I did the whole Big Ben to Westminster Abbey to Buckingham Palace to Tower of London circuit and I enjoyed it. I loved being able to walk out of the hotel and onto a street that contained a 500-year-old house right down the block from a modern tube station and an Indian curry restaurant. But the intricacies of this city, like any city, are often found off the beaten path.

Both my visits to London have included a hike up Highgate Hill and then a walk down the small, winding lane leading to Highgate Cemetery. Many are familiar with London’s abbeys and churchyards, but the real appeal of dead London is Highgate, often referred to as a Victorian Valhalla.

Well, We Can’t Just Put Them on the Streets

Highgate Cemetery was established in 1839. Around this time the church graveyards were becoming quite full, and rather than dump the dead out on the streets, Parliament established seven private cemeteries to be located within London proper. In 1954, when the popularity of burial at Highgate was at its peak, a second part of the cemetery was opened to accommodate all the new “arrivals.” This newer cemetery was coined the East Cemetery, leaving the older side to be called, naturally, the West Cemetery. During the bone yard heyday, both cemeteries had elegant parades of well-dressed mourners following caskets to elaborate tombs and mausoleums. Later, when cremation became legalized, the processions of ornate funerals halted and both cemeteries were maintained less and less. Eventually, in 1975, the West Cemetery was closed altogether and efforts were put into maintaining the East side.

Luckily, a group called “The Friends of Highgate Cemetery” was formed and in 1981 procured both sides. To this day they are responsible for upkeep of the 37-acre sprawl encompassing both cemeteries. However, the West Cemetery, sometimes called a “maintained wilderness,” had become so overgrown that upkeep involved maintaining and restoring the tombs but only clearing the vegetation along the paths and around the nearer graves.

A Garden of Dead People

Highgate does manage to attract a few tourists due to its most famous “resident,” Karl Marx. Marx, along with Michael Faraday and other historical notables, is buried in the East Cemetery. This side, although it exhibits manicured lawns and moderately-kept headstones in some areas, has wooded stretches where the paths disappear into the trees, and headstones are crowded amongst ivy, moss, and each other. It resembles the scene of a ghostly movie; in fact, the cemetery has been the set of a few horror movies. And yet I found, even in this green expanse dedicated to housing dead people, a sense of tranquility, mixed with an overwhelming fascination. This place just exudes mystery.

Even more mysterious is the West Cemetery. While access to the East Cemetery is open to the public (for a modest fee), the West Cemetery has tours by appointment only (for a slightly higher fee). The day I booked my tour it was overcast and gloomy, with an ever-present threat of rain, the perfect backdrop for a necropolis jaunt. The entrance to the West side is a daunting structure, once a chapel with two sides—one for Anglicans and the other for non-Anglicans (or “dissenters”). A tunnel runs under the lane that divides the cemeteries so a body would not have to leave consecrated ground on its way to be buried.

For Your Mental Safety, Please Stay With the Group

Our guide led us through the chapel gate onto the stones of a courtyard. It was eerily quiet here, making it hard to believe that we were still in London. From my vantage point, the cemetery itself was hidden; it was located up a tiny hill behind the chapel and beyond the courtyard. The trees, bushes, and overgrowth cleverly hid nearly all the signs of headstones.

At the top of a stone stairway leading into the cemetery, a path began, and a stretch of graves ambled up either side among the tangles of vines and growth. The variety of graves was amazing. Small markers were ensconced amongst larger markers that bore angels and broken columns, crosses and torches. Many looked as if they would disappear overnight into a fit of ivy and other creeping vegetation.

The path continued through the archway located in the middle of a foreboding stone structure. Flanking the arch were two sets of hulking columns. The guide explained that this was the entrance to Egyptian Avenue, a row of continuous family vaults that form an alley leading up to the Circle of Lebanon. The doors to the vaults were adorned with various funerary symbols signaling the passing of life into death, and as we walked on I got a creepy, tingly feeling.

On other side of Egyptian Avenue was the Circle of Lebanon, another series of continuous vaults with an inner and outer circle. In the outer ring was a columbarium, a place for storing the ashes of those who have been cremated. In the inner ring, a large, sprawling cedar tree was perched in the soil above and between the vaults. The tree itself was here before the cemetery was even built, and its position high above the cemetery contributed to the spooky feeling.

Located behind the Circle of Lebanon was the tomb of Julius Beers, the largest and most ornate tomb in the entire cemetery. It was built to block the view of London from the terrace of the church directly behind the cemetery that Londoners often would enjoy after Sunday service. Under the terrace was a catacomb of tombs that was closed off to the tour. The vaults themselves could not be seen, and only a gated entrance led into the darkness under the stone. While listening to the tour guide explain the history of the tomb, we rested our backs against the cool stone of the terrace. I had my back to the gate of the entrance just to scare myself a bit. After a few minutes of listening to the guide, a dull thudding noise came from behind the gate. Apparently I wasn’t the only one who heard it, as the other members of the group looked nervously around. As we slid away carefully, we heard the noise again, only louder. Was the guide playing a well-timed prank on us?

Along the eastern edge of the cemetery, more mausoleums and tombs stretched along either side of the path. At one time these tombs were ostentatious displays of wealth, but now they looked worn and frail. Near this part of the cemetery was where the dissenters were buried, in an area apart from the Anglicans.

You Mean There’s Something Out There?

Some subsequent web searching revealed that, aside from the physical mysteriousness of the cemetery, there were a few stories of the supernatural. The most interesting of these is of the Highgate Vampire. In the late 1960s, following a string of alleged spectral sightings and the accumulation of blood-drained animals in the cemetery, rumors circulated that a vampire was roaming Highgate. Several people claimed to have either encountered or been attacked by the vampire.

Various occult experts undertook rituals to purify the cemetery and rid it of the vampire, but conflicting accounts of these activities and their results led to feuds that persist to this day. Vampire investigations are reportedly ongoing. Needless to say, the entire existence of the Highgate Vampire is controversial, and the Friends of Highgate Cemetery would rather ignore it, in order to keep outsiders from breaking into the cemetery in search of the bloodthirsty apparition.

Vampire or not, Highgate Cemetery is the most interesting cemetery I have ever visited. Its isolation, desolation, and eerie scenery make it akin to a real-life movie.

Note: This is an updated version of an article that originally appeared on Interesting Thing of the Day on June 2, 2006.