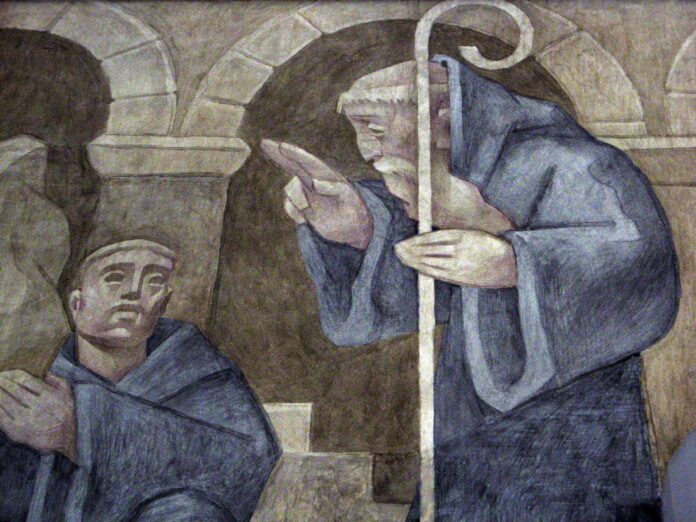 Thanks to Kathleen Norris, being a Benedictine oblate is almost hip these days. Norris is the author of the critically received books Dakota: A Spiritual Geography and The Cloister Walk. Both tell the story of a literary New Yorker who moved to the Great Plains and found a spiritual life at—of all places—a Benedictine monastery. More than any other person since Thomas Merton, Norris has helped rekindle interest in monastic spirituality among the “thinking crowd.”

While I’d like to think that I became a Benedictine oblate before reading Norris (somehow I think it is morally superior to choose a path before it becomes popular), the truth is that her ruminations on the relevancy of Benedictine spirituality for contemporary life were formative in my own choice. I became an oblate of a small Benedictine community in Oakland, California, in 1999.

The Life of a Saint

So what is a Benedictine oblate? “Benedictine” does not, in this case, refer to the liqueur of the same name (although that liqueur is made by Benedictine monks in France). Rather, Benedictine means an association with the monastic order based on the teachings of St. Benedict, himself worthy of a separate column on this website. St. Benedict was born in 480 CE, 70 years after the fall of Rome. He came from an educated, wealthy family but eventually left that life behind to pursue the spiritual life. Over time, his reputation as a holy man spread, disciples flocked to him, and he eventually established 12 small monasteries.

All monastic communities require some kind of “rule of life” that orders their common spiritual life together. In Benedict’s time, there were several monastic rules in circulation. The most popular one seems to have been a document called The Rule of the Master. Benedict drew from this rule, but with significant changes—mainly in spirit and tone. The Rule of the Master saw monastic communities as a group of individuals gathering around the feet of a sage (usually the abbot), to whom was given enormous power. Benedict, instead, emphasized the relationship of the monks to each other. He saw the monastery as a community of love and the abbot’s main job as tending to the well-being of this community. In addition, The Rule of the Master was harsh and unrelenting in its demands on the monks. Benedict’s rule was known for its moderation, its humanity.

Benedict’s rule ended up having an enormous influence on Western civilization. At the time of Benedict’s death, his rule was one among many. However, within a century or two, the Rule of St. Benedict had become the norm for Western monasticism. And monasticism had, by this time, become the norm for what was left of Western civilization. Monasteries were, by the sixth century, the one vital institution left in the societal breakdown precipitated by the fall of Rome and the waves of “barbarian” invasions. Benedictine monasteries accumulated illuminated manuscripts and works of art, kept the light of learning and scholarship alive, and generally provided order and stability in a chaotic world. As the Benedictine scholar Esther de Waal writes, “To sketch the history of the Benedictines in the Middle Ages would be not only to write a history of the church, it would be to write a history of medieval society as well.” (From Seeking God: The Way of St. Benedict, pg. 21.)

Although not as numerous as in their heyday, there are still today hundreds (if not thousands—I couldn’t find an exact number) of Benedictine monasteries around the world. What’s most interesting to me about contemporary Benedictine life, however, is the number of lay men and women who have found spiritual sustenance in the Benedictine rule and in the spirituality it expresses. The test of its popularity? Go to Amazon.com and type in “Benedictine spirituality.” You’ll get hundreds of titles, most published quite recently.

Which brings me to the second word in the phrase “Benedictine oblate.” In the most general sense, an oblate is someone who makes an act of oblation. (That explains everything, right?) An oblation literally means “an offering.” So an oblate is someone who makes an offering of themselves—that is, someone who dedicates themselves to a spiritual life. More specifically, oblates are lay people who take an abbreviated form of monastic vows (called “promises”) and become associate members of a particular monastic community. The promises are considered to be for life and are not tied to that particular monastic community—so if you move, you are still an oblate, even if you have no regular contact with the monastic community in which you made your promises. No getting out of them that easily!

Oblate promises differ from community to community, but most of them (and this was certainly true of my own) will be based on the three vows taken by all Benedictine monks:

In addition to the above three ideas, oblate promises would also tend to include some language that says the oblate will follow the Rule of St. Benedict insofar as one’s station in life allows. Now, I confess that to simply sit down and read the Rule of St. Benedict leaves me a little cold. As with the Bible, I need modern scholars to help interpret the relevancy of this book for my life. Thankfully, there are many such books available. My favorite authors are the already-named Norris and de Waal, and also Joan Chittister, a Benedictine nun and rabble-rouser. I’d recommend any of their books on the subject.

An Ancient Rule for Postmodern People

One of the things I appreciate most about Benedictine spirituality is its emphasis on moderation and balance. Nothing is to be taken to the extreme. For instance, it recognizes the need both for community and for solitude. As a person brought up in a relentlessly community-minded Anabaptist tradition, I have found this an important balance. I love my community; I also need holy solitude on a regular basis. And while Benedictine life is centered around prayer, it’s understood that this must be balanced by work (with a historic emphasis on manual work) and scholarship. Although this insight may seem rather self-evident, I have found it quite helpful in practice. When I feel out of balance, I ask myself, “What do you need, Soul? Do you need to go out in the garden and pull weeds; do you need to read a challenging book; or do you need to sit down and meditate?” The question is always helpful, and usually yields the answer I need.

It’s fascinating to me that contemporary men and women have a common bond with those first small monastic communities founded 1,500 years ago. Our lives couldn’t be more different, and yet both I (a married, Mennonite woman) and a celibate, Catholic monk of 600 CE have found a foundation for a vital spiritual life in the writings of St. Benedict. In a time when new spiritual fads abound, I find this kind of continuity and stability comforting…and possibly even hip.

Guest author Sheri Hostetler is the pastor of First Mennonite Church of San Francisco. The Benedictine community to which she belongs is called Hesed. It is a non-resident community made up of laypeople from a variety of Christian denominations who are committed to the practice and teaching of Christian meditation.

Note: This is an updated version of an article that originally appeared on Interesting Thing of the Day on September 1, 2003, and again in a slightly revised form on August 12, 2004.