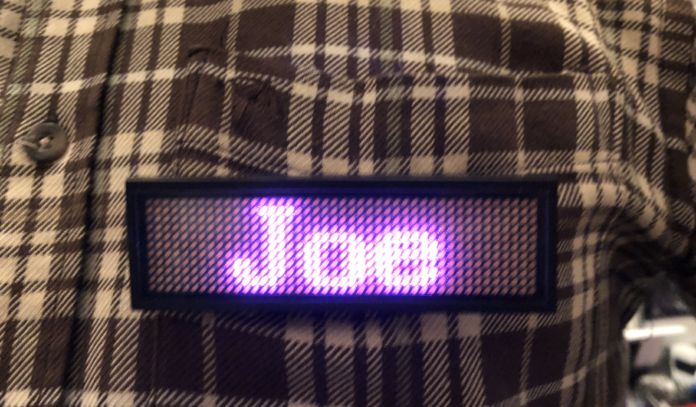 One day I received a package in the mail from a company I’d never heard of. Inside was a black T-shirt with the words “Joe’s Shirt” in huge, bold white letters. There could be no doubt that it was for me, but I certainly didn’t order it. I looked on the packing slip and found the name of the person who ordered it—an acquaintance of mine who would not ordinarily buy me clothing. I tried to remember if there might perhaps be some favor he was repaying or an inside joke we had shared, but I drew a blank. I sent him a note that said, “Thanks for the lovely theft-proof shirt, but…what’s the occasion?” He replied, “I saw it in a catalog and died laughing. I decided that you simply MUST own one.” That’s good enough for me.

As it happens, I’m a fan of name tags from way back. I usually try to have tags around when I throw a party, and Morgen and I even passed them out to guests at our wedding. Some people don’t understand why they should use them, and others decide to write in a nickname, alias, or silly comment. But to me, name tags seem like a simple and straightforward solution to the common problem of forgetting—or being unable to determine—someone else’s name.

It can be uncomfortable to interact with people whose names you don’t know, especially if you see them regularly at work, school, or church. And for most people, a single mention of someone’s name is insufficient to imprint it on their memory. I can’t count the number of times I’ve been introduced to someone, or heard an introduction during a meeting of some kind, and then later forgotten the name or gotten the person confused with someone else. And every time someone comes up to me and says, “John, isn’t it—or Jim?” I know they’ve had the same experience.

This is not a trivial problem. Even if you’re a gregarious person who freely introduces yourself to everyone you meet, and even if you are blessed with a perfect memory, there’s no guarantee that everyone will remember your name. Whether it makes any difference to know someone’s name depends a great deal on the social context. If your job is selling popcorn at a cinema, arguably there’s little value (or even negative value) to learning the names of each of your customers; that would only slow down every transaction. But for situations in which you’re likely to encounter a person over and over again, a name is probably the most useful piece of information you can have about someone.

Meetings, conferences, and seminars are of course the places where you’ll most likely see people wearing name tags. I attend a fair number of tech conferences, where attendees are usually given name badges that hang around the neck. I’m always amused at these shows when I shake hands with someone I know casually but haven’t seen for a year. Instead of being met with eye contact, I watch the person’s eyes linger on my solar plexus for a second before bouncing up to my face. But I don’t mind, because I do the same thing; it helps ease a great deal of awkwardness, as appearances change and memories fade.

A man by the name of Scott Ginsberg made a significant stir in the media around 1999 when he started wearing a name tag that says “Scott” all day, every day—and even to bed. (He’s still at it, nearly two decades later, and earned a place in the Guinness Book of World Records for his accomplishment.) During college he wore a name tag at a convention and decided to keep it on afterward just to see what would happen. He found that he met more people, and those he met were friendlier to him. He also found that it made him friendlier and more approachable; there’s a subtle psychological pressure to smile more, to be more outgoing and polite, when you know people know your name. His experiment was so successful that he began wearing name tags all the time, and even wrote a series of books about his experiences, starting with Hello, My Name Is Scott: Wearing Nametags for a Friendlier Society. Scott says he’ll wear name tags to the grave—literally—he even had a name tag tattooed onto his chest!

First, Last, or Other

This may be an unfair oversimplification, but I think most people unconsciously divide the world into “people I have some sort of relationship with” and “other.” My own experience is that I tend not to take people in the “other” category as seriously; if I don’t make eye contact, or am not especially polite, it somehow doesn’t really matter. (I notice this especially when I’m in someone else’s “other” category.) When I know someone’s name, though, it makes that person seem like more of a human being, more deserving of respect and genuine interaction; this seems to be equally true when other people know my name.

Retail stores understand this principle. When you walk into a supermarket or clothing store and see employees wearing name tags, it’s not only a signal that this person knows where to find things and can answer questions; that need could be met by a generic tag that says, “I work here.” A name tag goes a step further by making the employee more approachable—this is Amanda, not “Gap salesperson.”

A Joe by Any Other Name

But customers should get to wear name tags too, at least in stores where clerks are expected to address the customer by name. Unfortunately, clerks usually don’t find out my name until the very end of the transaction when they read it off a screen after I’ve swiped a loyalty card or payment card, so the only time they can use it is as I’m leaving: “Thank you for shopping at Old Navy, Mr. [pause] Kissell.” But more often than not they mispronounce my name, and besides, using my surname doesn’t have the right effect, because that’s not how I like to be addressed. I’m not “Mr. Kissell,” and I’m definitely not “Mr. Kiss-SELL.” I’m not “Joseph,” either, except in waiting rooms or when my mother is angry at me. And only people who knew me when I was in diapers would ever call me “Joey.” I always prefer to be called “Joe.” But with only a credit card, driver’s license, or passport to go by, a stranger has no way to know that.

A couple of years ago at a conference, I saw a guy wearing a green LED name tag with a scrolling display that showed his name and various social media handles. I thought that was brilliant, and told him so. I also said I had to own one of those—were they available in purple? He said he was pretty sure they were. Sure enough, I eventually found one (they were hard to find at the time and are even harder to find now, sorry). It came with Windows-only software on a 3-inch CD, so it took quite a bit of doing to program it using my Mac, but I eventually did, and now I have an eye-catching way to tell people not only my name but also how to contact me (or whatever else I want to say). It’s pretty cool.

If name tags are such a great idea, why doesn’t everyone wear one all the time? Personally, I don’t think that’s such a bad idea, and if everyone did it, it wouldn’t seem goofy. But the usual objection is one of privacy, or at least anonymity. Some people simply don’t want others knowing who they are, and don’t want to give an opening for strangers to start a conversation. That’s fair enough, I suppose, in a crowd or on the street—or if you’re a secret agent, say, or a superhero. But for most people in most situations, I suspect the social benefits of knowing each other’s names would outweigh the inconveniences.

Note: This is an updated version of an article that originally appeared on Interesting Thing of the Day on July 22, 2003, and again in a slightly revised form on January 12, 2005.