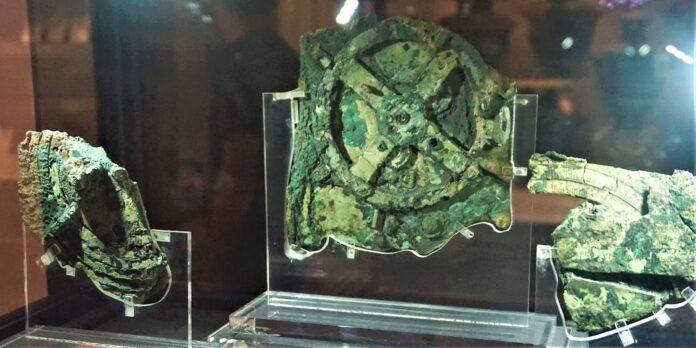 The ancient Greeks were responsible for such marvels as the catapult and the camera obscura. They invented the astrolabe, a forerunner of the sextant, which aided marine navigation by (among other things) measuring the angle between the horizon and the sun or other celestial bodies. By the end of the first century BCE, they had even invented the odometer, which measured the distance a cart or carriage traveled. So when it comes to engineering, they were no slouches. When it comes to preserving their most advanced inventions for posterity…well, that’s another story. At the beginning of the 20th century, historians were shocked to learn that Greek thinkers had built a rather sophisticated analog computer in the neighborhood of 82 BCE and then, astonishingly, left no record of its existence.

In 1900, a ship carrying Greek sponge divers was blown off course in a storm. They anchored near the small island of Antikythera, and decided that as long as they were there, they might as well dive and look for sponges. What they found instead was a shipwreck, under about 42 meters (140 feet) of water. Returning later with a navy ship, the divers recovered many artifacts from the sunken vessel, including marble and bronze statues. Archeologists who examined the pieces and other evidence reliably dated the shipwreck at around 65 BCE (give or take 15 years). But one of the archeologists noticed that a clump of bronze contained what appeared to be gears—an astonishing discovery, since that would make it the world’s oldest surviving geared mechanism. Further examination showed that the object was originally a wooden case holding about 32 bronze gears, with several dials on the outside. Over the centuries, the bronze had corroded, the wood had deteriorated, and the whole mass had accumulated heavy calcium deposits. But some inscriptions on bronze plates were still legible, and researchers began the painstaking task of reconstructing what the device must have looked like when it was made.

The first thorough description of the device—based solely on visual inspection and measurements—was published in 1959. Later evaluations included crucial additional details from X-ray and gamma-ray analysis, among other techniques. And eventually, in 2008, researchers were able to build a complete, working replica of the device. It turned out to be a clockwork-like mechanism designed to display the progress and positions of the sun, moon, and all five of the other planets known at the time (Mercury, Venus, Mars, Jupiter, and Saturn) over a period of 19 years, along with solar and lunar eclipses and the years of the Olympic games. In other words: it’s an analog astronomical computer. It had apparently been built several years before the shipwreck—most likely in 87–82 BCE, though some believe it could be as old as 205 BCE.

It’s All About Us

That’s cool, but it gets even better. At the time the Antikythera mechanism was built, the Greeks still believed the entire universe revolved around the Earth. This caused tremendous problems for predicting the orbits of the planets, which from our perspective do not follow nice elliptical paths. So in order to make this mechanism account for the data, its designer had to invent entirely new arrangements of gears. One of these was the differential (a primitive version of what is found in modern cars)—which, until the discovery of the Antikythera mechanism, was believed to have been invented in the 13th century. As for the overall device, nothing similar is known to have existed until about 1000 CE.

One reason historians find all this so interesting is that previously (in the absence of any reliable evidence to the contrary), the ancient Greeks were believed to have terrific theoretical knowledge when it came to astronomy, physics, and math, but little skill in the way of practical application. Sure, there were occasional remarks about an actual device. Cicero, for example, mentioned (at about the time the Antikythera mechanism was created) a device “recently constructed by our friend Poseidonius, which at each revolution reproduces the same motions of the sun, the moon and the five planets.” But since there was no evidence of these devices, few people took such claims literally. The discovery of the Antikythera mechanism changed all that.

We do not know for certain who created the device. The biggest mystery surrounding the Antikythera Mechanism, though, is why and how all records of this technology disappeared. Surely this could not have been the only such device ever created. If technology this important was in use at the time, it stands to reason that there would have been many other similar devices in existence, and that some of those would have survived to this day. But not only is this the only one, it’s a fluke that we even know about this one at all. What other ancient technologies may have existed that we don’t know about? The answers are probably lying out there—right where you’d least expect them.

Note: This is an updated version of an article that originally appeared on Interesting Thing of the Day on April 28, 2005.