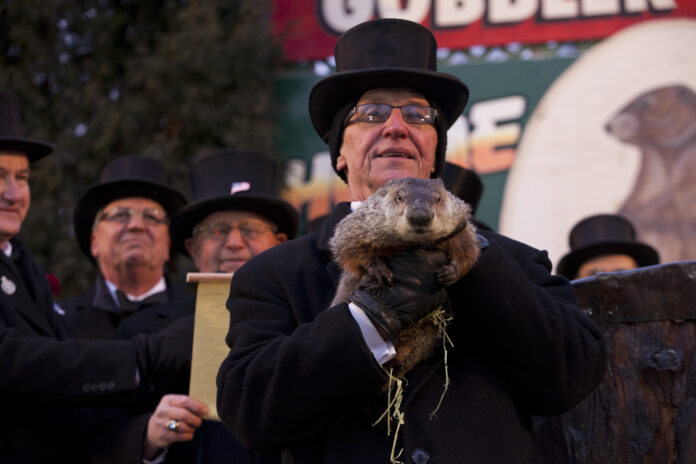 On February 2 of each year, everyone in the United States (and in numerous other countries) who reads, listens to, or watches the news is guaranteed to encounter at least one story about Groundhog Day. The stories will be exactly the same as the ones from last year, the year before, and every year for more than half a century. At around 7:30 A.M., Punxsutawney Phil emerges reluctantly from his comfy quarters in a small Pennsylvania town and, with a crowd of tens of thousands watching, either sees his shadow or doesn’t. The crowd, now informed as to whether or not they must endure six more weeks of winter, celebrates for a few hours and heads home.

The news stories repeat, for the umpteenth time, that this ritual has been going on since 1887, though it has been a public event only since 1966. They often point out that the rodent called “groundhog” (Marmota monax) is a type of marmot also known as the woodchuck or whistle pig. They also, without fail, mention the 1993 romantic comedy staring Bill Murray and Andie MacDowell in which Murray’s character gets stuck in a bizarre time loop that forces him to relive Groundhog Day thousands of times in a row. The stories may even reiterate the obviously false official proclamations that there has only ever been one Punxsutawney Phil all these years (despite the fact that a groundhog’s average lifespan is only about 10 years in captivity and half that in the wild); that the predictions are not rigged in advance; and that Phil is always correct.

Profit from the Prophet

I’d like to tell you how interesting I think this all is, but here at Interesting Thing of the Day we have higher standards. Let’s face it: this story has gotten kind of old. If this odd ritual occurred less frequently—say, every seven years—then perhaps it would be more interesting. If that which is predicted were of greater moment—say, a nationwide famine or bumper crop—that would be much more interesting. And, of course, if there were some ineffable scientific or metaphysical principle on display—say, a genuine 100% accuracy rate—that would be very, very interesting indeed. None of these things, alas, is true. This silly event is just for fun, and few people bother to pretend otherwise. After perusing dozens of websites, though, I was able to piece together a single factoid that makes me go “Hmmmm”—but it will require some explanation. The factoid is this: Phil’s predictions are statistically significant—the odds that they’ll be wrong are far greater than would be the case if they were completely random. In other words, bet against Phil every year, and over the long run you’ll turn a tidy profit.

As you may have guessed, it’s not quite that simple. The legend gives us two options: the groundhog sees his shadow, in which case winter will last another six weeks; or the groundhog does not see his shadow, in which case spring will arrive soon. Clearly, there are other possibilities. Winter may last for another five weeks, or four, or seven. The temperature may rise for a week but then fall again. Or it may hover in that ill-defined gray zone between “winter-like” and “spring-like” for weeks on end. How exactly does one determine definitively whether, or when, “winter” has ended (apart from looking at a calendar)? And supposing we work that out, how do we judge the results? If Phil predicts six more weeks of winter and there are five, was he right or wrong? What if he does not see a shadow but spring does not arrive in full force until three weeks later? Obviously, this indeterminacy enables groundhog fans to spin the facts in any way that pleases them.

Nevertheless, numerous news organizations, in a heroic attempt to create novel content about this ritual, have applied a variety of logical and meteorological standards in order to tease meaningful statistics out of the past century-plus of prognostications. The results—depending on how and when the calculations were performed—show that Phil has been right, on average, between 25% and 45% of the time. (For example, a recent review of the data just since 1988 gave Phil a 45% hit rate, whereas another one from a few years back pegged it at 40% and a journal article from 2001 estimated only 28% accuracy.) That, if you ask me, is a truly extraordinary negative correlation. Considering it’s the weather we’re talking about, I’d take those odds.

The myth of Groundhog Day is rooted in old Scottish and English rhymes involving Candlemas Day, which falls halfway between the winter solstice and the vernal equinox. According to the Continental tradition that gave rise to these rhymes, if the weather is cold and clear on this day, the cold will last; if it’s cloudy, the weather will soon turn. Groundhogs looking for their shadows are nothing but a convenient, folktale-friendly proxy. Supposing this story is somehow based in fact, it clearly must be a climate-specific fact. What may have been true centuries ago in Scotland, for example, may be all but meaningless in central Pennsylvania today. As a matter of fact, the very opposite appears to be much closer to the truth.

But then, from what I can tell, the presence, absence, or clarity of an actual shadow is sort of a moot point on Gobbler’s Knob in Punxsutawney on February 2. Phil provides his prediction in “Groundhogese”; the guy in the black top hat renders the official “translation.” Nearly always, the verdict is yes: there was a shadow; six more weeks of winter. Giving Phil and his handlers the benefit of the doubt here, and supposing complete shadow-reporting integrity, we might guess that Phil’s startling inaccuracy is a simple matter of geography. Some of Phil’s counterparts, after all, such as Chester in St. Louis and New York’s Staten Island Chuck, boast accuracy rates of up to 85%. But there may be a more insidious explanation. I think Phil really does know the score but purposely lies, in protest for being dragged out of bed and into the cold. Either that or some human speaks very poor Groundhogese.

Note: This is an updated version of an article that originally appeared on Interesting Thing of the Day on February 2, 2005.