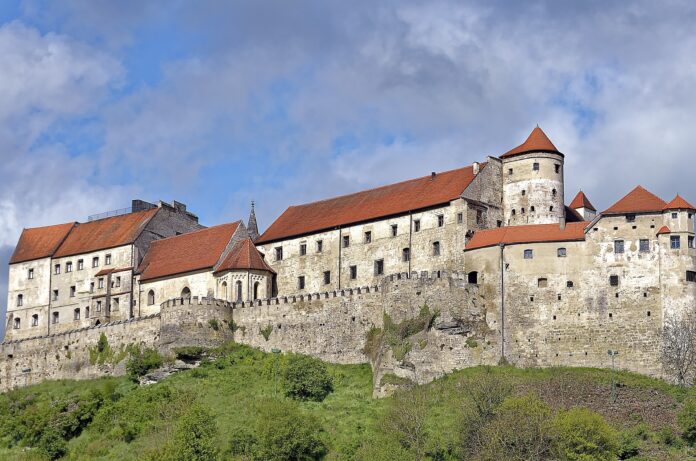 On my first visit to the Louvre, I was astounded by the amount of stuff there was to see—everything from da Vinci to Dührer to ancient Egyptian papyri. The collection is simply huge—the museum displays around 29,000 works of art in its endless halls. If you were able to stand in front of every object in the museum for only twenty seconds it would still take a full week, day and night. Not surprisingly, the “container” for all this stuff—the former Louvre palace—is gigantic as well. From its origin as a fortress during the reign of Philippe Auguste in 1190, to its present state today, successive governments and royal regimes have modified and beautified and expanded it along the length of the Seine into what it is now: a very large frame for the Mona Lisa.

After walking what seemed like miles past more Madonnas and children than I ever hoped to see, I had to keep reminding myself that there is a castle in Europe that is even longer than the Louvre. At age 16, I visited this castle while I was at a summer language camp in Bavaria. On one of our field trips, we went to Burghausen castle, 68 miles (110km) east of Munich, and 31 miles (50km) north of Salzburg. At the time, being a naive North American kid, castles and centuries-old European culture were still a novelty, and Burghausen made a huge impression on me. Heavy rain could not dampen my delight in visiting this imposing fortress, even though for my European friends it was just another castle. I was particularly wowed by its history, its size, and the fact that Napoleon had once stayed there.

The Long and the Short

Burghausen may not have the high profile of the Louvre, or even of other Bavarian castles (Neuschwanstein springs to mind), but it does have a long and complex history. It was built on a ridge overlooking the Salzach river, in an area that was once the site of a Celtic settlement (around 100 BCE), and was then occupied by the Romans before becoming a power center for various Bavarian aristocratic dynasties. The longest-lived of these dynasties, the Dukes of the Wittelsbach family, ruled Bavaria from 1180 until 1918 CE. During their reign, the castle was built up in stages (as was the Louvre), beginning in 1255 and continuing until around 1480–1490. In its finished state, the castle had six linked courtyards, and ran for over a kilometer along the ridge, making it the longest castle in the world.

In more recent history, Napoleon made use of Burghausen’s strategic position on the banks of the Salzach during his campaign against the Austro-Hungarian Empire. From April 28 to May 2, 1809, the one-time Emperor of France quartered his 100,000 troops and their horses in the area while a pontoon bridge was built to replace the one destroyed by the Austrian troops across the river. Despite the inconvenience of having tens of thousands of soldiers hanging around the town, this visit put Burghausen on the map for a time, and its local newspaper proudly declared: “We are the center of Europe: Napoleon stayed inside our walls.”

Besides its fascinating history, Burghausen is a wonderful place to visit for its modern incarnation as well. The Altstadt (“old town”) at the base of the fortress is extremely charming, filled with colorful row houses along the river, and narrow pedestrian-only streets replete with cozy shops. Every March the town hosts International Jazz Week, featuring world-class jazz musicians, and in July it celebrates a festival recreating 16th century life in the town and castle.

Another interesting aspect of Burghausen is its location right on the border with Austria. When I visited, I found it fascinating that I could to travel to another country by simply walking across a bridge from the town center over the Salzach river into Austria. It was a much shorter walk than a stroll through even one of the galleries of the Louvre.

Note: This is an updated version of an article that originally appeared on Interesting Thing of the Day on June 21, 2003, and again in a slightly revised form on November 6, 2004.