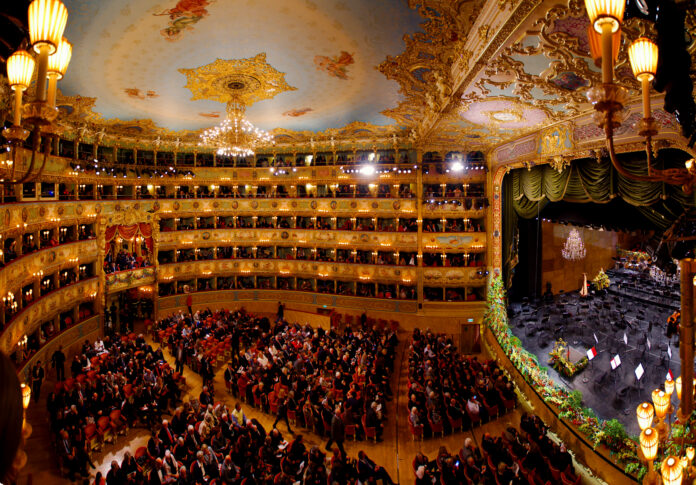 Throughout the night of January 29, 1996, a fire raged in the center of Venice, Italy, and by morning it had consumed its victim: the Teatro La Fenice, often called simply La Fenice. Luckily, the fire did not travel beyond the walls of La Fenice, but the destruction was profound. One of the great opera houses of Europe was gutted, and the city of Venice lost a treasured civic landmark.

Arriving by chance in Venice just days after the fire, celebrated author John Berendt set out to document the aftermath of the Fenice fire, interviewing local residents and city officials to find out what led up to the fire, and what long-term effect it might have on the city. As with his previous bestseller, Midnight in the Garden of Good and Evil, which centered around a lurid murder in Savannah, Georgia, Berendt found many colorful characters and community intrigues in Venice to write about in addition to his main story. The result of Berendt’s research is the 2005 book The City of Falling Angels.

The fire of 1996 that Berendt details in The City of Falling Angels is a riveting event, a tragedy on a huge scale. But for the Teatro La Fenice, this catastrophe was yet one more chapter in its long and strange history.

Fire in the Hall

Translated from Italian, La Fenice means “the phoenix,” a reference to the mythological creature that is reborn from its ashes after it is destroyed. Long before the fire in 1996, La Fenice acquired this name because of another fire, one that burned down the Teatro San Benedetto in 1774. In response to the loss of the theater, a group of ex-proprietors of the San Benedetto, calling themselves the Noble Association of Boxholders, decided to sponsor the creation of a new theater, and invited proposals for its design. Completed in 1792, La Fenice was well received and greatly admired by the public and the media.

Only a few years after the Fenice was completed, in 1797, the French army, under Napoleon’s command, invaded and occupied Venice, placing it under both French and Austrian control. Although ownership was retained by those who had built the theater, it in effect became a state theater. In accordance with this, in 1807, La Fenice played host to the now-Emperor Napoleon; a special loggia was built to accommodate him, and the theater was decorated in the imperial colors of blue and silver.

Further changes to the theater were made in 1828, including the hanging of a new chandelier and additions of painting and sculpture. All this work put into the Fenice was destroyed on December 13, 1836, when the theater caught fire, reputedly sparked by a newly installed Austrian stove. The fire burned for three days and nights, and continued to smolder for another 15 days. On the heels of this disaster, reconstruction began quite quickly, under the direction of the Meduna brothers, Tommaso and Giambattista.

Disorder of the Phoenix

After the major rebuilding of 1836, other refinements and renovations were made to the Fenice, most notably in 1854 and 1937. At the time of the 1996 fire, major restoration work was again being carried out on the Fenice, and according to The City of Falling Angels, many believed the chaos that existed inside the theater during this time contributed to its destruction. Indeed, the prosecutor charged with going after those responsible for the fire, Felice Casson, first focused on the city officials he felt were negligent in keeping order on the project. Examples of this negligence included the lack of restrictions on access to the site and the presence of equipment and flammable materials left scattered around the site by work crews. Most critically, response to the fire was hampered by the lack of water in the adjacent canal, drained as part of a canal improvement plan; valuable time was lost in routing water from another canal to the scene of the fire.

Eventually, however, Casson charged two cousins—the owner and employee of a company hired to carry out electrical work on the Fenice—with arson, and both were found guilty of the crime. The motive for arson given by the prosecution was that the men were trying to avoid serious fines the company would have faced if it did not meet an upcoming work deadline.

Out of the Ashes

The mayor of Venice at the time of the fire, Massimo Cacciari, promised that the Fenice would be rebuilt “com’era, dov’era,” or “as it was, where it was.” This was easier said than done, considering the difficulties of construction work in the middle of a city without roads. All the building materials had to be brought in by boat, and a large platform was built in the main thoroughfare of Venice, the Grand Canal, upon which cement mixers and large equipment were stored. After stops and starts, and after the project had changed management mid-stream, the new Fenice hosted its inaugural performance on December 14, 2003.

It was one more chapter in the history of this world-famous opera house, the setting for premieres of works by Verdi, Bellini, Stravinsky, and Britten, and the scene of many notable performances by opera superstars such as Maria Callas and Joan Sutherland. Like a phoenix, La Fenice twice rose from the ashes to continue its important role in the life of Venice.

Note: This is an updated version of an article that originally appeared on Interesting Thing of the Day on October 2, 2006.