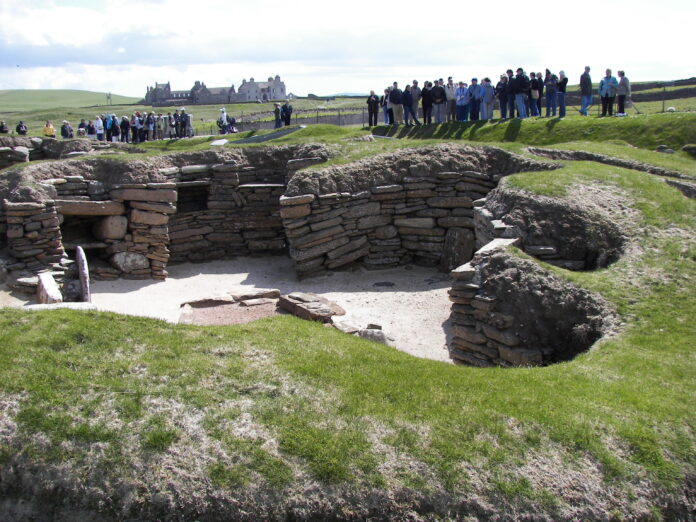 The 2001 documentary Rivers and Tides showcases artist Andy Goldsworthy, who creates ephemeral works of art out of the natural materials around him. Whether it’s leaves, twigs, or icicles, Goldsworthy crafts them into breathtaking constructions that add to the beauty of the landscape while still remaining part of it. Although Goldsworthy invests significant effort in each work, after its completion he leaves it at the mercy of the natural processes of wind, rain, sun, and water, only taking a photo to document its momentary perfection.

Some of Goldsworthy’s most arresting works are the ones he creates out of stone. The film follows the progress of a few such projects, including one in which he creates an egg-shaped structure out of split pieces of stone, and another where he works with stonemasons to create a long serpentine wall in a park in New York state. While the wall is meant to be a permanent installment, the egg-shaped structure Goldsworthy creates in the film is destined to be carried away by the rising tide, showing the vulnerability of a material that most people would take to be among the most solid.

Although originally from England, Goldsworthy has lived for many years in southwestern Scotland, finding inspiration for his work in the local landscape. At the other end of the country, in the Orkney Islands off the north coast of Scotland, once lived a people who similarly worked in stone, but whose work has lasted over 5,000 years. Miraculously protected from the elements for millennia, the settlement of Skara Brae is Europe’s best-preserved Neolithic village.

The ancient settlement of Skara Brae is currently located on the edge of the Bay of Skaill, on the west coast of the largest Orkney island (called the “Mainland”), but at the time of its construction (thought to be around 3100 BCE) it was situated far inland. Over thousands of years extreme erosion brought the coast to Skara Brae’s doorstep, and also created sand dunes that covered it and kept it hidden until relatively recently. In 1850, a severe storm removed some of the grass covering the mound of sand, revealing the existence of Skara Brae to the modern world for the first time. Some excavation work was done on the site at that time, but it was left untouched after 1868.

In 1928 an excavation of the site showed the full extent of the discovery. Skara Brae had remained remarkably intact, providing an incredible glimpse into the daily lives of its ancient inhabitants. Besides the protection of the covering sand, the fact that a lack of wood in the area had forced its builders to use stone instead contributed to Skara Brae’s longevity. Most other Neolithic structures, created out of wood, have not fared as well.

One of the fascinating aspects of Skara Brae is how it was constructed. To shield themselves from the cold, and to provide a stable foundation, the inhabitants of Skara Brae built their homes into a mound of midden, that is, the waste products of their community. While this may seem distasteful, their garbage was most likely similar to modern compost, made up of completely organic materials. Stones were laid on top of this foundation, creating an insulated and weather-resistant structure.

The settlement consists of eight houses connected by covered alleys, which allowed the inhabitants to remain inside during cold weather. Another notable aspect of Skara Brae is that seven of these houses are strikingly similar, with features common to all of them including a central hearth, two stone box beds (meant to be filled with heather), a dresser/shelf, and a waterproof enclosure built into the floor which might have held fish for bait or for eating.

Because it gives such a clear picture of what life was like for its ancient residents, Skara Brae has become world-renowned, and is part of the “Heart of Neolithic Orkney” UNESCO World Heritage site. While Skara Brae is being maintained and protected as much as is possible, ironically it is now threatened by the wind and water that once helped to preserve it, because of its proximity to Skaill Bay and the fact that it is exposed to the elements. It may have withstood the ravages of time for the last 5,000 years, but like the ephemeral stone sculptures of Andy Goldsworthy, it remains vulnerable to change and the destructive power of nature.

Note: This is an updated version of an article that originally appeared on Interesting Thing of the Day on November 20, 2006.