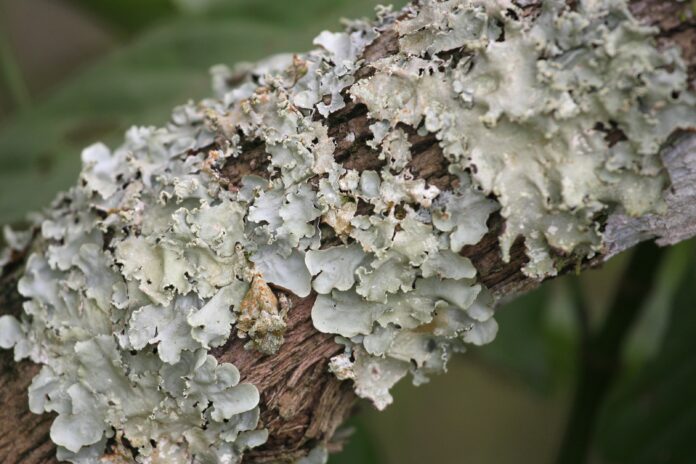 There are some things in the natural world I tend to take for granted, but that reveal true surprises when I look at them more closely. Such is the case with lichens. I’ve known about lichens since childhood, but it turns out I never really knew anything about them at all. I always assumed they were like mosses, vegetable-like things that grew on the ground, rocks, and trees. In fact, lichens are not even one organism; they are a delicate balance of fungi and algae (and in some cases, cyanobacteria) that coexist in the form of what we see as a lichen growth.

More than this astonishing fact, a study of lichens reveals many other surprises, including examples of their extreme hardiness, the myriad of uses to which they are often put, and the fascination they once inspired in a beloved literary figure. I’ve learned that there is much more to lichens than meets the eye.

One is the Hungriest Number

On the most basic level, lichens exist to fill a need for certain types of fungus. Because fungi are unable to produce food for themselves, they have adapted to take advantage of whatever opportunities they find to gather it, either becoming parasites on other organisms or gaining nutrients from decomposing matter. In the case of lichens, fungi use the photosynthesis abilities of algae and/or cyanobacteria to access nourishment. The fungus makes up most of the bulk of a lichen, with the algae or cyanobacteria cells interspersed amongst so-called “fungal filaments.” Because these cells contain chlorophyll, they are able to convert water and carbon dioxide into fuel for the lichen. In return, the fungus acts as a protective covering for the algae and cyanobacteria. In this way, the two (or more) organisms have a symbiotic relationship.

Various sources estimate that lichens cover 6–8% of the world’s land, and can be found pretty much everywhere there is a stable surface and adequate sunlight. They often grow on surfaces that other organisms would find inhospitable, such as desert sand, bare rock, and arctic tundra. Their four basic forms are: crustose (flat, scaly growths); squamulose (pebble-like growths); foliose (resembling leaves); and fructicose (tube-like branches). Lichens grow extremely slowly, sometimes less than one millimeter per year, and for this reason are helpful to scientists trying to date glacial retreats and other disturbances in the geological record.

Lichens serve as a major food source for many types of animals, including deer, caribou, and reindeer (hence the lichen that’s misleadingly called “reindeer moss”). In addition, some bird and squirrel species use lichens not only as material for building their nests and burrows, but also as food (handy in the winter when nothing else is available). Lichens have sometimes been eaten or brewed as tea in some cultures, but the use of lichens for their decorative and medicinal purposes has been much more common in human history. Their unique usefulness is a result of their adaptive abilities; in response to environmental challenges or to deter predators, lichens of different kinds have created more than 500 biochemical compounds. Dyes made from lichens were once commonly used in coloring textiles and continue to be used for preparing litmus paper. Some lichens have been found to have antibiotic properties, and are used as medicinal remedies in various parts of the world. Since they can be extremely sensitive to environmental conditions, lichens have even been used to detect levels of air pollution in Europe and North America.

An interesting footnote in the story is the involvement of the famous children’s author and illustrator Beatrix Potter in the early study of lichens. Best known for beloved works such as Peter Rabbit and The Tale of Two Bad Mice, earlier on in her career Potter was commissioned to create scientific drawings of biological specimens, including fungi and lichens. She became so interested in these organisms that she wrote her own scientific treatises on them, and in fact was one of the first to propose that lichens function as a symbiosis between fungi and algae cells. While she enjoyed her study of lichens, the success of her literary works eventually overshadowed this pursuit.

Out of all the interesting facts about lichens, I think the most impressive is their extreme hardiness in harsh conditions. For example, lichens can dry out entirely, but then be restored to their original condition once they take on water again. This ability has served them well in regions where water can be scarce, such as deserts and polar regions.

Putting lichens to the ultimate test, the European Space Agency ran an experiment in 2005 that was mind-boggling in its implications. Researchers directly exposed specimens of two different species of lichen to open space for 14.6 days before returning them to Earth (the lichens were shielded during re-entry). Despite their exposure to the vacuum of space, cosmic radiation, full-spectrum UV light, and intense temperatures, the lichens survived and were able to undergo photosynthesis as before. Further experiments on the International Space Station have tested the endurance of lichen, including exposing it to space conditions for a year and a half. A team of scientists in Crete has also explored how lichens would fare in the environment of Mars, leading them to believe that lichens’ ability to survive the harsh climate, coupled with their hydrogen-producing capability, could make them a valuable source of fuel for long-range space exploration.

Lichens truly are amazing; with their incredible adaptive abilities, they have managed to thrive in the most barren of settings on Earth, and can even endure the severe conditions of outer space. The unique partnership of fungus with algae (or cyanobacteria) has benefited both organisms; in the case of lichens, two really is better than one.

Note: This is an updated version of an article that originally appeared on Interesting Thing of the Day on April 30 2007.