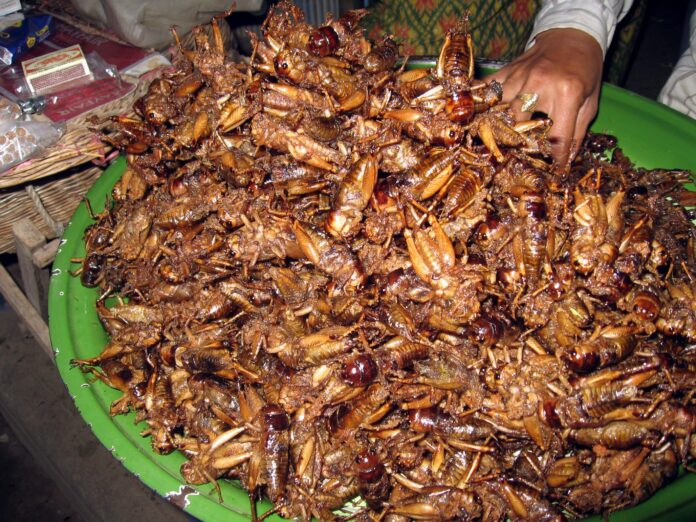 Having lived the majority of my life in the northern latitudes, I have rarely had to deal with the everyday aspects of life in a tropical climate. Despite this fact, on those occasions when I have visited countries to the south, I have been able to endure the usual tropical conditions, chiefly high heat and humidity, without too much difficulty. However, there is one aspect of tropical life I find particularly hard to handle: coming face to face with insects of gigantic proportions.

While there are insects I find annoying in my part of the world (such as mosquitoes and ants), their relatively small size makes them seem less threatening than their tropical cousins. I realize that many people are used to seeing such creatures every day and and therefore don’t find them unnerving. However, this knowledge didn’t help me much when I was Indonesia, and we found two enormous water bugs hiding out in the mosquito netting above our bed. After some comically desperate maneuvers, we finally succeeded in banishing the bugs from the room. Perhaps if we had known that water bugs make a tasty condiment (ground up with chilies to make a spicy Thai paste), we might have welcomed them instead.

A Plate of Locusts

Although in Western cultures there is a general aversion to being around insects, let alone eating them, in many parts of the world (and also increasingly in the West) the insect kingdom is seen as an important and coveted source of food. The practice of eating bugs as food is known as entomophagy, and has been part of the human experience throughout history.

There is evidence that ancient cultures in Mexico, Spain, China, and what is now the United States included insects in their diets. The biblical book of Leviticus mentions locusts, bald locusts, beetles, and grasshoppers as acceptable food for the Israelites, and in the book of Matthew, John the Baptist is said to have subsisted on locusts and wild honey. The ancient Romans also reputedly practiced entomophagy, consuming locusts, cicadas, and stag beetle larvae at their lavish feasts.

Today, insect-eating is popular in parts of Africa, Australia, Central and South America, and Asia, including Thailand, Indonesia, China, and Japan. In some places, such as among Aboriginal peoples in Australia, insects are part of the traditional diet, being a readily available source of protein. In other places, insects are considered delicacies, and are prepared in numerous ways meant to tempt the palate—including roasting, frying, and grilling. In Colombia, for example, Hormigas culonas, or fried giant ants, are a regional specialty. Hachi-no-ko, or boiled wasp larvae, can be found in some restaurants in Japan, along with fried cicadas (Semi), rice-field grasshoppers (Inago), and silk moth pupae (Sangi).

It’s now possible to obtain edible insects prepared in lots of ways from online vendors, including candied insects, savory canned insects, and even insect alcohol infusions. A quick search of “edible insects” on Amazon currently brings up nearly 400 results of products an aspiring entomophage could sink their teeth into.

How to Eat Fried Crickets

Despite Western societal taboos against human consumption of insects, a growing number of enthusiasts believe there are economic, environmental, and health benefits to the practice of entomophagy. They argue that it is cheaper and more efficient to raise insects as a protein source than it is to rely on other animal products, and that it is less damaging to the environment. In addition, they claim that insects provide more nutritive value, while being lower in fat than other types of protein.

These benefits make entomophagy seem like the answer to some pressing problems, but there are a few barriers to it becoming more socially acceptable. Besides the obvious reluctance to eat creatures that many people find repulsive, there is debate about what effect the large-scale practice of entomophagy might have on the environment, with some voicing concern that certain species could be eradicated entirely. Also, some people have adverse reactions to eating insects, whether from allergies or pesticide contamination, making it necessary to educate the public about these dangers.

Despite these issues, as a former vegetarian I understand and applaud people’s efforts to eat lower on the food chain, for both health and environmental reasons. However, I don’t think I’d ever be able to switch to a bug-eating lifestyle, no matter how tasty or nutritious they might be. I’ll leave that to those with more adventurous palates and stronger stomachs.

Note: This is an updated version of an article that originally appeared on Interesting Thing of the Day on February 21, 2007.