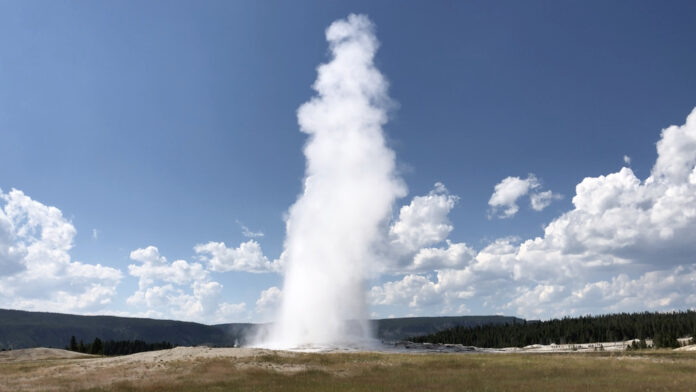 Last summer my family and I took a vacation that included a visit to Yellowstone National Park, famous for its wildlife and extensive hydrothermal features. We ogled the stunningly beautiful Grand Prismatic Spring, walked past smelly mud pots, and delighted in the gorgeous formations of the Mammoth Hot Springs. But the highlight of the visit was the chance to get close to some of the incredible geysers that Yellowstone is known for, including Steamboat Geyser (the world’s tallest active geyser) and the relatively punctual Old Faithful.

Geysers are quite unique among geological formations, the product of extremely rare circumstances. For a geyser to become active and stable, four conditions must be met. The first thing required is a geothermal heat source, most often provided by underground volcanic activity. Second, there must be a reservoir of water available. Third, a geyser requires a certain kind of rock, most often silica-rich rocks such as rhyolite or ignimbrite. This type of rock, when exposed to water, can develop the pressure- and water-tight seal that is necessary for the proper functioning of a geyser. The fourth requirement is a constriction in the geyser formation near the surface, which allows pressure to build up below it until the geyser erupts.

When only some of these conditions are met, other phenomena occur, such as hot springs (heat, water, and rock, but no constriction), fumaroles (steam vents that do not have enough water to erupt), and mud pots (fumaroles that emerge into a wet environment, creating mud at the surface). However, if all the necessary conditions occur simultaneously, a geyser may form and remain active over long periods of time.

The life cycle of a geyser begins when water seeps into the ground from the surface (because of rain) or from underground reservoirs, eventually sinking deep enough to reach a layer of hot rock. This water is slowly heated and gathers at the bottom of the geyser channel, while colder water enters the channel from above, and sits on top of the warmer water. The pressure of the cold water prevents the warm water from boiling, although it continues to become super-heated. When the pressure becomes too great, the hot water turns to steam and pushes the colder water out of the channel. This reduces the pressure further, producing even more steam. This whole cycle can take 500 years, which means the water rushing from a geyser today may have fallen as rain during the 16th century.

Old Faithful is one of the most famous geysers in the world, getting its name from its consistent schedule; it erupts on average every 91 minutes. Every geyser has its own schedule, based on its unique conditions, but this schedule is not set in stone (as it were) because geysers, including Old Faithful, are vulnerable to changes in the environment that may affect their activity. Even slight changes to the water supply or the rock formation can adversely affect the fragile balance of a geyser. Some are caused by natural processes, such as volcanic activity, but increasingly, geysers are threatened by human interference.

It is estimated that there are only 1,000 geysers in the world, half of which exist in the geyser-perfect environment of Yellowstone. Other countries with large numbers of geysers concentrated in a single area are Iceland, Russia, Chile, and New Zealand, and individual geysers exist in Peru, Bolivia, Mexico, Dominica, the Azores, Kenya, and Japan. One of the greatest threats to geysers is the diversion of their underground water sources, most often in connection with the creation of geothermal power plants. Such is the case in New Zealand, where the Wairakei geyser field on its North Island was devastated by the creation of a nearby power plant in 1958.

Of course, geysers can become dormant for many reasons, and their fragility is part of their rarity; it takes a lot to create a geyser, and just as much to keep it going. They are truly scientific marvels, and worthy of being protected as much as possible, not only for their entertainment value, but for what they tell us about long-term geological processes. Although it’s thrilling to stand next to Old Faithful while it erupts, it’s even more thrilling to imagine that this spectacle has been 500 years in the making.

Note: This is an updated version of an article that originally appeared on Interesting Thing of the Day on November 29, 2006.