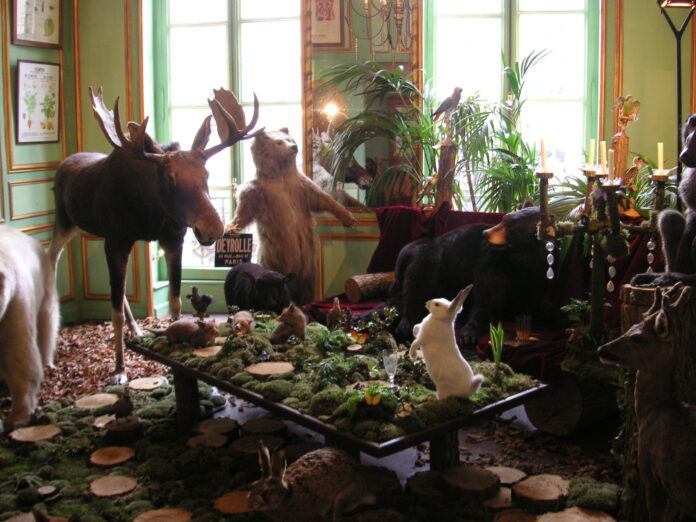 On a trip to Paris in 2003, a large number of transit and public utility workers were on strike. Strikes of this kind are extremely common in France; a week when no one is on strike would be considered strange. In any case, a lot of people weren’t showing up for work, either because the subways weren’t running or because they were participating in demonstrations on the streets. As a result, museums and other attractions were forced to scale back their hours of operation. After leaving the Musée d’Orsay early, we had some time to kill on the left bank, and we took the opportunity to look up a nearby shop Morgen had read about.

In Paris to the Moon, Adam Gopnik describes the five years he spent living as an expatriate in Paris along with his wife and young son. (Hey! I did that too!) One of their favorite places to go on rainy days was a strange and fascinating shop called Deyrolle on the Rue du Bac. Deyrolle could be described as a taxidermy shop, but that doesn’t begin to do it justice, and besides, taxidermy shops are not exactly a dime a dozen—especially in Paris.

When we arrived at Deyrolle, we couldn’t determine if it was even open for business. At street level, there were large glass display cases on either side of the door; beyond that, a dark foyer. There was no sign saying “Ouvert,” no lights on, no people, no signs of life. In fact that last point should have been the tip-off that everything was normal. We tried the door; it opened. There was a creaky old staircase ahead of us, and we tentatively mounted the stairs. When we got to the top we were greeted by the reassuring glow of fluorescent lights, and the somewhat less reassuring sight of a moose staring at us.

I had always thought of taxidermy as a craft marketed rather narrowly to hunters wishing to display their prized trophies. At Deyrolle, no animal is too exotic, or too ordinary, to be stuffed. You’ll walk past lions, tigers, zebras, and a giraffe, not to mention a polar bear, a hyena, a badger, and a baboon. But you’ll also find every imaginable barnyard animal, as well as birds, deer, rabbits, and so on. The animals are scattered throughout the store as though they were customers, and they are for the most part extremely lifelike, sometimes eerily so. Some of the more exotic animals are for display only, but most are available for sale or for rent. That’s right: you can rent a dead zebra, elephant, or bear for your next party.

Take This Pet and Stuff It

The shop was founded in 1831 by Emile Deyrolle, and it moved to its current location—the former home of Louis XIV’s banker—in 1881. It is now owned by a company called Le Prince Jardinier that runs a number of specialty household goods stores. Most of the people who walk into Deyrolle are there mainly to browse, though the store does a fairly brisk business in mounted butterflies, beetles, and other insects, as well as rocks, fossils, and a variety of educational products. It is, however, a functioning taxidermy operation, and for a few hundred euros you can have your household pet stuffed when it expires. Deyrolle politely declines requests by humans to have their mortal remains stuffed and mounted; I heartily agree with the wisdom of this policy.

When we first visited Deyrolle, it looked as if it had changed little in the last hundred-plus years. Like its products, it seemed to be in a perpetually immobile yet lifelike state. But on February 1, 2008 (just months after we moved to Paris), a major fire tragically destroyed a significant portion of Deyrolle’s collection. With the help of numerous generous artists, the building and much of its contents were quickly restored, and the shop reopened in May of that year. It’s now a little bit…shiny for my tastes (you can see for yourself in a virtual tour on Deyrolle’s website), but still as weird and endearing as ever.

Current laws make it virtually impossible for a taxidermist to obtain the kinds of large, exotic animals that were once Deyrolle’s main trade (there are some exceptions, such as animals that died of old age at a zoo). That’s probably just as well; it’s a rather discomfiting notion given modern sensibilities about wildlife preservation. But the store is still well worth a visit for the sheer strangeness of it all.

Note: This is an updated version of an article that originally appeared on Interesting Thing of the Day on October 9, 2003, and again in a slightly revised form on September 28, 2004.