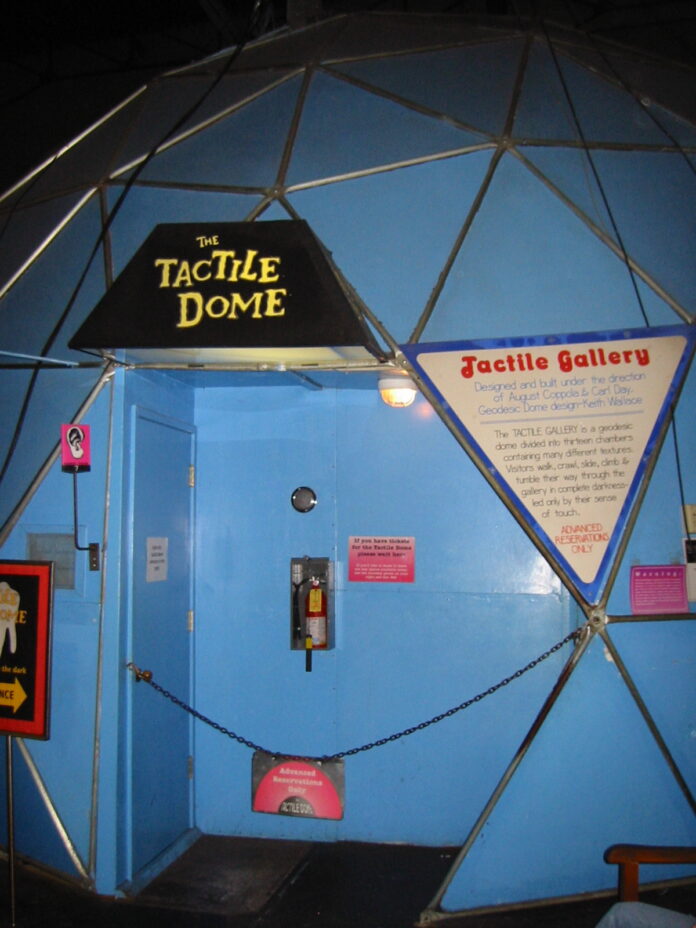 San Francisco’s Exploratorium is an immense (and immensely popular) hands-on science museum. Exhibits cover the usual range of subjects—electricity, physics, optics, biology, and so on—but with a degree of interactive friendliness that’s rare even in the best science museums (and I’ve seen quite a few). Almost everything is designed to be touched, played with, and experimented on—even by young children, whose destructive impulses know no bounds.

Although I visited the Exploratorium a number of times during the years I lived in San Francisco, there was one exhibit I’d never experienced but always been curious about: something called the Tactile Dome. This is an exhibit for which you must make an advance reservation (and pay extra), and I had never had the foresight to call ahead before visiting the museum to see if there was an open slot. But on one visit when a same-day opening came up, I immediately signed up—after listening to a short speech on all the medical and psychological conditions that would preclude a safe visit and consenting to the non-refundability of the ticket.

The Tactile Dome is a smallish geodesic dome within the museum whose stated purpose is to explore the sense of touch—taking the “hands-on” principle to its logical extreme. Inside the dome is a series of oddly shaped chambers lined with a variety of materials. The chambers are completely dark, so visitors must navigate through them—climbing, crawling, sliding, and squeezing—using only the sense of touch for guidance. In an anteroom the eight or so people who have reservations at a given time remove their shoes and any objects that might fall out of pockets and get lost. (They are quite strict about their “no-extraneous-stuff” policy; I wasn’t even allowed to take a ballpoint pen in with me, even though it was capped and sealed in a zippered pocket behind a Velcro flap. I thought that prohibition was a bit silly, but don’t say I didn’t warn you.) Then, in smaller groups (in my case, a group of one), you proceed into the dark chambers.

A complete trip through the dome takes anywhere from five to ten minutes, and guests are spaced far enough apart that they won’t run into each other. The inside of the dome is not a maze; every chamber has just one entrance and one exit. An attendant in the anteroom monitors your progress by listening to the sounds picked up by microphones positioned throughout the dome. If a visitor gets stuck or panicked, a verbal request for help is all that’s needed; every spot in the dome is immediately reachable by hidden access doors. The intercom (which the other visitors waiting in the anteroom can also hear) serves another purpose, too: to discourage, shall we say, extracurricular activities that the dark and solitary environment might suggest. Each group gets to go through the dome several times during their visit.

As I made my way through the dome, I found that even though sight was not available, it was not a purely tactile experience. Each time I entered a new chamber, I could tell something about its size and shape from the sounds I heard, along with the combination of temperature and airflow I could feel. Even smell played a part—the characteristic scents of carpet, wood, plastics, and the smelly socks of the person who crawled through the dome before me all contributed to a mental image. And that effect was a bit eerie—even though I couldn’t see anything, I had the distinct sensation of visual images of the rooms constructed from the other sensory data I was gathering. That impression alone made the experience worthwhile for me.

The Tactile Dome was designed by Dr. August F. Coppola (brother of director Francis Ford Coppola) in 1971, and rebuilt when the Exploratorium moved to Pier 15 in 2013. (Note that the photo above is from the early 2000s; the dome is now a more stylish black and has better signs, though the basic design is still the same.) By an interesting coincidence, the Tactile Dome is not the only dome-shaped, building-within-a-building attraction in San Francisco that was constructed in the 1970s and designed to be experienced in total darkness. Audium, located across town, shares all these attributes but was designed to explore the sense of hearing rather than touch. If there’s also a Smell-O-Dome lurking somewhere in the city, I’d just as soon not know.

Note: This is an updated version of an article that originally appeared on Interesting Thing of the Day on June 1, 2003, and again in a slightly revised form on July 5, 2004.