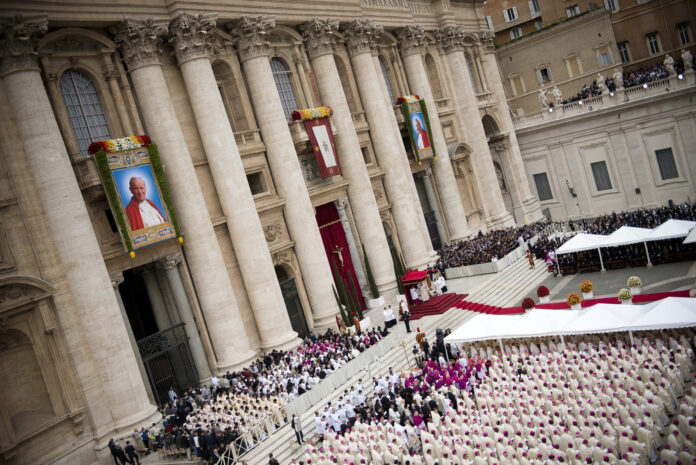 Douglas Adams, whose writings I have always admired greatly, was a self-proclaimed “radical atheist” who nevertheless liked to say that he was “fascinated by religion”—carefully pointing out that interest was different from belief. Although I would characterize my own views in somewhat different terms, I share his fascination with certain religious beliefs that I do not personally hold. One such notion is that of the saint, particularly as the term is used in Catholicism.

Borrowing an expression from the historical canonization process, allow me to play devil’s advocate for a moment. As an outsider, my impression of saints is that the Church considers them to be extra-holy (dead) people to whom God pays special attention, so that by praying to a saint instead of directly to God, you somehow stand a better chance of having your prayer answered. So they seem to function as heavenly lobbyists, and frankly, I would have thought that an omniscient God would frown on such tactics. Presuming, of course, that a departed soul can hear prayers at all, it is unclear to me why a saint would listen to me in the first place if God were disinclined to heed my prayer. And my mind boggles at why saints’ domains of intercession should be so specialized. (Did you know that Isidore of Seville is the patron saint of the internet? No kidding.)

These things puzzle and exercise me. At the same time, I find the whole subject of sainthood extremely interesting. In particular, I always wondered just how it was that someone came to be recognized as a saint, having picked up only bits and pieces of the process in books and movies. After doing a bit of research, I think I can give a very rough (and, I hope, approximately correct) outline of the path to sainthood. But before I describe the current process, I need to go back quite a few centuries to provide some background.

As I understand it, the word saint (from a Latin word meaning “holy”) was used in the New Testament simply to denote a righteous person (living or dead). During the early centuries of the Christian Church, the term was applied fairly freely to any number of people, and the practice of praying to particular saints after their death gradually became an accepted part of religious life. Eventually, bishops reserved the authority to decide who should be considered a saint, but such proclamations were considered valid only for that bishop’s local area. By the 10th century, the Church realized that very uneven standards were being applied, and that rather questionable characters were being called saints—even some who may never have existed. So the process was officially codified for the first time, with the pope assuming sole authority to proclaim someone a saint. Although this title was given to some who had been called “saints” before, many didn’t make the cut. (St. Christopher was among these. Although never canonized—formally declared a saint—his feast day continued to be listed on the official Church calendar until 1969.) The rules for canonization were refined and improved over a period of several centuries.

The original process was an enormously complex and lengthy one. Church investigators collected extensive evidence about the person’s life and death—including, especially, any writings the person left. But the crucial test was that of miracles. It was not necessary that a person had performed a miracle while living (though such events certainly helped the cause). Rather, evidence had to be found that after the person’s death, someone had prayed to them—and only to them—and that a miracle had subsequently occurred. The number and nature of required miracles varied according to the circumstances. Many of the earliest saints were martyrs—those who had not only led holy lives but who had demonstrably died for their faith. Martyrs were put on the fast track to sainthood, with less-strenuous requirements—including fewer (or in some cases, no) miracles.

When a certain amount of evidence had been collected, the person was beatified, at which point he or she could be referred to as “the Blessed So-and-So.” But before sainthood could be granted, proof of one or more additional miracles was required. In addition, the life of the saint-to-be was subjected to the utmost scrutiny, with an appointee of the Church (commonly known as the “devil’s advocate”) digging up and pointing out any potential flaw or shortcoming, no matter how small. If this person, who functioned very much like a prosecutor in a trial, was unable to prove his case “against” the beatified, sainthood could be granted.

You will notice, of course, that I speak of all this in the past tense. In 1983, Pope John Paul II simplified the process of canonization tremendously—and eliminated the position of “devil’s advocate.” Now, in general, beatification requires an unblemished biography—with ample indication of the individual’s devotion to the Church—plus one posthumous miracle. Canonization requires a second miracle. Although the process is not even supposed to begin until at least five years after a person’s death, the pope can waive that requirement at his discretion, as he did with Mother Teresa.

This business of proving that a saint was responsible for a miracle is particularly fascinating. The Church adopts a stance of skepticism toward all such claims, and has an entire staff of scientists and doctors who attempt to disprove the miracles—or to find alternative explanations. Most “miracles” are miraculous cures, and in such cases, the Church requires that a board of five doctors unanimously agree that no other explanation exists. Moreover, the cure must be complete and instantaneous; if the illness was cancer, a waiting period of 10 years is required to be sure the disease hasn’t merely gone into remission. Of course, proving that a particular saint was responsible for a miracle (having interceded with God on someone’s behalf) is not such a scientific undertaking. What if, for example, a neighbor prayed to another saint but didn’t tell anyone? What if—heaven forbid—the “miracle” occurred due to perfectly natural causes that simply escaped the scrutiny of the examiners? When all is said and done, no formal process, however detailed and rigorous, can completely eliminate the need for faith.

When all the tests have been passed, the pope proclaims, infallibly and irrevocably, that the person is a saint, and, in fact, always has been. The pope’s declaration does not, according to Catholic dogma, make someone a saint, it only acknowledges this fact officially. The faithful may honor and pray to a saint, but not worship a saint, as worship is to be reserved for God. Likewise, a saint does not actually perform a miracle but rather entreats God to do so. But in real life, these fine distinctions are sometimes lost, turning saints, for all practical purposes, into demigods.

Thanks to his newly streamlined process, Pope John Paul II declared nearly 500 people to be saints—many more than all his predecessors combined. Not to be outdone, Pope Francis has declared almost 900 people—including Pope John Paul II and Mother Teresa—to be saints as of early 2019. This seems rather excessive to me, but then, having any saints at all strikes me as an unnecessary complication in an already complex religion. I suppose the optimistic view is that this is a reflection of an ever-growing number of virtuous people in the world. But I can’t prove that; you’ll have to take it on faith.

Note: This is an updated version of an article that originally appeared on Interesting Thing of the Day on March 19, 2005.