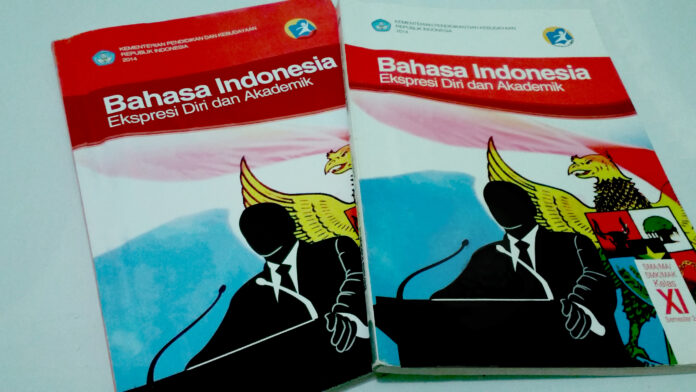 During college I spent a summer in Indonesia, and naturally I picked up a bit of the language. When I say “the language,” I’m referring to Indonesian or, as it is known in Indonesian, Bahasa Indonesia (“language of Indonesia”). This statement is not as obvious as it may sound; Indonesia is home to hundreds of languages, and of these, Indonesian is not spoken as a first language by the majority of the population. But it is the lingua franca, so it’s useful for citizens and travelers alike. I found Indonesian to be straightforward and easy to learn, free of most of the irregularities and annoyances of the Romance languages.

What I understood at the time was that Indonesian is, for the most part, the same language as Malay (Bahasa Melayu), the national language of neighboring Malaysia. I assumed that there were some differences, but that the main one was simply the name. I had no idea at that time of how either version of the language came into existence. It turns out that there’s a bit of a modern myth about the language’s origin—but the truth is even more interesting.

While doing some research on an unrelated topic, I stumbled upon a webpage claiming that Indonesian was an artificial language. I’d never heard that before and it piqued my interest, so I dug further. A few minutes of web searches turned up quotes such as the following (identities omitted to protect the guilty):

Bahasa Indonesia is an artificial language made official in 1928. By artificial I mean it was designed by academics rather than evolving naturally as most common languages have.

…Indonesian [is] a very simple Malay-based artificial language, designed by academics, and was the official language for a multiethnic country of over 230 million inhabitants.

…Indonesian is a constructed language made by a Dutch missionary in the 1920s on the basis of synthesizing some local languages.

…[Indonesian] was devised by a Dutch linguist, based on various Malayan and Indonesian varieties…in the 1920s.

The language in Malaysia, Bahasa Malay, is a constructed language, and was designed to be easy to learn, as the various people in Malaysia and Indonesia who were told to form rather large nations after WWII needed a common language.

…every language is artificial—it just depends how many people create it. Bahasa Indonesia is also invented but by a group.

Bahasa Indonesia is essentially a constructed language designed to fool foreigners into thinking Indonesia is a monoculture.

…the other major semi-artificial language of recent times, Bahasa Indonesia, the national language of Indonesia, is a syncretic amalgamation of existing Malay dialects that were still in current use.

Even though it is basically the Malay language, [Indonesian] has in common with Esperanto…the fact of having underwent [sic] a kind of planned restructuration to simplify grammar and reduce exceptions.

With all that evidence, I was nearly convinced, though I wasn’t entirely certain what I was convinced of. This string of claims sounded a bit like the telephone game, where a message changes just a bit with each retelling. Then a little voice in the back of my head whispered, “Primary sources, Grasshopper.” Every fact on the web appears to be equally authoritative, but just because somebody says something with conviction doesn’t mean it’s true. So I went to an actual library (two of them, in fact) and looked at ancient documents known as “books”—some more than fifty years old—to see if I could get to the bottom of this story. After all, if a Dutch linguist (or missionary) did in fact invent the language, I should be able to find that person’s name. And if a committee of academics invented it, I should be able to find some record of that momentous project.

Let me cut to the chase: as with all myths, this one has a kernel of truth to it. But the claim that Indonesian is an “artificial” or “constructed” language is simply false.

Indonesia is an archipelago consisting of over 18,000 islands, of which about a third are inhabited. That these islands—and their greatly varying cultures and languages—should be considered a single nation is a relatively recent (and, ethnographically speaking, artificial) notion. Nevertheless, for centuries, traders sailing from one island to another have needed to communicate with each other. Malay was the local language of Malacca, a port town near the southern tip of the Malaysian peninsula. According to legend, local fisherman in Malacca developed Malay as a synthesis of several nearby languages in the late 16th century. However, written records of Malay date back as far as the 7th century, so it is more likely that the fisherman simply integrated new words into the language. (Such borrowing happens in virtually all languages, and the newly incorporated words are known as “loan words.”) In any event, Malacca was a hot spot for traders, and by the time the Dutch colonized Indonesia (then known as the Dutch East Indies) in the 17th century, Malay had already come into widespread use as the regional trade language.

During their more than three centuries of occupation, the Dutch, unsurprisingly, attempted to enforce the use of their own language for trade. In the process, Malay—as spoken in Dutch territory—picked up a number of Dutch loan words, while the Malaysian speakers of Malay developed a somewhat different vocabulary. Meanwhile, due to the influence of Islam, which had been introduced in Indonesia as far back as the 13th century, Malay also picked up a number of Arabic loan words. Because parts of Indonesia were Hindu, Sanskrit also gave numerous words to Indonesian—including “bahasa” (“language”). And since Portugal traded in Indonesia and for many years controlled East Timor, many Portuguese words also found their way into the language. In short: without question, the Indonesian variety of Malay did indeed borrow heavily from numerous other languages, but this was a natural linguistic evolution. However, there’s still more to the story.

The Language of Change

By the 1920s, public sentiment in Indonesia was turning strongly toward gaining independence from the Netherlands. In October 1928, the Sumpah Pemuda (Pledge of the Youth) proclaimed that in Indonesia, Malay was to be called “Bahasa Indonesia” and considered the national language. However, there being no nation as yet, this was more of a rallying cry than anything else. In 1945, Indonesia declared its independence from the Netherlands and stated in its constitution that Bahasa Indonesia was its official language—though it took four years of fighting before the Dutch acknowledged Indonesia’s right to self-rule. So depending on how you look at it, Indonesian became the official language in 1928, 1945, or 1949—though at that time, only a tiny percentage of the nation’s population spoke Indonesian as a first language.

Following independence, the people of Indonesia rapidly abandoned Dutch (to the extent that they had grudgingly adopted it) and began to embrace their new official tongue. It is now the first language of more than 40 million people, and a second language for over 150 million. Although these numbers are still small given Indonesia’s total population of more than 260 million, they represent astonishingly rapid growth for the language.

In 1972, the governments of Indonesia and Malaysia collaborated on a project to reform and simplify spelling for both versions of the language; this consisted largely of eliminating Dutch spellings in favor of more phonetic Malaysian spellings. Malay and Indonesian have about an 80% overlap in vocabulary and are mutually intelligible; the variations in vocabulary, pronunciation, and usage have been compared to the difference between American English and British English. Where Indonesian retains many Dutch loan words, Malay typically replaces these with words based on English.

I like Indonesian a great deal; it has such an elegant structure that it’s tempting to believe it could only have been made artificially. But in fact it’s as natural as the next language, notwithstanding its exceptional capacity for absorbing foreign vocabulary—and contributing to linguistic mythology.

Note: This is an updated version of an article that originally appeared on Interesting Thing of the Day on September 17, 2004.