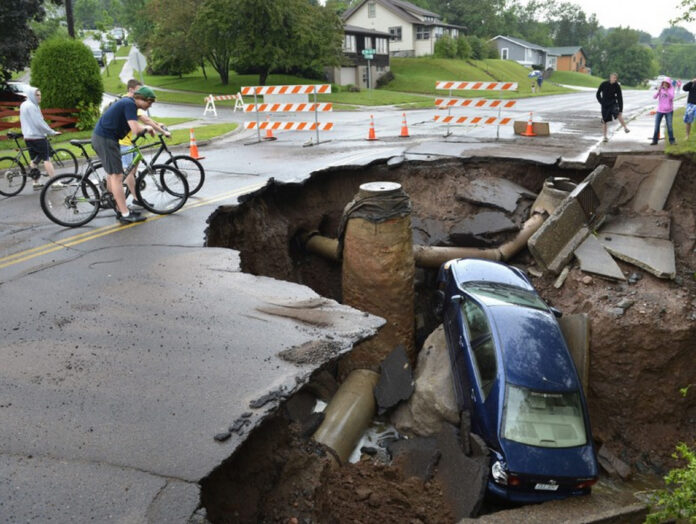 As a California resident, I have experienced my fair share of earthquakes. They’re unsettling (literally and figuratively), and yet they’re something we have all come to accept as a normal occurrence in this part of the world. We like the climate, the views, the culture—in other words, the whole vibe of the area—and we simply accept that it has its…faults. We stockpile emergency supplies, buy earthquake insurance, perform seismic retrofitting on our buildings to reduce the risk of damage, and then go on with our lives. Each time a truly devastating earthquake hits—such as the great San Francisco quake in 1906 or the Loma Prieta quake in 1989—we learn some important new lessons, and soon thereafter feel much safer about the future.

Sometimes that safety is illusory. For example, on December 11, 1995, the ground moved in a very small area of San Francisco’s Seacliff neighborhood, swallowing Howard Billman’s $1.5 million house (which, back in those days, would have been considered a very expensive property—a mansion, in fact). In this case, however, the cause was not an earthquake, but a giant sinkhole measuring 200 feet (60m) across and 40 feet (12m) deep. Sometimes sinkholes are natural occurrences; in this case, however, the culprit was an old sewer tunnel that had deteriorated. The tunnel itself, of course, was much smaller than the resulting hole. That bit of surprising geometry is just one of the things I find interesting about sinkholes. The mechanisms by which they form, and the abruptness with which they appear—often without warning, and in seemingly unlikely areas—make them even more fascinating, in a rather grim way.

Generally speaking, a sinkhole is a depression in the ground formed when the top layer of earth collapses into an empty space below—a process also called subsidence. (If there were no empty spaces—only layers of earth, rock, sand, and water—the ground would remain solid.) The natural question is where those cavities came from in the first place, and the usual answer is that they were always there—unnoticed until the ceiling of stone above them gave way. So what causes a layer of stone to collapse?

Sinkholes are most often found in areas where the bedrock is limestone or another relatively porous stone. Water can dissolve limestone—especially if the water is slightly acidic (due to natural or artificial causes). If acidic groundwater seeps through small cracks in a layer of limestone and into an empty cavity beneath, it can carry away the dissolved rock; the cracks eventually become wide enough that the entire layer weakens and caves in. This type of process is responsible for many of the sinkholes found in Florida and Texas.

Throwing Out the Basement with the Bathwater

But sinkholes can occur for other reasons too. In some cases, the loss of groundwater (due to pumping for municipal water supplies, say) creates new cavities large enough and near enough to the surface that sinkholes result, even though the soil or rock above the cavity was not compromised. Even more interesting, though, is the way damaged sewer pipes or other tunnels, such as the one in Seacliff, create massive underground cavities. In a typical scenario, an old sewer pipe fills to capacity after a rain storm, and due to a blockage or collapse, begins leaking excess water into the surrounding soil. When the water begins to recede, it drains back into the sewer pipe, but now saturated with minerals that have eroded from the adjacent areas. Repeat this process often enough, or with a large enough volume of water, and the empty spaces formed where the soil has eroded away become large enough to turn into sinkholes.

Yet another cause of sinkholes is salt mining—though not always for the reason you might think. Abandoned salt mine shafts can and do collapse, but some sinkholes have a more indirect cause. In Cheshire, England in the late 1800s, salt was produced in great quantities by drying brine that was pumped out of the ground. This brine was a saturated salt solution that had formed by the contact of groundwater with layers of rock salt over many years. Because the solution was saturated, it could not cause further erosion of the salt, and therefore left in place naturally occurring salt pillars that supported the earth above. However, salt producers pumped out the brine so quickly and recklessly that the salt concentration began to decrease rapidly as fresh groundwater came in. The fresh water quickly absorbed the salt that formed the supporting pillars, and the ground collapsed, forming a great many sinkholes. But because the sinkholes were located far from the sites where the pumping took place (in some cases, several miles away), it was impossible for people who had lost their homes to the subsidence to pin the blame on any particular salt producer.

None of this is in any way reassuring. Regardless of the geological and topographical features of the ground you’re walking on, there’s always the chance that some unknown empty space—whether natural or artificial—lurks below, waiting to envelop you in a sinkhole on your very next step. It happens with tragic frequency, though usually not on a scale sufficient to merit widespread attention. But then, you can’t really prepare for a sinkhole the way you prepare for an earthquake, so maybe ignorance is bliss.

Note: This is an updated version of an article that originally appeared on Interesting Thing of the Day on December 2, 2004.