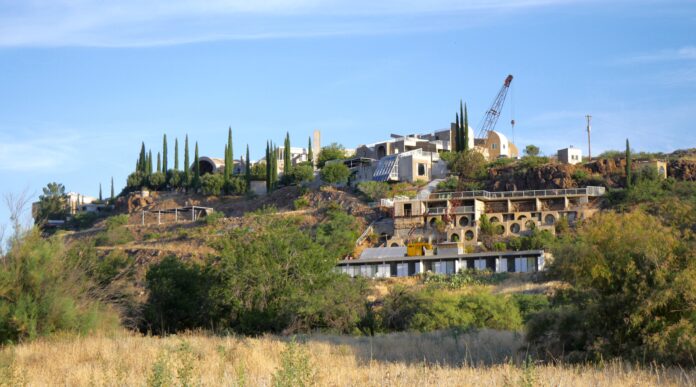 While on a business trip in Scottsdale, Arizona in the early 1990s, I took a walk down the road from the hotel one afternoon and ran into a peculiar-looking place called Cosanti. This compound, an official Arizona Historical Site, is a collection of oddly shaped concrete structures, including large domes and apses made from earthen molds. The first thing a visitor notices is the multitude of handmade bronze and ceramic windbells all over the property. These are made in the foundry and workshops on the site and available for sale in the gift shop. But Cosanti is much more than a new-agey craft center. It’s gallery and studio of the late Italian-American architect and artist Paolo Soleri (who also lived there until his death in 2013). As the brochures on the counter explained, Cosanti is, among other things, a prototype for a much larger and grander construction project called Arcosanti.

City in the Wilderness

Located about 70 miles (110 km) north of Phoenix, Arcosanti is called an “urban laboratory.” What Soleri was testing in this laboratory for nearly 50 years is a concept he called arcology, a blending of architecture and ecology. His vision was to build a 25-acre city where 5,000 people can one day live, work, and play—comfortably, sustainably, and in harmony with nature.

Soleri believed that wastefulness and urban sprawl are among the great evils of the age, and he wanted to eliminate these problems with careful design. According to arcology, well-planned urban areas can use space much more efficiently and benefit from dramatically reduced energy requirements and environmental impact. This means, for example, eliminating cars, roads, and garages by putting all buildings within walking distance of each other. It also means creating multi-use spaces for maximum flexibility, and relying on solar and wind energy for most heating, cooling, and lighting.

Beyond the issues of consumption and pollution that plague the world’s urban and suburban areas, Soleri felt that people have become too detached from each other, and that an effective community requires more human interaction. Accordingly, Arcosanti has been designed with a large amount of shared living space (such as kitchens, gardens, and recreation areas). This seemingly benign fact sets off warning bells for Soleri’s critics, some of whom see Arcosanti as an immense commune, or worse—a cult-like organization. While the project does attract its fair share of New Age types, it also attracts many ordinary people for whom privacy does not necessarily mean a single-family house in a cul-de-sac. But if anything, Arcosanti’s biggest problem is that it hasn’t produced enough converts—or, to use a less loaded term, enthusiasts.

A Time to Build

When construction on Arcosanti began in 1970, Soleri expected it to be completed in 10 years, but less than 5% of the planned project has been completed to date. Construction is done by volunteers, who pay to live and work at Arcosanti during five-week workshops. Fewer than 100 people reside at Arcosanti at any given time, though the site receives more than 40,000 tourists per year. Much of the money used to fund the work comes from sales of the windbells and other pieces of art. But the money and volunteers are not plentiful enough to move the project along quickly. Before Soleri’s death, he left Arcosanti under the control of the nonprofit Cosanti Foundation, which continues to pursue Soleri’s vision.

Even if Soleri’s experiment in the Arizona desert proves one day to be fabulously successful, it will not necessarily signal a triumph of arcology over other forms of urban planning. What works for 5,000 people may not scale up to a city of millions; what works in a hot, dry climate may fail in colder, darker, and wetter areas. But the biggest roadblock of all is not technological, it’s psychological—convincing suburbanites that the cozy, interdependent community of a rural “city” is an improvement over the self-sufficient existence they’ve worked toward their entire lives. After all, arcology assumes that everyone will more or less like, respect, and work happily together with their neighbors. Sounds like a fantasy to me.

Note: This is an updated version of an article that originally appeared on Interesting Thing of the Day on August 21, 2004.