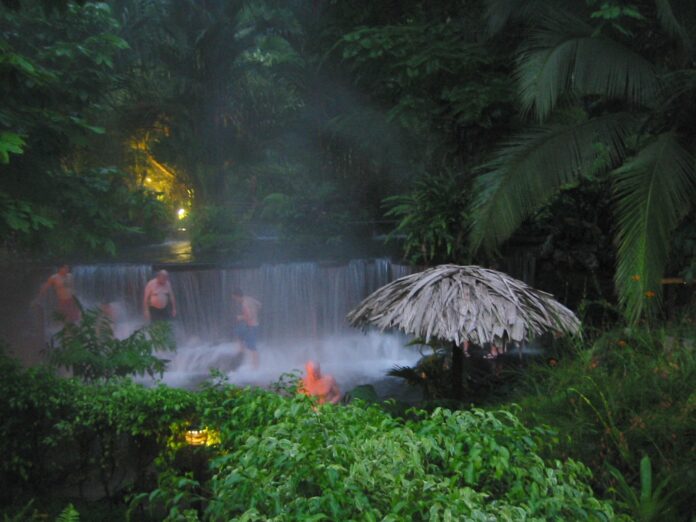 Volcanoes are generally considered rather scary, unsafe places. There was that whole Pompeii incident, of course, and Mt. St. Helens, as well as numerous more-recent examples. Any sensible person knows that you don’t want to be anywhere near a volcano when it erupts, and that volcanoes have the nasty habit of erupting at unpredictable and very inconvenient times. Nevertheless, dozens of active volcanoes around the world have become major tourist destinations (and indeed, I’ve visited more than one myself). PR types minimize the danger, of course (“Over 27 months without a tourist fatality!”), and, statistically speaking, the odds do indeed favor a safe visit. But many thousands of tourists take the risk because volcanoes are so strange and interesting. Most of us know volcanoes only from stories that are set in faraway places and therefore have a mythological character; seeing an active volcano in person seems a little bit like seeing a unicorn—something that doesn’t seem like it could really exist.

In central Costa Rica, the Arenal Volcano offers the quintessential volcano tourism experience. Practically the entire economy of the nearby town of La Fortuna is based on tourism. There are hotels, lodges, restaurants, tours, hikes, and activities of every description that cater to people who make the long drive to the area in the hope of hearing the rumble and catching a glimpse of spewing smoke, ash, and steam from Arenal. But by far the most famous (and most expensive) attraction besides the volcano itself is Tabacón Hot Springs, part of the Tabacón Grand Spa Thermal Resort.

Forgotten But Not Gone

Tabacón was once a tiny, quaint village nestled at the base of Arenal Peak. The mountain had been a volcano once, yes, but it hadn’t erupted since 1525 so its history was effectively forgotten. In 1968, a class of schoolchildren in Tabacón was given the assignment of drawing a picture of their town. When one child labeled the mountain “Arenal Volcano,” the teacher marked it wrong: “Arenal Peak is not a volcano, it’s just a mountain.” A few days later, the mountain erupted. The entire village of Tabacón and the nearby town of Pueblo Nuevo were wiped out, destroyed by ash and hot gases. Although many of the town’s residents fled when the rumbling began, 78 people died.

But after the shock of the tragedy wore off and volcanic activity mostly settled down, the volcano turned into a tourist attraction, eventually becoming one of the top destinations in Costa Rica. Such was the popularity of the volcano that enterprising developers decided to erect an elaborate resort on the site of the former town of Tabacón, and that is now the epicenter of tourism for the area.

Over the next four decades, there were several other significant eruptions and a few fatalities. A major eruption in 1998 forced the evacuation of nearby hotels, and lava came rolling down the hill as close as 500 feet (about 150 meters) from the resort. In between these major events, Arenal remained quite active, with minor eruptions many times a day. By day there were puffs of smoke accompanying the menacing rumbles, and on a clear night you could see orange streaks running down from the peak. All this merely enhanced the site’s appeal as a tourist destination. Since 2010, Arenal has been mostly quiet, with only occasional activity, though of course that could change at any moment. The lack of potentially deadly volcanic activity has knocked Tabacón down a bit on the list of most popular attractions in Costa Rica, but there’s still much to recommend it.

Tabacón now consists of two sites: a hotel with famously expensive views of the volcano, and the expansive hot springs and spa complex across the road and around the corner. The term “hot springs” is not strictly accurate, as the source of the water is an underground river, but the water is heated naturally by the volcano so the net effect is the same. The water is channeled into a series of interconnected pools where, because the hot water is mixed with cold water in varying proportions, the temperature ranges from briskly cold to 105°F (41°C). Signs next to each pool indicate its temperature, though I can say from experience that some 41° pools are hotter than others.

Caution: Water May Be Hot

The pools themselves, some of which include waterfalls you can sit under for a natural massage, were for the most part constructed from local stone in such a way as to look quite natural. I realized just how natural they were the first time I stepped in one. The bottom was littered with large, slippery, irregularly shaped stones. It was sometimes quite difficult to move around without slipping, tripping, or stubbing a toe. Then I began to notice there were very few handrails, no signs urging caution, and no requirement that guests sign a release form before using the hot springs. I laughed to myself when I realized that such a place could never exist in the United States; it would be either regulated or sued out of existence in a week. That made me enjoy the experience all the more—a place where adults were given credit for some common sense, where simple pleasures could be appreciated without a generic, artificially sterile environment. Imagine that.

The grounds where the hot springs are located are meticulously manicured but still appear to have been carved out of a little corner of rain forest, which in fact they were. It gives you a sort of “Jurassic Park” feeling—a controlled slice of a wild environment. And despite the large numbers of tourists, it is a wonderfully relaxing place.

Float Me a Loan?

I had just one disappointment: a much-hyped warm pool with a swim-up bar. I had never been to one before and that sounded like great fun. Contrary to what was stated in our guide book, the swim-up bar accepted only cash. (Granted, this was quite a few years ago, and things may have changed since then.) If I may say so, a cash-only swim-up bar is about the silliest thing I’ve ever heard of. Once you get to the bar and figure out you can’t pay for anything, you have to get out of the pool, go back to the locker room, get some cash, return to the pool and wade out to the bar carefully, holding bills so they don’t get wet—and with nowhere to put your change. After all that aggravation, you’re going to want a very large piña colada to settle your nerves. Fortunately, those are easily obtained.

After a long day of trekking through the hot, humid rain forest, there’s nothing like a nice relaxing soak in a hot, humid spa. No, really. Strangely enough, the hot water actually feels very refreshing, especially in the evening. We didn’t plan far enough ahead to get reservations for a room at Tabacón—which is just as well since we got a better deal and a great view at another lodge down the road (the Arenal Observatory Lodge)—but day passes are available for a modest fee, and often included as part of other tour/adventure packages. When Arenal is not busy devastating the countryside, it’s often clouded in, so you may travel halfway across the country and find there’s nothing to see. The hot springs themselves are still worth the trip, but all the same, I suggest watching your step on those wet rocks.

Note: This is an updated version of an article that originally appeared on Interesting Thing of the Day on July 18, 2003, and again in a slightly revised form on September 6, 2004.