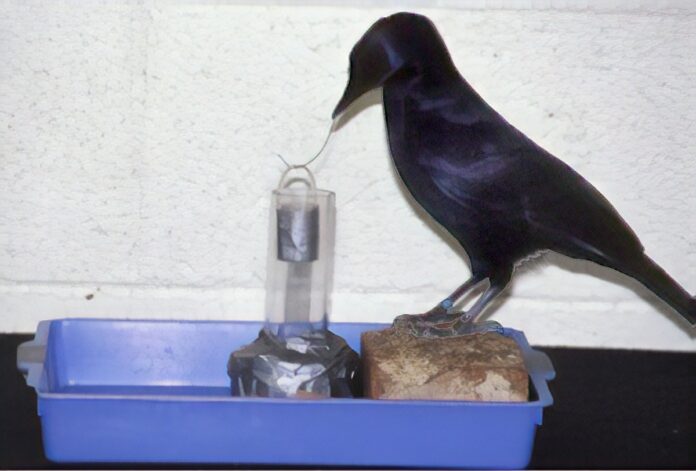 Humans, on the whole, tend to think of the ability to make and use tools as a defining characteristic of our species, something that sets us apart from other animals, that proves we’re more intelligent and more highly evolved. But there are counterexamples. A few species of animals use tools, the canonical example being a stick pressed into service to fish insects out of a log or burrow for food. But there are even a few nonhuman species that make their own tools. It’s not too much of a stretch to think of other primates making tools—especially if you’ve read Congo by Michael Crichton. And in fact, some chimpanzees and orangutans have been known to make simple tools (though not, as far as anyone knows, stone paddles). But even some birds have been observed to make their own tools. One such species is the New Caledonian crow (Corvus moneduloides), a bird with surprising and impressive abilities.

At the University of Oxford, researchers in the Behavioural Ecology Research Group are studying tool use among New Caledonian crows. It’s one thing to observe animals using tools in the wild, but in the relatively controlled environment of a university laboratory, scientists are able to watch (and film) the crows much more extensively and determine in greater detail how they behave. Their findings have given the crows (and the people studying them) minor celebrity status. Time after time, the crows have unhesitatingly used a variety of wooden tools to retrieve food by pushing or pulling it out of a tube.

But these crows also make new tools to accomplish specific tasks. It had long been known that New Caledonian crows in the wild made simple tools from leaves and twigs, but they have even figured out how to make tools out of materials they could never have encountered before. In one experiment, researchers provided a pair of crows, Betty and Abel, with two pieces of wire—one straight, one hooked. They put some food in a small bucket with a handle and dropped the bucket into a tube, so that the only way to retrieve it would be to pull it out with the hooked wire. After Abel tried and failed, he flew off with the hooked wire, leaving Betty with the straight wire. No problem—she immediately bent it into a hook, pulled out the bucket, and had lunch. The first time I saw a video of this, I was absolutely stunned. It sounds like such a simple task, but it is just not the kind of ability I’ve ever thought of animals as having—certainly not birds.

Crows Just Want to Have Fun

New Caledonian crows—at least those being observed in the lab—seem to use tools constantly, not just when they’re trying to get food. This poses some unexpected challenges for the scientists who work with them. The crows are so adept at using tools that researchers have come into the lab to find the fire alarms disassembled. And crows are just as likely to try prodding around in an electrical socket as a test tube. If you thought it was difficult to child-proof your living room, imagine crow-proofing a university research facility.

But lest you think these crows are all work and no play, they also seem to use tools just to have fun. Dr. Jackie Chappell, a researcher who spent years working with the crows, had this to say about the way they like to play:

One aviary in particular has an obsession with stones. They pick stones up from the aviary floor and bring them into the housing room. We then find stones everywhere. They carefully place them inside the tubes that we use to test their tool use, and they have hammered perfectly sized stones into holes we’ve drilled in logs to give them natural probing sites. They are such a tight fit that we can’t get them out. They also play at rolling pebbles inside a tube. We have some film of them carefully inserting a pebble into a plastic tube, then slowly lifting one end of the tube so that the pebble rolls to the other end (and makes a nice noise—we don’t know if this is the objective), then they repeat the procedure from the other end. This can go on for minutes on end.

Is “Bird Brain” a Compliment?

While it’s very interesting that New Caledonian crows make and use tools, what exactly does this prove? By itself, nothing. But what scientists studying the New Caledonian crow hope to demonstrate is evidence of complex cognitive abilities—including things like abstract reasoning. It may be that the crows’ cognitive abilities are limited to tool-related tasks, or it could be that they’re more general. A series of experiments is underway to find out.

One type of experiment involves selectivity. Observation in the wild suggests that crows select their tools according to the task at hand (or beak). Given a range of tasks and materials the crows have never encountered before, will they consistently select (or make) the best tool for the job? Likewise, are they flexible in their use of tools? Having used a certain type of tool for a given task, will they also use less-suitable tools for the same task if necessary? And does their use of tools suggest an implicit understanding of the basic rules of physics?

Tools Are for the Birds

Tool use by New Caledonian crows also raises a host of other questions. For instance, how do they learn to do this? Are there secret tool-making classes in the trees, or do young birds just watch their parents attentively? Once acquired, how does the knowledge spread? Is there something unique in their social interactions that facilitates learning about tools? And why don’t other birds make tools? The New Caledonian crow doesn’t have the largest brain among birds or the most complex social system, so what makes it unique in this regard? Could other birds learn how to use tools too, given the right environment? For that matter, could a New Caledonian crow teach another species of bird to use tools? These are just a few of the many questions scientists are hoping to answer.

How soon these answers arrive will depend on whether the researchers can keep ahead of the birds. The crows are so clever at solving problems that they often come up with entirely novel ways of accomplishing tasks, thus derailing carefully designed experiments. As I read about the research, I’m reminded of the white mice in Douglas Adams’s Life, the Universe and Everything. The furry little creatures were really “hyperintelligent pan-dimensional beings”; while scientists thought they were running experiments on the mice, the mice were actually experimenting on humans. But I don’t worry about a conspiracy of crows. Any creature that likes tools is OK with me.

Note: This is an updated version of an article that originally appeared on Interesting Thing of the Day on May 9, 2003, and again in a slightly revised form on February 1, 2005.