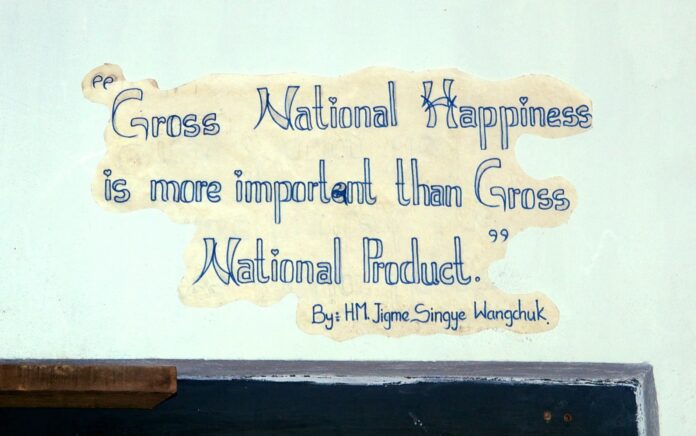 The tiny nation of Bhutan, located between its gigantic neighbors, China and India, has a different way of measuring its success. Known as gross national happiness, this measurement of the quality of its citizens lives’ as opposed to their productivity, turns the usual economic indicator, gross domestic product (GDP), on its ear.

Also known as gross national product (GNP), gross domestic product refers to the total value of goods and services produced by a country within a certain time period. This measurement is meant to show the size of a country’s economy, and is sometimes used to track the standard of living, as it is assumed that increased productivity translates into better living conditions for citizens.

There are some flaws to this approach, however. Since GDP does not discriminate between positive and negative causes of productivity, a natural disaster can add to the GDP (because of the resources and work put into counteracting its effects), although the event itself is hardly in the best interests of society. Similarly, environmental catastrophes (such as oil spills) and the ravages of war inflate the GDP while having an ill effect on human life and the environment.

Another deficiency of using the GDP as a measurement of national advancement is that it has an extremely narrow focus. For example, using the GDP measurement, the unpaid work of child rearing and housekeeping has no value, nor do non-monetary transactions such as bartering for goods and services.

In short, the whole sphere of human existence cannot be reflected using the GDP, and in fact, GDP distorts the picture because it counts all economic activity as positive, without the counterbalance of what has been lost in terms of environmental damage and human suffering.

For these reasons, economists have come up with another measure of economic growth—the Genuine Progress Indicator, or GPI. This indicator takes into account both the positive and negative effects of a country’s economic activity, in theory providing a much clearer picture of the well-being of its citizens.

WWBD (What Would Buddha Do)?

In much the same vein, in 1972, the king of Bhutan, Jigme Singye Wangchuck, coined the term gross national happiness (GNH) to describe the path Bhutan would take to economic development. Drawing on the spiritual tradition of Tibetan Buddhism, GNH is designed to balance economic progress with the well being of the Bhutanese people.

To determine how well the country is meeting these goals, and to determine future policy decisions, Bhutan conducted surveys of its population in 2008, 2010, and 2015. The results were assessed using the Gross National Happiness Index, which was developed in cooperation with researchers from Oxford University.

In 2011, the UN General Assembly passed a resolution entitled “Happiness: towards a holistic approach to development,” highlighting Bhutan’s focus on GNH as a model for other nations to follow. In 2012, UN Secretary General Ban Ki-Moon and Bhutan’s Prime Minister organized a High Level Meeting on the subject “Well-being and Happiness: Defining a New Economic Paradigm” at which the first World Happiness Report was issued. Subsequently, the United Nations designated March 20th as International Day of Happiness.

While Bhutan is held up as a model for other countries to follow in creating a more humane economy, it has not been entirely successful in creating its own peaceful and productive society since Gross National Happiness was first introduced. The government’s concern with conserving the country’s cultural traditions, and restricting outside influences, has led in the past to restrictions on access to media and a traditional dress requirement (although this has eased a bit in recent years).

Of more concern is the mass exodus in 1990 of 100,000 citizens of Nepalese descent and Hindu faith in response to an attempt by the government to assimilate this group into the dominant Bhutanese culture, which led to protests and subsequent harsh treatment in punishment of the protests. These refugees lived for many years in camps in Nepal, while Bhutan, Nepal, and India failed to agree on how they should be accommodated. In 2008 various countries—the United States, Canada, Australia, the Netherlands, Denmark, New Zealand, and Norway—began taking them in, with over 112,000 of the refugees resettled abroad to date.

I Can’t Believe It’s Not Bhutan

While the past implementation of Gross National Happiness in Bhutan led to repressive policies, the recent introduction of democratic elements into Bhutan’s government (elections began in 2007) is seen as a positive trend for its living up to the ideal of GNH. And that ideal is still a worthy goal; there is something very attractive about belonging to a society that views the pursuit of gross national happiness as its prime objective. It would be extremely interesting to see a shift to this kind of thinking in other countries: how would our world change if the United States, the European Union, and other large economies implemented this policy? It’s impossible to know for sure, but it’s nice to think about a world in which success is measured in more than dollar signs.

Note: This is an updated version of an article that originally appeared on Interesting Thing of the Day on August 21, 2006.