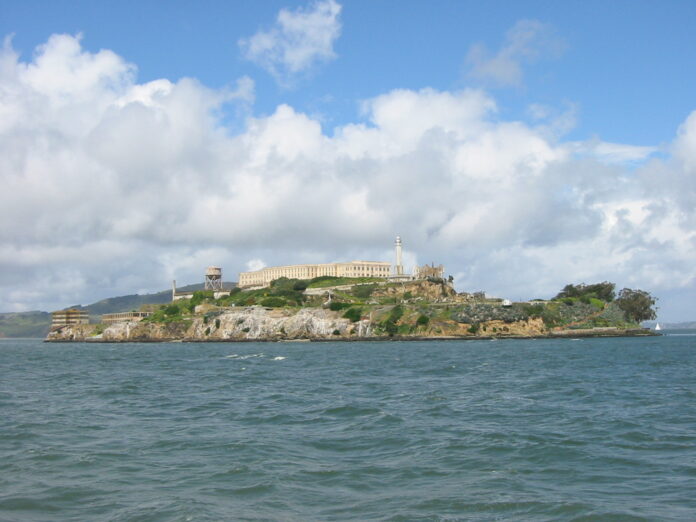 San Francisco is one of the most beautiful cities in the country, with more famous landmarks, scenic vistas, and other tourist attractions than you can shake a stick at. But during the years I lived there, the only times I seemed to experience any of these things for myself were when friends or family visited from out of town. That’s when we rode the cable cars, visited Fisherman’s Wharf, went see the Golden Gate Bridge, eat in Chinatown, checked out the museums, and so on. And when we did, we thought, “Wow, this is cool. What a great city we live in! We should do this more often.” And inevitably we didn’t…until the next visitor showed up.

One sight we rarely get excited about, though, was the one visitors invariably wanted to see: Alcatraz, the little island out in San Francisco Bay that was once a federal penitentiary. We’ve been there many times, and the novelty wore off after the first couple of visits. The first time I went there, I didn’t understand what the big deal was until I heard people talking about a movie called Escape from Alcatraz. It did seem interesting to visit the place where a movie had been set, even though I hadn’t seen the movie at that time. Once there, the tour guides regaled us with stories about notorious criminals who had served time at Alcatraz—again, I hadn’t heard of these people, but I took the guides’ word that they were infamous and that therefore it must be a great privilege to stand in their former cells. And frankly, it’s a good thing I did have those stories to help spark my interest, because when you get right down to it, Alcatraz is a thoroughly unpleasant place: cold, windy, dilapidated, and depressing. No wonder it loses its tourist appeal after a while.

Of course, this unpleasantness was not lost on the officials who decided to designate the island a prison in 1934. That, along with the site’s isolated, escape-resistant location made it the ideal home for some of the nation’s most dangerous and recalcitrant offenders until 1963.

As the old saying goes, “familiarity breeds contempt.” And yet, I realize that there must be plenty of people in the rest of the world who still haven’t seen the movies, heard the stories, and endured one too many visits to the island nicknamed “The Rock” (yes, there was a movie by that name too), and that such people might still find Alcatraz a bit more interesting than I do. Rather than rehashing the entire history of Alcatraz, about which you can read any number of perfectly good accounts, I thought I’d share just a few of the most interesting things I’ve learned about Alcatraz:

The sight of a deteriorating former prison facility in the Bay contrasts sharply with the nearby Golden Gate Bridge and scenic Angel Island, not to mention San Francisco’s famous skyline. Alcatraz is famous mainly for being famous, its harsh, decaying outline now perceived as beautiful by residents of the city where people once complained about having their Bay views marred by a prison. And that, I think, is the very most interesting thing about Alcatraz—its mysterious transformation from a place of pain to a place of pride.

Note: This is an updated version of an article that originally appeared on Interesting Thing of the Day on March 9, 2005.