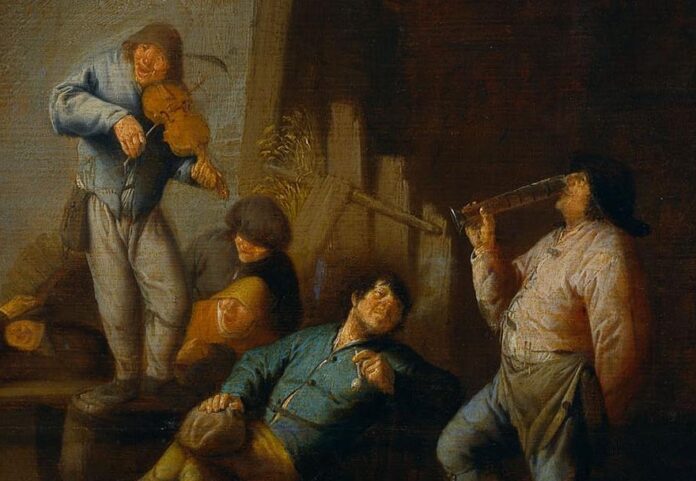 I never cease to be amazed at how frequently the interesting things I merely imagine turn out to be real. For instance, while writing a few stories years ago on a theme we called “Throwing Down the Goblet,” my research in the field of goblets and challenges led me to wonder whether there might be some special type of goblet used in drinking games. A quick web search told me, after a fashion, that such goblets do indeed exist. In fact, depending on one’s willingness to stretch the definition of “goblet,” which in my case was boundless, there may be several very different sorts of goblets that figure in drinking games.

For example, there’s a dice game played in Bolivia called Alalay. It’s quite similar to Yahtzee, in that it involves rolling five dice, with scoring based on the values of various number combinations. As in Yahtzee, the dice are placed in a small container and shaken before being thrown. In Alalay, this container, which is made of stiff leather, is called a goblet. Alalay is sometimes played as a drinking game, though the goblet itself is never used for alcohol; it wouldn’t do to get the dice wet.

I’ll Drink to That

But I found an even closer and more literal match for drinking-game-related goblets: something called a passglas (sometimes spelled pasglas)—a design that was popular in Germany, the Netherlands, Denmark, Finland, Estonia, and Sweden during the 16th through 18th centuries. A passglas is a tall glass—sometimes cylindrical but more often having six or eight sides—that looks suspiciously like a chemist’s graduated cylinder. It is tapered and stemless but, like all goblets, has a foot. And not unlike a graduated cylinder, it’s marked with glass rings or bands at regular intervals.

Etymologically sophisticated readers will guess, correctly, that passglas means “pass glass,” and the name accurately describes its use. The glass was filled with beer (or, depending on the locale and the desired depth of inebriation, schnapps). The first participant drank down to the first mark and passed it on, but if he—naturally, it would be a “he”—drank too much and the liquid level dropped below the line, he would be obligated to drink all the way to the next line, and so on. Presumably one’s precision decreased as the liquid drained, increasing the rate of consumption. Depending on the number of participants and the type of alcohol used, several refillings could be required in order for all parties to reach a suitable state of intoxication.

The Art of Drinking

Despite the apparent ubiquity and popularity of the passglas in its heyday, it’s rarely mentioned in literature or depicted in artwork—but there are some examples. Seventeenth-century Dutch artist Adriaen van Ostade specialized in paintings and sketches involving peasants, drinking, and drinking peasants. One of his more obscure paintings, called Het dansende paar (“The Dancing Couple”), painted some time between 1680 and 1685, shows a man drinking from a passglas while the next drinker eagerly waits his turn.

Nowadays passglases are sold as antiques or found in museums, and are little known outside the parts of Europe where they were once popular. This is too bad, because although modern drinking games may be more sophisticated in some ways, they rarely if ever involve a test of how skillfully one can actually drink. Precision drinking competitions could add an entirely new dimension to, say, New Year’s Eve celebrations—but a modern Pyrex measuring cup doesn’t match the simple elegance of the passglas.

(For a full, uncropped view of Adriaen van Ostade’s “The Dancing Couple,” from which the image above was taken, see Wikimedia Commons.)

Note: This is an updated version of an article that originally appeared on Interesting Thing of the Day on September 25, 2003, and again in a slightly revised form on December 29, 2004.