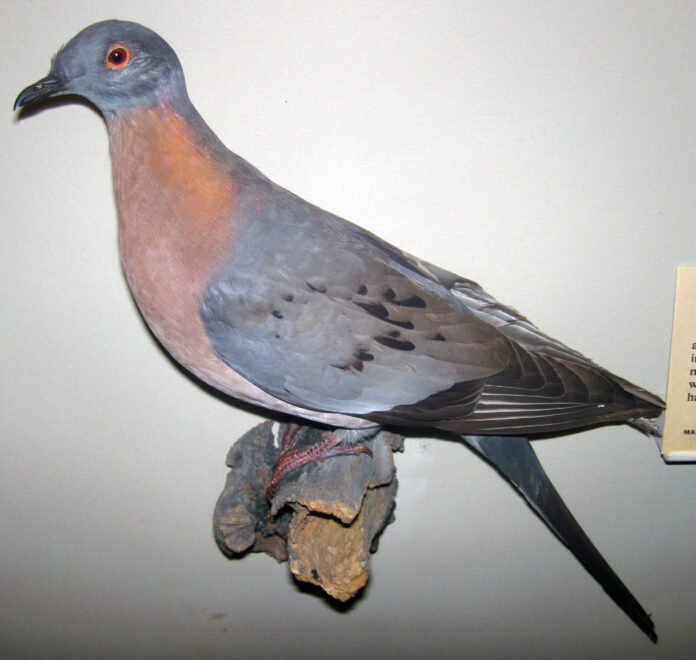 I have a confession to make. Even though my wife, Morgen, is an endless fount of interesting topics, when she suggested that I write about passenger pigeons, my first reaction was a yawn. How interesting can pigeons be? There are bazillions of them out there—I practically trip over them walking down the sidewalk every day. “But passenger pigeons are extinct,” she said. So are lots of animals, and that’s very sad, but it still doesn’t make them particularly interesting to the general public. She kept insisting that no, really, this particular kind of extinct pigeon is truly fascinating, and I kept displaying a complete lack of enthusiasm. Finally, she started reading some facts off a webpage. After the first couple of items, I thought, “Yeah, OK, that’s a bit interesting, but if that’s all there is to it…” Only it wasn’t. She kept reading—and I kept saying “Wow.” Even I had to admit, yes, the story of the passenger pigeon is quite interesting. So by way of penance, allow me to present the poop (as it were) on passenger pigeons.

The last passenger pigeon in the world died just over 100 years ago. In fact, we know exactly when and where the species went extinct: Tuesday, September 1, 1914, at 1:00 P.M. Eastern time at the Cincinnati Zoo. We even know the last bird’s name: Martha. She was 29 years old. It’s rather unusual, to say the least, that we should have such detailed and precise information about the moment when a species meets its demise. What’s even more extraordinary is that just a century or so earlier, passenger pigeons had been more numerous than any other bird in North America—numbering in the billions.

The word “passenger” in the name does not mean the pigeon liked to hitch rides on other animals (nor should the passenger pigeon be confused with the carrier pigeon, an entirely different animal). Rather, the name apparently comes from the French word passage, which means, roughly, “passage” (or “transit” or “crossing”); it referred to the birds’ massive and frequent migrations. The adjective form of passage is passager, and this apparently became “passenger” in English via folk etymology. The scientific name is Ectopistes migratorius, which means, more or less, “migrating wanderer.”

Passenger pigeons, a relative of the Mourning Dove, were remarkable in several respects. They could fly unusually fast—upwards of 60 mph (about 100kph)—though they did not use this speed for hunting; they ate mostly nuts, seeds, and berries. They were extremely social animals that liked to live and travel in large groups at all times. A roosting colony could comprise well over one million birds and cover more than 800 square miles (2000 sq km) of forest, with as many as 100 nests per tree. When a flock migrated, it moved in an almost solid unit that could stretch for 300 miles (500 km); observers frequently remarked that they darkened the sky for days at a time. Around the beginning of the 16th century, passenger pigeons may have constituted as much as 40% of the bird population of the United States—up to 5 billion individuals—and, according to some estimates, were in fact the most numerous bird on Earth.

So Much for Safety in Numbers

Because the birds always stayed in large groups, the small animals that were their main predators posed little threat; they could never kill enough of a flock to threaten the group’s survival. This behavior, however, became their undoing once the human population began to balloon in North America. As European settlers and their descendants moved across the continent, they cut down many of the trees that had provided food and shelter for the passenger pigeons. This had relatively little effect on the birds’ overall population, but it did restrict their habitat. Because birds nesting by the hundreds of thousands or millions in a confined area were such an easy target—and, perhaps, in “retaliation” for destroying crops—farmers and hunters began to trap and kill passenger pigeons in huge numbers, selling them (very cheaply) for meat.

By the mid-1800s, the number of passenger pigeons was already dwindling noticeably, but this only increased the rate at which they were destroyed—sometimes as many as tens of thousands per day for months on end. Even though conservationists raised an alarm, very little was done to stop the hunting. Some researchers believe it wouldn’t have mattered by that point; since the birds seemed to require very large colonies for successful breeding, their population may already have dipped below a sustainable level before anyone realized there was a problem. In any case, the very rarity of the passenger pigeon by the late 1800s seemed to increase hunters’ determination to find just one more. The last known wild passenger pigeons were shot in 1900, but a few may have survived longer. One story I read from the early 1900s was truly chilling: a hunter who’d believed the passenger pigeon was already extinct suddenly spotted one years later. He was excited and nervous, because he realized that this would be the last chance anyone would ever have to kill one. So he took his shot and did it in. Apparently he told the story with a great deal of pride.

A few passenger pigeons remained in captivity after that, but all attempts to breed them failed. Martha, who had been named after Martha Washington, was the last living member of her species; her remains were on display at the Smithsonian for many years afterward. Even after Martha died, unconfirmed reports of passenger pigeon sightings appeared occasionally until at least 1930. But now the species is known definitively to be extinct. A genetic engineering project is currently underway (think: Jurassic Park Lite) with a goal of de-extincting the passenger pigeon. No one knows how close these hyphothetical new birds will come to real passenger pigeons, especially when it comes to instinctive behavior. Will they, or anything like them, ever again number in the billions? Will North Americans ever again see anything like their great migrations? Only time will tell.

The passenger pigeon is of course not the only animal humans have driven to extinction, but it’s an especially striking case. Had we exterminated, say, all the world’s cockroaches instead, I think there would be less to mourn. But that implacable impulse to destroy every last one of some creature is, I’m afraid, still a troubling part of human nature.

Note: This is an updated version of an article that originally appeared on Interesting Thing of the Day on May 13, 2005.