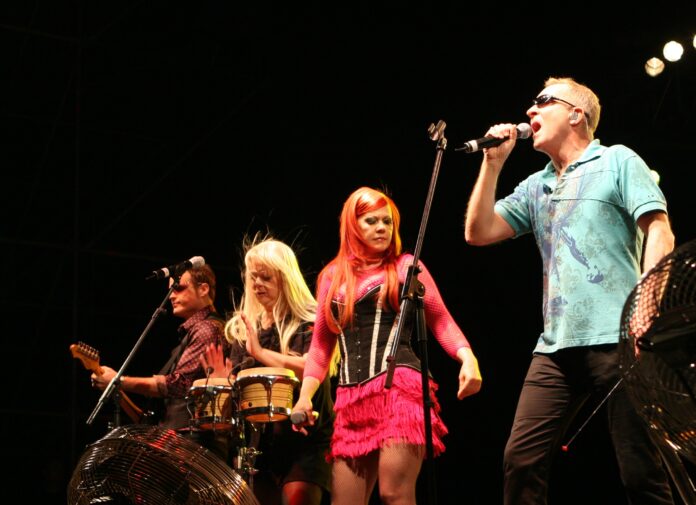 Image credit: By Alterna2 [CC BY 2.0], via Wikimedia Commons

I first wrote about the B-52s here way back in 2003. Having just seen them in concert yet again this past weekend (checks calendar; yes, it’s 2018 and the B-52s are still a thing!), I thought I should dust off and update the story of one of my favorite bands. I was a bit surprised to notice how much has changed since then—and how much hasn’t.

Most people who have heard of the B-52s know them as a dance band from a few decades ago, the group behind “Rock Lobster” and “Love Shack.” Their music is often regarded as lightweight and disposable, made memorable only by its quirkiness—Fred Schneider’s shouted or chanted vocals; Kate Pierson’s and Cindy Wilson’s outrageous wigs and luscious harmonies; the signature licks of guitarists Keith Strickland and Cindy’s late brother, Ricky Wilson. But this group of friends from Athens, Georgia, who named themselves after the local slang expression for a beehive hairdo, are icons who were once iconoclasts.

As recently as 1996, long after the band’s popularity peak, I knew nothing at all about the B-52s. I was vaguely aware that there was a band by that name, but I had no idea what sort of music they played and couldn’t name a single one of their songs. Then a friend loaned me a B-52s CD and I was immediately hooked. I thought it was the cleverest and most inventive music I had heard in a long time—funny, articulate, and very, very strange.

Detour Through Their Minds

Most of their music is upbeat and danceable, but not the kind of cookie-cutter pop produced by many of their peers. It might be called “alternative,” except that it doesn’t take itself as seriously as most alternative music. The thing that makes it alternative is that the music has never been about fitting into a mold. For the B-52s, music is all about having fun. B-52s songs were generally written as group efforts that sprang from stream-of-consciousness jam sessions. It turned out that audiences had as much fun listening to their unusual music as the band did creating it, and their commercial success was largely accidental. In their music, as well as their costumes, videos, and concerts, the band presented an unabashed “different is OK” attitude. Music wasn’t serious business; it was about enjoying yourself and the company of your friends.

Even so, their songs show tremendous creativity and musical skill. The subject matter is sometimes absurd, yet the lyrics always sound like they were crafted with great care to produce the maximum artistic (or comedic) effect. This is perhaps best shown on the band’s 1986 Bouncing Off the Satellites album. This album never got much recognition, because Ricky died just before it was released and the band could not bring themselves to promote it. But the tunes on that album showcase the best of the B-52s: intelligent, quality music that works because the band’s only concern is being who they are.

The B-52s—all four surviving members—are still around and still active, although Keith retired from regular touring in 2012. I’ve been fortunate enough to see them in concert at least four times, most recently on October 6, 2018. In concert, they still please the crowds, if not quite the same way they once did. Fifteen years ago I remarked that Fred lacked the energy he once had, that Cindy struggled with all those high notes, and that the band’s average girth had increased noticeably. That’s all still true, and it’s all OK, because look, we all get older and these things happen. But I jumped to the wrong conclusion. I thought they’d lost their mojo, and were in a permanent loop of doing nothing more than phoning in their old hits—almost a parody of themselves.

Songs for a Future Generation

I’ve been pleasantly surprised on a few counts. In 2008, the band released Funplex, their first studio album in 16 years. It was a surprisingly good album, even though it was a bit different in character from their earlier music. Coinciding with that album release was another gigantic change: the band’s name officially changed from The B-52’s to The B-52s. I think that was a good call—the apostrophe was undoubtedly what had been holding them back all these years.

I kid, but on stage the band seemed lighter, peppier, and more relaxed than they did when I saw them 15 years ago—and those years haven’t diminished their delivery. Sure, the set was pretty short and Fred, Cindy, and Kate didn’t sing the way they did in their 30s. But they also were clearly having a great time, and so was the audience. My sense was that they’ve reached the point in their career where they don’t worry about making new hits; they find joy in delivering stunning, crowd-pleasing renditions of their big hits from years past, and that’s exactly the right choice both for the band and for the fans.

I missed the B-52s during their heyday, and I wish I could have experienced the freshness and novelty of the band as it was in the late 1980s and early 1990s. But the people who created “Theme for a Nude Beach” and “Channel Z” are still giving us more of that Good Stuff.

Note: This is an updated version of an article that originally appeared on Interesting Thing of the Day on May 3, 2003, and again in a slightly revised form on October 31, 2004.