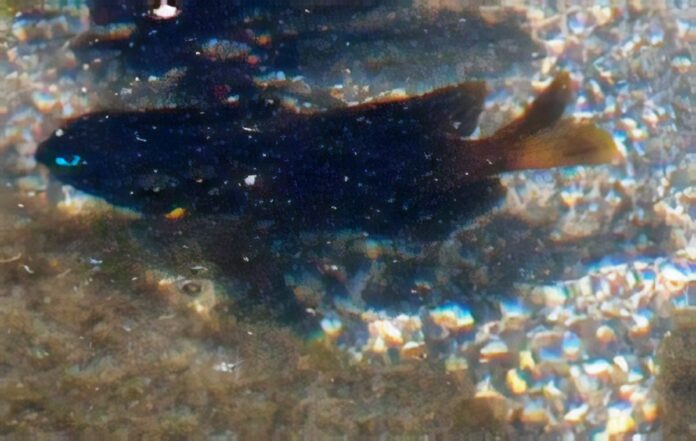 Note: This is a “classic” Interesting Thing of the Day article from over 10 years ago. It has not been edited recently, so it may contain broken links, outdated information, or other infelicities. We plan to eventually update or retire most classic articles, as time permits.

On a recent trip to the Galapagos Islands, I was astonished when our guide showed us how damselfish (family Pomacentridae) farm algae on their own. It was also amazing to see how aggressively protective they were of their farms. To demonstrate, our guide took a sea urchin and dropped it into the damselfish’s algae farm, and within seconds the damselfish pushed the sea urchin out of the farm. Some damselfish farm algae on coral heads and nip the coral to create cuts that encourage the algae to grow. Apparently, they are known even to attack human beings that swim near their farms. Fortunately, they are very small fish with small teeth, so death by damselfish is unlikely!

The damselfish inspired me to learn about other animals that farm their own food. It turns out that besides humans, four kinds of animal are known to farm fungi (fungiculture)—leaf cutter ants, termites, ambrosia beetles, and marsh snails.

We humans capitalized on the invention of agriculture to place ourselves on the path to achieve a dominating position in our ecosystem. It is our gregarious nature, societal structure, communication skills, and a measure of engineering skills that were key. Let’s examine how non-human farmers stack up in these areas.

All three of the insect farmers have very well organized societal structures that in all likelihood developed before they learned fungiculture. They have built complex societal structures with task specialization that would put a Henry Ford or a Frederick Taylor to shame. This has also allowed these insects to sustain very large populations—colonies of leaf cutter ants (previously discussed on Interesting Thing of the Day) are known to have tens of millions of ants.

Leaf cutter ants belong to a group of ants called “attines”—the genus Atta. Attines are notorious for their ability to deforest vast tracts of land in a matter of days. All the ants in the leaf cutter ant community are specialists—the queens that are the breeders and also start the farming area called nests, ants that specialize in cutting the leaves from the trees, ants that specialize in reducing the leaves to a mulch, and ants that specialize in harvesting the fungi. There are also garbage worker ants that help manage the waste in garbage chambers that are kept isolated from the nest. Since there is a risk of contamination if these garbage worker ants mingle with the rest of the ants, these garbage workers cannot leave the garbage chambers. Scientists have observed that if these garbage worker ants go to the main part of the nest, they are forced to return to the garbage chambers or even killed by the other worker ants. There are 210 species within 12 genera of attines that are farmers. Ants have developed at least 553 strains of farmable fungi belonging to seven different genera.

Ambrosia beetles (order Coleptera) are a type of bark beetle. In the ambrosia beetle community, the females create farming areas inside the trees called galleries where they lay the eggs; the males do the rest of the work. The beetles cultivate a fungus called “ambrosia” that serves as food for both the adults and newly hatched larvae. The fungi cultivated by the ambrosia beetles are not pathogens, but the tunneling itself can kill trees. The fungi carried by other closely related bark beetles, however, can be deadly to plants all by itself. About 3,400 species of farming beetle are known.

About 330 species of termites farm fungi. Fungus-cultivating termites are found in tropical Africa and Asia. Termite colonies consist mainly of worker types, which work to feed the other colony members. There are also soldier types to fight predators and the queen, which reproduces. Similar to ambrosia beetles, they are monoculturists, as they farm only one type of fungus—which in the case of termites is Termitomyces (Termite Fungus).

It was only recently that marsh snails (Littoraria irrorata) were added to the list of animal farmers; they are also the first in the marine world known to be fungiculturists. Marsh snails live in salt marshes and their main food is a fungus that grows on cordgrass leaves. Similar to the damselfish, they cut the cordgrass leaves to create wounds, and lay their excrement into the wounds. The excrement contains the fungal spores (like seeds) and also the nutrients for the fungus to flourish in. Although in snail colonies as many as 1,000 snails per square meter can be found, snails are non-social. Therefore, complex societal structures are not a requirement for farming.

The insect farmers use specialized chemicals called pheromones to communicate amongst themselves; this communication is essential to forming complex societal structures. Leaf cutters build nests as large as football fields. Termites build mounds that are true engineering marvels—some of them can be as high as 9 feet (3m) above ground. Scientists have documented the sophisticated methods termites use to regulate the environment inside these mounds. What is amazing is that the mound has an elaborate ventilation system that enables the internal area to have carbon dioxide and humidity levels that exceed that of the outside air. This ventilation system also helps maintain the temperature at an optimal level to allow the fungus to flourish. Ambrosia beetles bore tunnels deep into tree branches. As they bore, they push out the dust into small protrusions. The tunnels typically number in the hundreds and form large networks known as galleries.

The parallels with human farmers do not end with agriculture. There are species of ants that herd aphids in much the same way humans herd cattle and live on the sugary excretions of the aphids.

Why do they farm?

Why these animals farm is a highly debated topic in the scientific community. In my opinion, these are likely to be highly evolved symbiotic relationships. Symbiosis—two or more organisms living together such that both are more successful within the partnership than they would have been if they were living on their own—originated as a survival method 400 million years ago in the form of lichens. Interestingly, one of the components of the symbiosis we know as lichens is a fungus and the other is algae. I would hypothesize that scientists may one day discover that some other species also practice fungiculture. —Rajagopal Sukumar

Guest author Rajagopal Sukumar lives in Chennai, India and serves as the Chief Knowledge Officer (CKO) of a software consulting company that specializes in the global delivery model. You can read his personal blog at www.sastwingees.org.

After this article was published, a reader pointed out that spotted jellyfish also farm algae.

You can read a great deal more about animal farmers in general in The First Farmers by Susan Lumpkin and Stephanie Hsia on the Smithsonian National Zoological Park’s Zoogoer site or Fungi and Insect Symbiosis at the University of Hawaii at Manoa.

For more about leaf cutter ants, see Leaf Cutter Ants by Joe Kissell on ITotD. The agricultural pathology of ant fungus gardens by Cameron R. Currie, Ulrich G. Mueller and David Malloch is also a must-read for this topic. This paper also gives an excellent set of references for further research. For more information on Pheromones, see Alphabet of the Ants by James W. Keefer.

Termites’ construction techniques are covered in Tribute to the termites by Gerald Marewo.