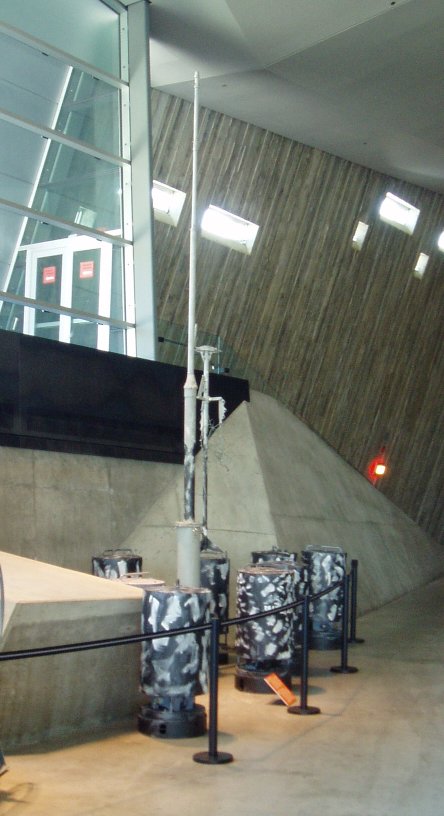 My “geek” gene has manifested itself in many different ways over the years—I’ve gone through phases of obsessions with gadgets of many kinds. For a while it was cooking gadgets; before that it was computers; earlier, it was synthesizers; still earlier, photographic equipment—and so on, going all the way back to Erector Sets. Somewhere along the way, in my early teens or so, I had a brief flirtation with meteorological equipment. I received a home weather station kit as a gift one year and set about building my own barometer, sling hygrometer, anemometer, and weather vane. The latter two devices, once assembled, had to be mounted on the roof and wired up to an indoor readout to display wind speed and direction, but that operation turned out to be excessively complicated and thus never happened. Since those were also the geekiest of the gadgets, my inability to use them quickly shut down my interest in the whole subject. The equipment I’d built lay unused in a closet for years before I finally threw it out.

Around that same time (this would have been the early 1980s), a similar collection of equipment was found in a secluded location on the east coast of Canada. It, too, had been abandoned for years. But in this case, it had been built and installed secretly by the German military nearly 40 years earlier as part of an elaborate remote weather-forecasting system in the North Atlantic.

During World War II, German submarines, known as U-boats, kept busy blowing up allied ships in the Atlantic—particularly those bound for Europe with supplies from North America. The U-boats’ operations had to be planned carefully and were in part dependent on weather conditions. In order to get the best data about weather systems approaching from the west, the Nazis devised an elaborate network of 21 automated weather stations that were to be installed in secret locations all across the North Atlantic, from Norway to Greenland to Canada. The stations, designed by Siemens (a German company that still makes electronics and appliances), collected readings of temperature, humidity, barometric pressure, wind direction, and wind velocity. They translated this data into Morse code and broadcast it, every few hours or so, via shortwave. The stations were powered by large banks of batteries that were expected to last about three months. Bearing in mind that this was long before the advent of digital computers, I can’t help but be impressed at the clever engineering that went into these stations, their purpose notwithstanding.

Two of the stations were destined for Canada. One of these was station WFL-26, code-named “Kurt.” On October 22, 1943, U-537 arrived in Martin Bay, Labrador. Its crew waited for fog to set in, and then surfaced and quickly ferried 10 large canisters full of parts to shore. On a hill about 300 meters inland, they set up the equipment, which had been labeled as property of the nonexistent “Canadian Weather Service.” They even left empty American cigarette packages lying around to further divert suspicion. Less than 24 hours later, after confirming that the station was broadcasting correctly, the U-boat snuck away. (The sub carrying the second weather station to Labrador the following year was sunk before it reached its destination.)

Soon after U-537 departed, however, something went wrong with Kurt. According to some reports, the station went mysteriously silent after a few days, or perhaps as long as two weeks. Other reports say the station continued to broadcast, but that its transmissions were jammed. Intriguingly, the Americans and Canadians apparently never picked up any of the signals, so the culprit may actually have been a German jamming station. In any case, the Germans got little if any useful data from the station, and having been known to very few people in the first place, it was soon forgotten.

In 1980, a retired engineer from Siemens named Franz Selinger was working on a history of the German weather service. He knew of the existence of the automated weather stations, but could not determine where Kurt had been installed or what had become of it. After extensive research, he determined that it must have been set up in Labrador, so he contacted the Canadian authorities for assistance. In 1981, Selinger, with the help of the Canadian Coast Guard, located the remains of the weather station. Although some of the equipment had disappeared, the parts remaining had clearly belonged to Kurt. The station’s career had been brief, but it succeeded in staying a secret for almost four decades. What’s left of the station is now on display at the Canadian War Museum in Ottawa, Ontario.

Note: This is an updated version of an article that originally appeared on Interesting Thing of the Day on March 27, 2005.