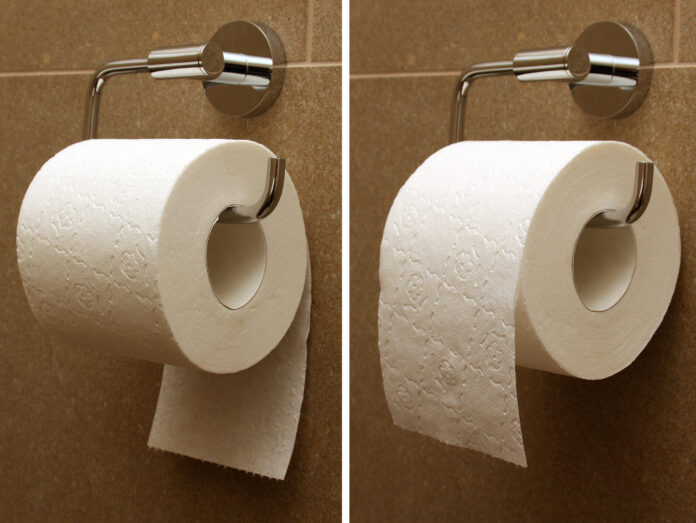 For as long as I can remember, there’s been an ongoing conflict in my family regarding the complex moral issue of whether toilet paper (and paper towels) should be installed in a dispenser so that it rolls over or under. Some family members feel very strongly about one orientation; others feel equally strongly about the other. So whenever someone visits a relative’s house where the paper is rolling the “wrong” way, they’ll change it—prompting considerable ire from whoever lives there. Me? I’m agnostic. I roll both ways. I suppose if someone twisted my arm and demanded a decision, I’d side with the “over” camp, but it’s just not something I can get terribly worked up about.

I’ve read lots of newspaper and magazine articles about this debate over the years, and I think the issues have been explored adequately elsewhere. What I have not, however, read enough about is how toilet paper (in the form in which we now know it) came to exist in the first place. For most of us in the modern western world, toilet paper is such a basic necessity of life that we simply can’t conceive of how we would function without it. But in fact, it’s not that old—and it has a rather interesting history. This is, I realize, a rather delicate topic, but one well worth a few minutes of consideration.

Before toilet paper came into widespread use in the late 19th and early 20th centuries—yes, that recently!—personal hygiene was typically performed using materials that were a bit less soft and absorbent. Newspapers, catalogs, and similar reading materials were as likely as they are now to appear in bathrooms, but much less likely to leave the room (or outhouse, as the case may be) intact. Further back in history (or when paper was otherwise unavailable), such items as rags, leaves, and even stones were used. The ancient Romans reportedly used sponges on sticks.

Perhaps as far back as the sixth century CE, paper was sometimes used for sanitary purposes in China—at least among the wealthy. In the late 14th century, toilet paper of a sort was made for the Chinese emperor—in large, 2 foot-by-3 foot (0.6 x 0.9m) sheets. But almost 300 years after the invention of the flush toilet in 1596, there was still no such thing as commercially produced paper designed exclusively as a toilet accessory—and certainly no paper that could safely be flushed.

When it comes to the origin of what we would today recognize as toilet paper, the historical accounts are hopelessly inconsistent. (The web, of course, is of little help, since—as usual—most accounts are plagiarized.) Here are what I believe to be the verifiable facts:

The biggest uncertainty in this timeline is whether the Scott brothers or the A.P.W. Company can lay claim to the first sale of the ubiquitous perforated roll. (Some sources, incidentally, claim that Scott didn’t begin selling rolled toilet paper until 1890—but also claim they were the first to do so.) In any case, by the early 1900s—at which time, not coincidentally, flush toilets began to achieve popularity—toilet paper as we now know it was easily found in both the United States and Europe. And in the 1990s, history came full circle (so to speak) as several major toilet paper manufacturers began offering their latest “innovation”—toilet paper treated with aloe. Progress rolls on.

Note: This is an updated version of an article that originally appeared on Interesting Thing of the Day on May 7, 2005.