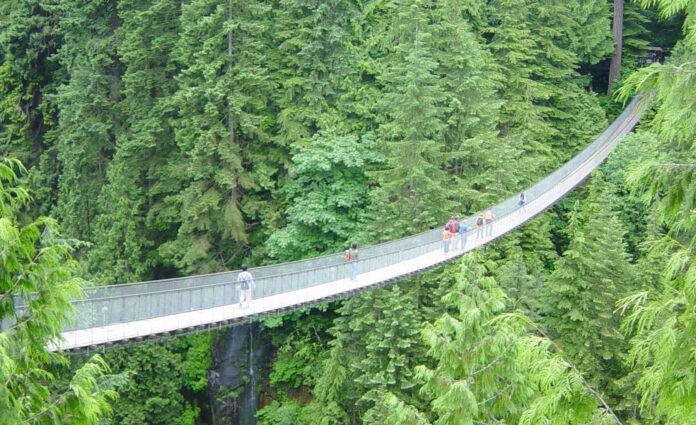 Every time I mention to someone that I spent three years living in Vancouver, British Columbia, I get the same response. “Oh, I’ve heard Vancouver is such a beautiful city. I’d love to visit there some time.” Dozens of people have said the same thing to me, almost as if reciting a line from an advertising campaign. And it’s true: Vancouver is a beautiful city—whether you’re talking about the mountains, forests, and ocean or the glistening modern skyline of glass skyscrapers. There’s a reason so many films and TV shows are shot on location in and around Vancouver. If it’s scenery you want, this is the place. Vancouver, like any other large Canadian city, also has plenty of cultural depth—an excellent symphony orchestra, live theater, cinema, folk music, improv comedy, professional sports, and museums of every kind. There are major universities, large industries, and rich natural resources, not to mention a vibrant multi-ethnic population. And, it was the location of the 2010 winter Olympics. In short, no one needs an excuse to visit Vancouver. There are so many things to do and see there that it’s a compelling tourist destination.

The Draw of the Bridge

Having said that, I was shocked and baffled to learn that the most popular tourist attraction in the city—nay, in the entire province—is a footbridge. Incredible but true: each year over 800,000 people pay a healthy sum to walk across the Capilano Suspension Bridge. Now, it is indeed quite a nice bridge, as suspension footbridges go. Strung high above the scenic Capilano River, it offers a lovely view. And it’s an impressive feat of engineering too (about which more in a moment). But of all the things that might attract a visitor to the southwestern corner of mainland British Columbia, the enormous appeal of this bridge has always seemed quite strange to me.

The current Capilano Suspension Bridge is actually the third such structure at this location. The first bridge, made of hemp rope and cedar planks, was installed in 1888 by land developer George Grant Mackay, who had purchased acreage on both sides of the river and needed a convenient way to get to and from his cabin. In 1903, the bridge was replaced with a wire cable bridge, which was then reinforced significantly in 1914. The current bridge was installed in 1956, with the heavy cables encased in 13 tons of concrete on each end. Over the course of the 20th century, ownership of the property changed hands several times, but it has always been more of a tourist attraction than a means of getting from place to place. The surrounding area has been developed as a park, with a restaurant, gift shop, and a collection of native totem poles to give it character—plus a cantilevered walkway called the Cliffwalk, which opened in 2011, among other attractions. But you walk across the bridge solely for the experience of doing so—there’s no other point.

The Capilano Suspension Bridge is 450 feet (137m) long and 230 feet (70m) above the canyon floor. Because it hangs freely between the supports on either end, it sways and bounces as you walk across it. This gives the illusion that it’s risky, but the bridge has been designed for complete safety. The most impressive feature of the bridge is visible only on paper: its incredible capacity.

How much weight can the bridge support? Apparently the number of pounds (or kilograms) is so high that it can be expressed only in metaphorical terms. I’ve read literature claiming the bridge can support the weight of fifty 747s or ten “heavy-duty military fighter planes,” each of which, presumably, is five times the weight of a 747—depending on the exchange rate and whether the plane is actually in flight. I think those statistics are wrong, however, because the bridge’s official website says it can hold “up to 96 full grown elephants,” which according to my back-of-the-envelope calculation works out to only about three 747s (give or take, depending on whether you’re talking about African or Asian elements, and whether they’re male or female). Whether you measure in pounds, airplanes, or elephants, these statistics are intended to reassure tourists that the bridge can definitely hold far more people than can fit on it at any given time and that they, their children, and their cameras are perfectly safe.

I’m tempted to say that the Capilano Suspension Bridge is a textbook example of overengineering, like using a rivet where a paperclip would do. But whether its great strength is excessive or not, its marketing program certainly is. I’ve been to the bridge several times, because it’s one of those things you just have to take friends and relatives to when they visit from out of town. And the reactions are predictable: “Wow, this is cool,” followed shortly thereafter by, “Is this all there is? I paid how much for this?” And I can’t help keep thinking of the Golden Gate Bridge in San Francisco, which is many times more impressive and doesn’t even come close to being the city’s top tourist attraction, never mind the state’s.

As a couple of Vancouverites pointed out to me, there’s another similar bridge not far away, called the Lynn Canyon Suspension Bridge. In addition to being free, and, I’m told, “just as nice as the Capilano bridge,” the Lynn Canyon bridge leads to some of the best walking trails in the area. But then, the real reason people visit the Capilano Suspension Bridge is to find out what all the fuss is about. And that is exactly what I find so interesting about it: the bridge to nowhere has become, for its owners, the path to fortune.

Note: This is an updated version of an article that originally appeared on Interesting Thing of the Day on August 5, 2003, and again in a slightly revised form on June 27, 2004.