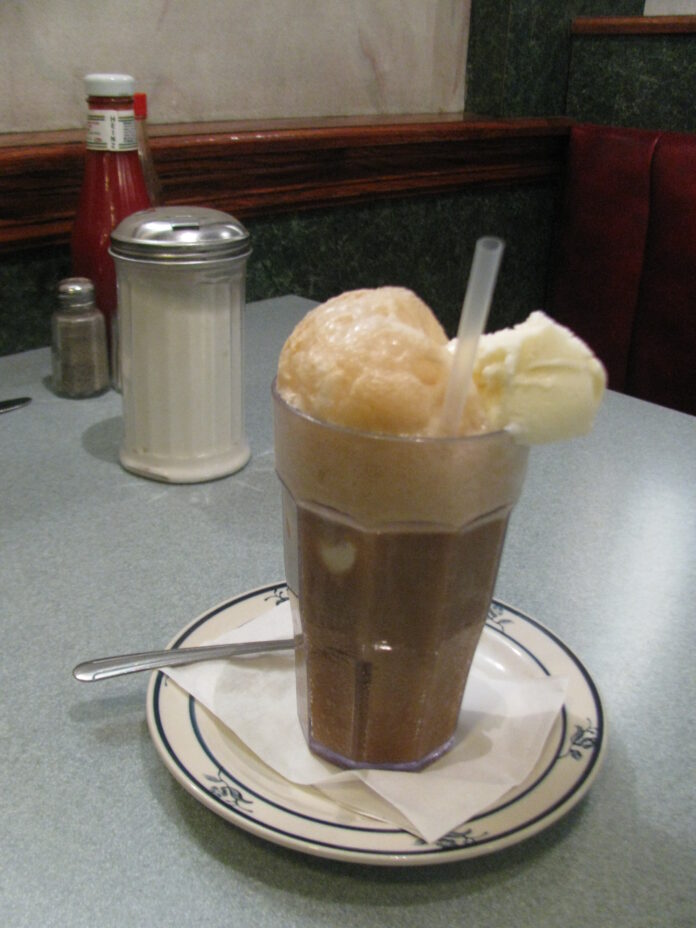 Today is National Root Beer Float Day, so do the right thing and add a scoop of ice cream (vanilla is traditional) to a large glass of root beer and enjoy. (If you happen to live near an A&W location, you can get a root beer float there today for free from 2 p.m. to 8 p.m.)

But I must interject a story. Regular readers of Interesting Thing of the Day will be well aware by now that I grew up following certain customs that were different from those of the typical American child. One of those involves the root beer float. Well, more accurately it involves the Diet Pepsi float, since that was the beverage we tended to have in the house most of the time, even though I liked root beer much more.

I loved, loved, loved floats. Had them as often as I possibly could. Except…what we called a “float” in my family would never have been made with vanilla ice cream, because we all preferred chocolate, especially varieties of chocolate ice cream with chunks, like Rocky Road and Heavenly Hash. (Pro tip: chocolate ice cream foams up more, when added to root beer, than vanilla does.) More importantly, however, the notion of actually floating the ice cream on the liquid never occurred to us. We used a milkshake blender or whatever other implement was at hand to mix the ingredients thoroughly. (Believe it or not, this is a thing in some places—for example, the Sonic restaurant chain offers “blended floats” as a menu option.) That made sense, because the blending made it possible to consume both ice cream and soda conveniently through a straw—unless of course the ice cream contained huge chunks of nuts and chocolate, which it always did. But man, those “floats” were delicious!