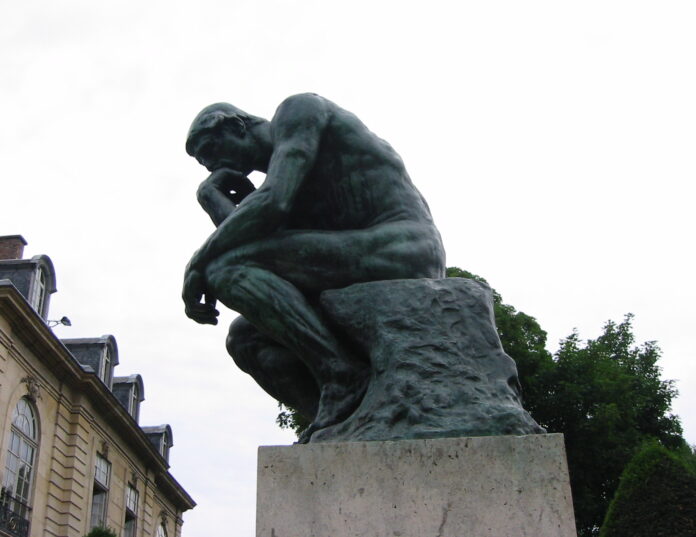 There’s no getting around it: in junior high and high school, I was a nerd. I actually wore pocket protectors. I had my digital watch synchronized to the second with the school’s clocks. I excelled at academics (especially science and math), I dreaded phys ed, and I didn’t understand sports. I was in the band, but never got elected to the student council. The few friends I had were also nerds, and we had no idea why being smart didn’t make us more popular.

One of the nerdy activities many of us overachievers participated in was Academic Games, in which students from various schools competed in tournaments of math, language, and social studies games. The best players on the best teams got to attend the national finals. The one year I went to the nationals, my team and I failed to distinguish ourselves, but we did leave with lovely T-shirts bearing the program’s logo: a picture of Rodin’s sculpture The Thinker. That was my favorite shirt for years, and once when I wore it to an amusement park, I had a caricature made of my head on The Thinker’s body. So I like to think that Rodin and I go way back.

On a visit to the Orsay museum in Paris, I saw a casting of Rodin’s monumental work, the Gates of Hell. This enormous bronze sculpture features hundreds of three-dimensional figures arranged on and around two doors. According to the placard nearby, the Gates of Hell was inspired by Inferno, the first book in Italian poet Dante Alighieri’s epic trilogy The Divine Comedy. So, of course, all these folks are depicted in a variety of anguished poses. And there at the top, in miniature, is The Thinker, looking down at the spectacle below. The first time I saw this sculpture, I thought, “Oh, that’s what The Thinker is thinking about,” which seemed like a fascinating revelation. However, that first impression was largely inaccurate. There’s much more to The Thinker than meets the eye.

In 1880, the French government commissioned 40-year-old sculptor Auguste Rodin to create a grand entrance for the planned Museum of Decorative Arts. Rodin was quite fond of Dante’s poetry, and decided almost immediately that the entrance to the museum should depict characters from the Inferno. The specifics, however, took a long time to evolve. After a couple of years and hundreds of sketches, Rodin had created models of many characters that would later appear in the finished piece—including The Thinker. At that time, Rodin intended the figure to represent Dante himself, pondering the poem that had been brought to life before him; accordingly, Rodin referred to the figure as The Poet and began to call the entire sculpture the Gates of Hell.

Thinking On His Own

Over time, however, the individual figures took on lives of their own, as more and more of those smaller studies became independent works. Rodin’s vision for the overall piece began to stray ever further from the poem, and his plan for the final set of characters changed constantly. When he realized that The Poet would become a large, stand-alone piece outside the context of the Gates of Hell, he renamed it The Thinker. Meanwhile, though the museum for which the Gates of Hell was to have been the entrance never got built, Rodin continued working on his sculpture off and on until his death in 1917. The Gates of Hell, which Rodin never considered finished, was not cast in his lifetime.

There are now a total of 25 castings of The Thinker in its largest size (and many, many smaller ones)—not to mention the various posthumous castings of the Gates of Hell. Because Rodin created the plaster molds, all can be considered equally “authentic” and “original.” But one of the 10 castings of The Thinker made during Rodin’s lifetime sits atop his tomb in Meudon, a Paris suburb. What is The Thinker really thinking about? Perhaps he’s pondering his creator’s eternal reward.

Note: This is an updated version of an article that originally appeared on Interesting Thing of the Day on January 18, 2005.