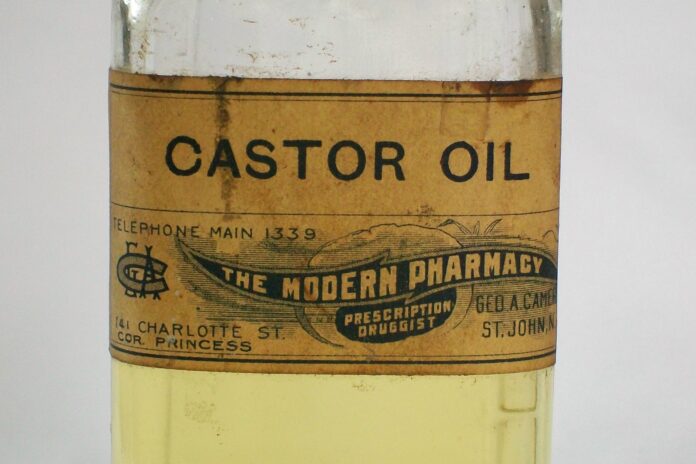 I have never had the pleasure (or displeasure) of ingesting castor oil. As a kid, though, I remember watching reruns of The Little Rascals, in which castor oil was used from time to time, and I have a vague recollection that my grandmother may have had an old bottle sitting around somewhere. Whenever I heard castor oil mentioned, comedically or otherwise, it seemed to have a threat attached to it: “If you’re not good, I’ll give you a spoonful of castor oil.” Oddly enough, this threat even seemed to be present when a child was apparently sick: “If you don’t get better, we’re going to have to give you some castor oil.” In other words, this stuff was seemingly so awful it could scare you into recovery, though I never quite grasped why that was. Presumably it tasted bad, but then, so did cough syrup. How terrible could a spoonful of anything be? And apart from tasting bad, what exactly was castor oil supposed to do?

The short answer is that castor oil is a strong laxative—and presumably, cleansing the bowels in such a forceful manner could serve either a beneficial or a punitive purpose. But then, if it’s a laxative you’re after, there are less obnoxious potions, such as prune juice or even oatmeal. The taste itself, apparently, was supposed to build character. Castor oil is also known to induce vomiting—again, occasionally a medically useful thing, though more often, a symptom one would wish to be cured of.

It turns out that there’s much more to castor oil—both good and bad—than Grandma ever suspected.

Castor oil comes from the seed of a plant called Ricinus communis, which grows in most parts of the world. The seeds are commonly known as “castor beans” because they look like beans, though the name Ricinus is Latin for a type of tick, which the seed also resembles. To obtain castor oil, one can simply remove the hulls of the seeds and cold-press them.

The oil is extremely versatile. Castor oil is used in the production of plastics, soaps, textiles, paints, cosmetics, inks and dyes, adhesives, lubricants, polishes, and numerous other products. It’s also sometimes used to induce labor in pregnant women, though from what I’ve read, its effectiveness in such cases is somewhat in doubt. It can be applied topically as an arthritis remedy, and it’s an ingredient in some eye drops used to treat dry eyes. But only a tiny percentage of the oil is sold for any sort of medicinal use—and only a tiny percentage of that is ever actually used as a purgative or emetic. Although it’s very effective at causing the digestive system to discharge its contents (from whichever end), its unpleasant taste has made its use quite rare these days, and there are of course far more agreeable alternatives.

Mussolini famously used castor oil as a weapon of sorts against political dissidents in Italy in the 1920s. Fascist operatives would capture their opponents and force-feed them a large quantity of castor oil. This produced severe diarrhea—in some cases, severe enough to cause death. (When the explicit goal was to murder someone rather than scare them, a little gasoline was mixed into the castor oil for good measure.)

But the humble castor plant can in fact do much worse. The residue left over after pressing castor seeds contains about 5% ricin, an astonishingly toxic poison (as Breaking Bad fans know). How toxic? Well, I’ve read that it’s twice as poisonous as cobra venom, 6,000 times as poisonous as cyanide, and 12,000 times as poisonous as rattlesnake venom. A dose as small as the weight of a single grain of salt can be lethal to an adult human. And it’s even more deadly when inhaled than when ingested. In other words, it’s really not something you want to mess with, especially since there’s no antidote. Ricin has been used in the production of chemical weapons, and although it’s not as toxic as some such agents, it’s extremely hard to control, as the plants can grow nearly anywhere and extraction of the poison is relatively simple. (For that matter, simply consuming a few of the raw seeds can kill you.)

All this, of course, leads one to wonder whether there might not potentially be tiny amounts of ricin in castor oil. I’ve read conflicting statements—some sources say no, pure castor oil contains no ricin at all; others say it contains some, but it’s such a minuscule amount that it wouldn’t hurt anyone. For some reason, I don’t find that terribly comforting. All in all, it’s a good argument to stick with that high-fiber diet, and if I really need an awful-tasting laxative, I’ll spike my prune juice with vodka. (I did actually make a prune juice cocktail once, just out of curiosity. It was disgusting. Maybe I should have added a packet of Stevia. Hmmm.)

Note: This is an updated version of an article that originally appeared on Interesting Thing of the Day on April 15, 2005.