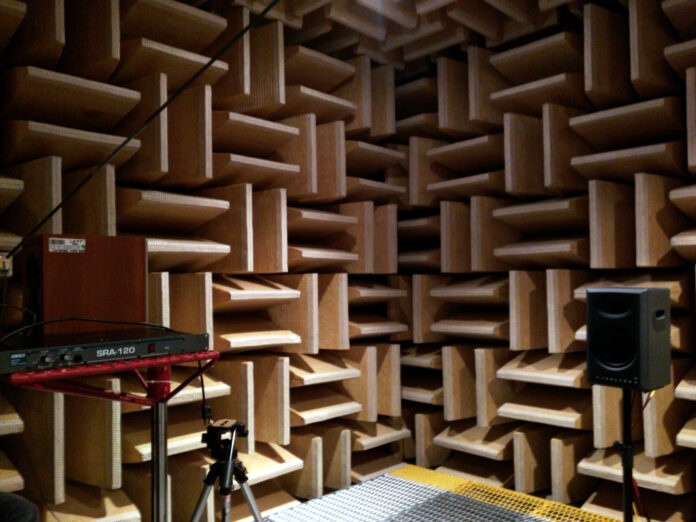 When I record videos or podcasts in my home office, I have to make do with imperfect acoustics. I can’t block out all noise from the street (or even elsewhere in the house), and I also have to deal with a certain amount of reflected sound from within the room. But I’ve lived in places where the acoustics were much worse, and my current setup is adequate for my modest needs.

Recording studios, by contrast, are explicitly designed both to keep outside sounds from being heard inside the room and to keep sounds generated inside the room from bouncing around enough to be picked up by the microphones. However, they’re still far from soundproof or acoustically “dead.” A noisy motorcycle or heavy truck coming down the road outside might still be heard inside, and the surfaces inside the room still reflect a bit of sound.

Is There an Echo in Here?

If you’re recording a song, these minor imperfections in the room’s acoustic quality are no big deal. But if you’re trying to perform delicate, highly accurate measurements of the dynamic response of a microphone or the frequency range of a speaker, any reflections or unintended sounds at all can invalidate your tests. So you need a heavier-duty soundproof environment than a recording studio: you need an anechoic chamber.

The word “anechoic” means, as you might guess, “without echoes.” Naturally, an ordinary room is going to reflect sound less than a canyon or a concert hall, but making a room completely immune to sound reflections is surprisingly difficult. The first step is to consider the angles of the surfaces in a room. Flat, hard surfaces reflect sound best, and when you have more than one such surface—especially when they’re parallel—you’re guaranteed to have some sort of echo. Then you have to consider the composition of the walls, floor, and ceiling. A given material (such as blankets hanging on a wall) may absorb certain frequencies of sound effectively, while reflecting higher or lower frequencies. In addition, sound volume comes into play: materials that absorb relatively quiet sounds may nevertheless partially reflect louder sounds.

So most anechoic chambers have all their interior surfaces lined with thick wedges of fiberglass (or in some cases polyurethane) foam. The wedge shape traps sound waves by reflecting them onto another part of the wedge rather than back into the room. The foam itself then absorbs the vibrations (turning them into heat). The deeper the wedges are, the lower the frequencies of sound that can be absorbed. To absorb all sounds within the range of human hearing requires immense wedges, shrinking the interior space of the room and adding to its cost. Meanwhile, it’s equally important to prevent sounds from the outside from entering the room. The walls themselves (behind the foam wedges) must be quite dense and thick; in addition, anechoic chambers are generally isolated from the rest of the building by “floating” them on a set of large springs.

The Cone of Silence

I’ve never been inside an anechoic chamber myself, but my friend Darren has. Darren is a record producer, and he once visited an anechoic chamber used for testing microphones at the Peavey Electronics headquarters in Meridian, Mississippi. Darren described the experience as being just like walking into Cerebro, the psychic amplifier created by Professor Xavier in the X-Men comics and movies. Because the floor, ceiling, and even the door of an anechoic chamber must be kept as free as possible of reflective surfaces, the working area was a small stage suspended in the very center of the room, accessed by a long walkway. The walkway and stage included handrails because people inside the chamber frequently become disoriented. Although we are not normally conscious of it, the tiny reverberations from sounds hitting the walls, floor, and ceiling of ordinary rooms are picked up by the inner ear and used to enhance our sense of balance. Without these cues, it’s harder to know which way is up.

Darren said the utter silence in the room was incredibly strange. Because there was no ambient noise at all, the smallest sounds—a whisper, the sound of breathing, or even a shoelace flapping—seemed astonishingly loud. But the important thing for the technicians testing audio equipment in the chamber is that if they’re measuring the sensitivity of a microphone or the output of a speaker, they can be certain that only the sounds they deliberately generate inside the room have an effect on their test equipment.

Other Other Echoes Echoes

Although anechoic chambers were originally designed as places free of sound echoes, the term “anechoic chamber” is also used to describe a type of room specially designed and shielded to prevent the reflection of radio waves and other electromagnetic radiation. Manufacturers use such chambers for testing antennas, radar equipment, and other electronic devices that produce radio waves, to ensure that their measurements do not include any reflected signals. The materials and designs used to prevent the reflection of radio waves are different from those used in conventional anechoic chambers, but the basic principle is the same: absorb, don’t reflect. Interestingly, though, some anechoic chambers designed for electronics actually have surfaces that reflect sound quite well.

Being a city dweller, I’m accustomed to a certain amount of background noise 24 hours a day. At the same time, I can do without the more obnoxious sounds of traffic, loud music, shouting, sirens, and so on. Even though the absolute silence of an anechoic chamber sounds delightful for a meditative retreat, I imagine the novelty would rapidly wear off. If the sound of my own breathing became distracting, I may be on my way to a padded room of another kind.

Note: This is an updated version of an article that originally appeared on Interesting Thing of the Day on October 15, 2004.