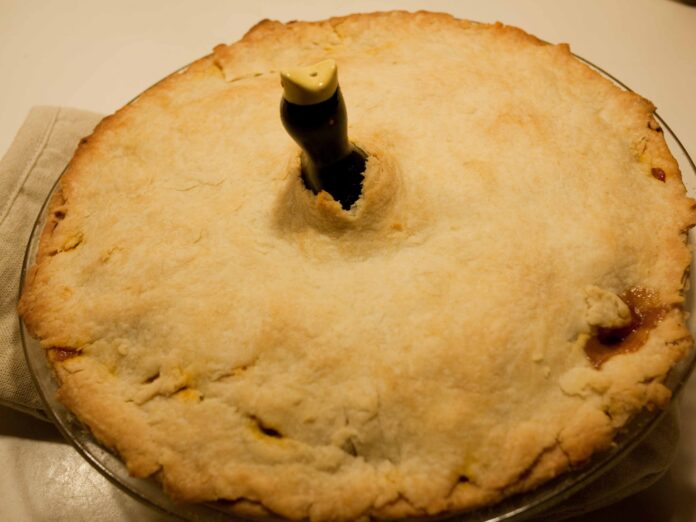 Cherry pie has always been one of my favorite desserts, and this preference was only reinforced by my repeated viewings of Twin Peaks. Years ago I had the pleasure of meeting Pat Cokewell, erstwhile owner of the Mar T Cafe (now called Twede’s) in North Bend, Washington. The Mar T achieved fame as the “RR Diner” on Twin Peaks, and it was Pat’s cherry pies that inspired director David Lynch to make the diner (and the pies) a central feature of the show. The cherry pies Pat bakes are indeed unimpeachable (and I’m sure even her peach pies are excellent). After sampling them I decided to teach myself how to bake cherry pies, and while I can’t yet claim to match Pat’s expertise, I’ve done OK.

The Crust of the Matter

The crust, of course, is the trickiest part of the pie to master, and I’ve messed up more than a few. In the course of my pie experiments, I’ve accumulated a pretty thorough collection of pie paraphernalia—a variety of pie pans, weights that are used to hold down a crust when baking it “blind” (without a filling), the special metal guards you put over the edges to keep them from burning, and so on. I considered myself quite well versed in the apparatus of pie-making until my wife came back from a trip to a large kitchen store with a shocking discovery: there was a Pie Thing I didn’t yet have, and indeed had never even heard of. It’s called a pie funnel.

My first thought upon hearing the term “pie funnel” was confusion at why someone would want to pour a pie into a bottle. Then I discovered that pie funnels are in fact devices designed to improve the top crust of a pie as it bakes. When you put a crust on top of your pie filling, you’re creating a sealed vessel containing a lot of moisture. As the pie bakes, some of that moisture turns to steam—and if the crust is completely sealed, the steam pressure can blow a hole through it, covering the inside of your oven. This is why lattice piecrusts were invented: not only do they look impressive, they leave plenty of holes for the steam to escape. But there’s more than one way to skin a pie.

Four and Twenty Ceramic Birds Baked in a Pie

A pie funnel is a hollow ceramic doohickey (to use a highly technical pie term) that stands a few inches high, with one or more openings near the bottom and a vent at the top—thus approximating the design of an upside-down funnel. In fact, the exact shape of a pie funnel is irrelevant; they are often made in the shape of birds (and called “pie birds”), but you can also find gnomes, chess pieces, and a variety of other designs that serve the same purpose. To use a pie funnel, you cover the bottom of the pie pan with dough as usual, place the funnel in the middle, and pour the filling around it. Then you lay on the top crust, with the pie funnel poking through and its top vent exposed; for best results, pinch the crust around the outside of the pie funnel to seal it.

As the pie bakes, the pie funnel vents steam from inside the pie, which helps to keep the crust from splitting, prevents the filling from boiling over, and serves to reduce and concentrate the juices. It also supports the top pie crust, keeping it from sagging into the filling and getting soggy. Depending on the shape of the pie funnel, you may or may not be able to remove it before slicing the pie. Either way, your pie will be a little goofy-looking, but that’s a small price to pay for an otherwise perfect crust.

Note: This is an updated version of an article that originally appeared on Interesting Thing of the Day on September 20, 2003, and again in a slightly revised form on July 27, 2004.