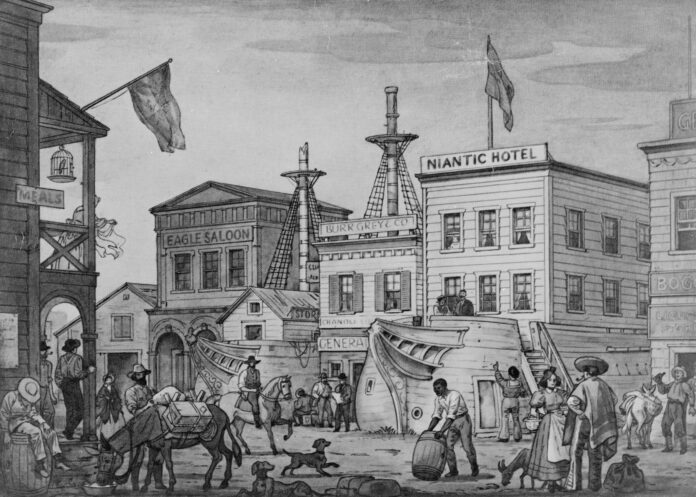 Years ago when I lived in San Francisco, I was walking down the street one day when I noticed a large brass plaque embedded in the sidewalk. It said that the spot on which I was standing was once part of the shoreline of the San Francisco Bay. I turned and looked in the direction of the Bay, from which I was at that point separated by several blocks and quite a few very large buildings. Up until that time, it had never occurred to me to doubt Jefferson Starship’s claim, “We built this city on rock and roll.” The band was from San Francisco, after all, and they should know. But thinking about this area’s significant seismic activity, I started to wonder what all these buildings were really sitting on, if not solid ground.

The trivial answer, of course, is that the ground is made up of landfill. By itself, that’s nothing unusual—especially in the Bay Area. Since the mid-1800s, the San Francisco Bay as a whole has lost 40% of its area to landfill. But in the northeast corner of San Francisco, the large, semicircular slice of land that was once called Yerba Buena Cove has a rather unusual makeup: it’s composed partly of the remains of hundreds of old ships.

I Left My Ship in San Francisco

In 1847, the small settlement of Yerba Buena, which had just recently been claimed as United States territory, changed its name to San Francisco. At that time, the town consisted of just 79 buildings and a population of less than 800. But the following year, in 1848, gold was discovered nearby, and as the area’s major port, San Francisco rapidly ballooned in size. By the end of 1849, the population had skyrocketed to 100,000, making it the largest city in California. (A few years later, incidentally, the mining town of Bodie—a few hundred miles away in the Sierra Nevada mountains—would become the state’s second-largest city. It’s now the most famous ghost town in the United States.) San Francisco soon averaged 30 new houses built—and two murders committed—each day. And a plot of San Francisco real estate that cost $16 in 1847 sold for $45,000 just 18 months later. (That trend, obviously, has continued.)

Meanwhile, many of the new arrivals in the port of San Francisco headed directly to the hills to search for gold. In fact, more than 200 ships were completely abandoned and left to rot in the Bay as their crews and passengers went off to seek their fortunes. This both caused and solved a problem. The empty ships were clogging up the harbor, while the rapidly growing downtown business area needed room to expand. So the townsfolk took matters into their own hands and decided to put the ships to good use. Some of the ships were salvaged for their wood, which came in handy as the city had to rebuild itself from no fewer than six major fires that nearly wiped it out between 1849 and 1851. Other ships were towed onto the beach and turned into buildings—a hotel, a jail, a store, or a warehouse. But quite a few of them were sunk intentionally in order to fill in the cove. In the late 1860s, what remained of the cove was enclosed by a seawall, running roughly along the path of what is now known as the Embarcadero.

Over the years, as developers have demolished old buildings and excavated sites for new ones, numerous remains of the Gold Rush ships have been unearthed. In the late 1960s, as San Francisco was building its BART subway system, discoveries of ships and ship fragments occurred regularly. Over the following decades, ships and pieces of ships appeared during several major construction projects along the shore.

For example, in 1994, construction workers digging a tunnel found a 200-foot-long (61-meter) ship 35 feet (11 meters) underground. Rather than attempt to remove the ship—which would have been both costly and dangerous—they simply tunneled right through it. When buried ships are found, they’re sometimes looted for bottles, coins, and other valuable antiques frequently found inside. Among the prizes found in the ships have been intact, sealed bottles of champagne and whiskey, nautical equipment, and a variety of personal effects from the passengers and crews. In 2001, during construction of a hotel at the corner of Battery and Clay streets, the hull of the 1840 ship General Harrison was found, and an outline of the hull on the sidewalk above now marks its location. Still another ship, eventually identified as the Candace (built in 1818), was found in 2005 under Folsom Street during excavations for a high-rise condominium building.

Every City Has Its Faults

A couple of miles northwest along the city’s shore, the Marina District is also partly built on landfill—of a somewhat different kind. After the massive 1906 earthquake destroyed most of the city, developers needed someplace to dump all the rubble from the downtown area. They used the crumbled remains of buildings to extend yet another portion of the city out into the water, helping to create the site of the Panama-Pacific International Exposition to celebrate the opening of the Panama Canal in 1915.

Landfill, of course, is not an ideal foundation for buildings in an area with lots of earthquakes—especially if that landfill is saturated with water. An earthquake can cause an effect called liquefaction, in which the ground behaves more like a liquid than a solid. Significant portions of San Francisco are prone to this effect—a major worry in the event of another serious earthquake. Builders minimize the danger when preparing for new construction by driving pilings through the landfill and into the bedrock below, though roads and smaller buildings still risk damage. In this respect, San Francisco stands in the illustrious company of Venice, which is built almost entirely on pilings…and slowly sinking into the Adriatic Sea.

Alas for the forty-niners who flocked to California, many of them searched in vain for the gold that drew them here. But had it not been for them, San Francisco would have been a much smaller city, both in population and in surface area.

Note: This is an updated version of an article that originally appeared on Interesting Thing of the Day on June 3, 2004.