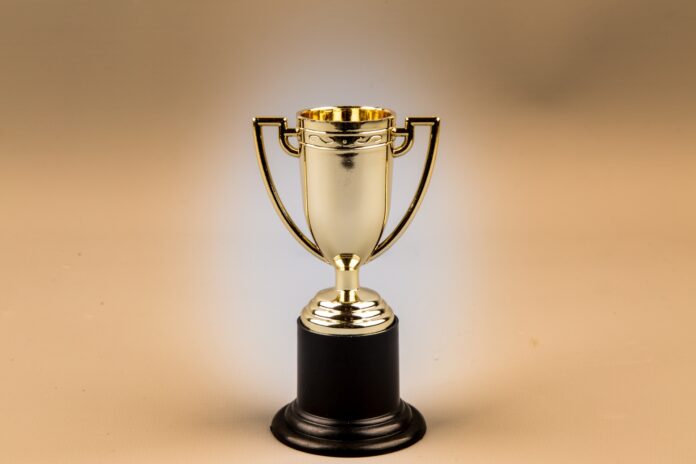 Lots of major sporting competitions award the winning team a trophy in the shape of a cup (or, if you prefer, a bowl, chalice, or goblet)—the Stanley Cup, the America’s Cup, the World Cup, and so on. Trophy cups are also found quite often in collegiate sports, and Harry Potter fans of course recognize the House Cup as the highly coveted award for the house that has accumulated the most points during a given term. Often, though not always, tradition dictates that a single trophy cup be passed from one winning team to the next. In individual competitions, by contrast, trophy cups are much less common; designs are based more often on a human (or angelic) figure of some kind.

The Salad Fork of Victory

When you’re rooting for your team to win, say, the World Cup, it’s probably not especially important to you what the actual token of victory is shaped like. The important thing, most competitors and fans would agree, is simply to win—and to have some commemorative token. A cube or sphere or an inscribed toaster oven could just as easily serve this purpose, though without a doubt, larger, more elaborate, and costlier trophies give the winner something further to brag about. So how did a cup, of all things, come to symbolize competitive victory?

The answer was surprisingly difficult to track down; indeed, even after several hours of research I can only advance a couple of plausible theories. For many centuries, a “trophy” was simply something of one’s enemy—a piece of armor, perhaps, or occasionally a body part—that was displayed after a battle as a tangible proof of triumph. This may, of course, have been a cup on occasion, but I was unable to find any examples of cups designed for the sole purpose of serving as trophies (in particular, for sporting events) until the mid-18th century. This means the inspiration for such a design must have appeared earlier than that.

For Methodists Who Love to Win

The first rabbit hole I went down traced the origin of the trophy cup to the “loving cup” designed by theologian John Wesley (1703–1781). Wesley founded the Methodist church, and part of the church’s early rituals included “love feasts”—community gatherings that included a simple meal of bread and water. Although superficially similar to Holy Communion, love feasts were simpler and were conducted by laypeople rather than clergy. Wesley’s loving cup was given two handles so that the water could be passed easily from person to person. The handles and the tradition of passing the cup fit with the trophy cup, but no direct connection appears to exist between the loving cup and trophies. Indeed, there’s evidence that cups were used as trophies well before Wesley’s time.

According to Ian Pickford (of Antiques Roadshow fame), the modern trophy cup was based on the two-handled “ox-eye” college cup design from the 17th century; essentially, as glass vessels became more commonly used for drinking, two-handled cups gradually assumed more ornamental uses. And one of those, apparently, was as a trophy. From an article on How Products Are Made:

Chalices, or two-handled cups, were given to winners of sporting events as early as at least the very late 1600s in the New World. An exquisite, small two-handled sterling cup in the Henry Ford Museum in Dearborn, Michigan, was given to the winner of a short horse race between two towns in New England about 1699 and is called the Kyp Cup (made by silversmith Jesse Kyp).

That’s a better explanation than I could come up with the first time I looked into this question in 2003, but it’s still a bit unsatisfying, in that I couldn’t determine why this particular ornamental object, rather than some other one, came to be used to symbolize winning a competition. If any trophy historians out there would like to chime in with details, I’d be all too happy to set the record straight.

Note: This is an updated version of an article that originally appeared on Interesting Thing of the Day on September 28, 2003, and again in a slightly revised form on January 1, 2005.