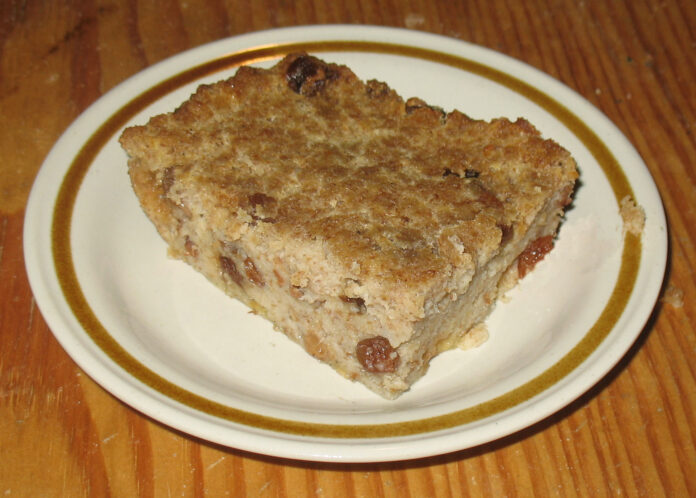 Given a menu listing a dozen dessert items, I invariably gravitate toward one of the two or three choices on the list that include chocolate as a main ingredient. I don’t think of this as a boring or predictable preference; on the contrary, life is short, and I feel one must not miss an opportunity to experience one of Earth’s great pleasures. You can imagine my feeling of disappointment, then, when at restaurant after restaurant in New Orleans, I arrived at the end of the meal only to find such chocolate-free choices as bananas Foster, pecan pie, and bread pudding on the dessert menu. Suppressing my instinct to jump up and shout, “That’s not really dessert!” I chose to give each of these local specialties a fair chance. Or several.

Truth be told, I have nothing against any of these desserts; in fact, I’m quite fond of bread pudding in particular. The only problem is that it’s extremely filling, and if you’ve just finished a Cajun or Creole meal, you are unlikely to have the tiniest space left in your stomach. With some careful planning (and belt-loosening), I was able to try several different bread pudding recipes. The variety of bread puddings surprised me; they differ greatly in density, sweetness, texture, and flavor. The only bread pudding I had ever known was a very generic (though still tasty) recipe such as you’d find at a buffet or a potluck dinner. But in New Orleans, every restaurant has its special twist, and toppings like a creamy whiskey sauce are quite common.

For those unfamiliar with this dish, bread pudding is typically made by soaking bread cubes in a mixture of milk, egg, and sugar; adding raisins and spices; and baking. So it’s not that much different from French toast, except moister and usually served in a bowl. Of course, one’s choice of bread, the addition of optional ingredients, and the details of preparation can make one bread pudding shine where another merely glows. The possibilities are endless.

Back in 2003, my friend Paola sent me an email asking if I was interested in bread pudding. (She knew the answer already: I’m interested in everything, especially if it’s dessert.) There’s a magazine all about bread pudding, she told me, and she wondered if I thought it might be sufficiently interesting to buy myself a subscription and then share it with her. You gotta love friends like that. I went to the relevant page on Amazon.com, where I found that a “subscription” to Bread Pudding Update consisted of only one issue, at a cost of US$5. That was odd, I thought, but I figured I could hardly go wrong for $5. The ad promised “a review of the myriad ways one can take leftovers and liquor to new heights” and mentioned ingredients like “brandy, sherry, bourbon…oozing caramel sauce…seasonal fresh fruits.” Good enough. I placed my order.

Several weeks later an envelope arrived via Airborne Express. It contained exactly two photocopied pages. The first page had the words “Bread Pudding Update” in large letters at the top. I couldn’t believe my eyes. The “magazine” consisted of a grand total of three bread pudding recipes and a copyright notice. No articles or commentary; not even so much as a paperclip to hold the pages together. And, by the way, no mention of liquor, caramel sauce, or fruits (seasonal, fresh, or otherwise). The magazine (wisely) came with a “no refunds or cancellations” policy, so I returned to Amazon.com and left an extremely uncomplimentary review (adding it to several others already present). Shortly thereafter, the listing for the magazine was removed, only to be replaced by another one, this time without the editorial promises—or my review. But the price had gone up to $12.95. (I guess those courier services can get expensive.)

Extending the Life of Stale Ingredients

Well, that was 15 years ago. Out of idle curiosity I just did another search on Amazon.com for “bread pudding update,” and I was a bit stunned to see a listing for a (self-published) paperback book with that title, with the author listed only as “Alfreda.” It’s 46 (large print) pages long. Using the “Look inside” feature on Amazon’s site, I learned a bit more. The copyright page says, “This is a compilation of recipes from select editions of Bread Pudding Update,” which suggests the three pages I received were just one “edition” in a series. The table of contents lists 11 recipes, plus another 10 chapters with recipe variations, suggestions for toppings and other breads, and suchlike. The few sample pages of recipes look OK as far as they go, but they’re just like the “magazine”—no pictures, history, background, or anything else to make it worth the current price of $16.95. Jeepers.

The story has a happy ending, however. Some time after my initial run-in with Bread Pudding Update, my mother mentioned to me that her mother used to make bread pudding all the time. I don’t recall ever having eaten Grandma’s bread pudding, and my mother said she doubted the recipe was ever written down before Grandma died. Not long thereafter, though, I got an email with the happy news that my mother had located Grandma’s recipe for bread pudding on the back of a card in her recipe box. And I’ll share it with you for 0% of the cost of Bread Pudding Update.

I must be perfectly frank: Grandma’s recipe is not the most inventive or exciting way to prepare bread pudding. As bread pudding recipes go, it’s fairly standard. On the other hand, it does have that homemade taste that you’ll be hard-pressed to find at a New Orleans restaurant. The recipe as found was rather terse; you’ll need to read between the lines for the details:

If you want something fancier, there are dozens of recipes on the web for New Orleans-style bread pudding with whiskey sauce. Knock yourself out.

Note: This is an updated version of an article that originally appeared on Interesting Thing of the Day on October 15, 2003, and again in a slightly revised form on February 11, 2005.