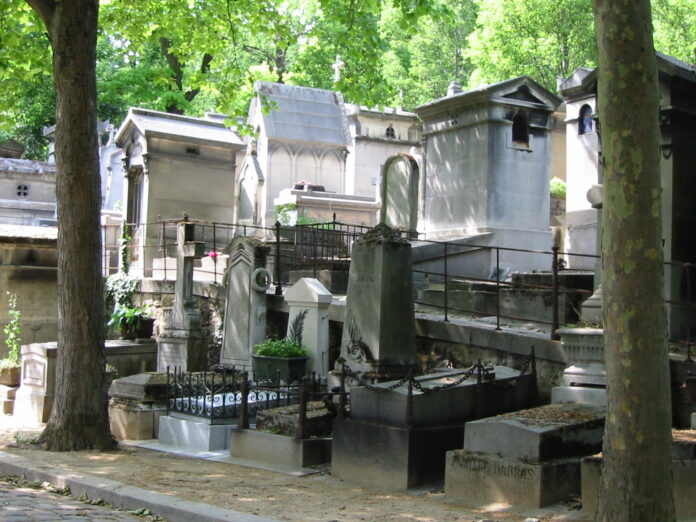 Those who follow Interesting Thing of the Day closely will by now have noticed more than a passing tendency for topics to involve decay, France, or—when possible—both at the same time. Undoubtedly some very troubling explanations could be advanced for this phenomenon, but in fact there is no sinister plot afoot, as far as I know. The old is often more interesting than the new, and as for France, well, it happens to have quite a lot of old things—as well as some truly excellent food and drink to enjoy before and after looking at them. It’s a natural destination for seekers of interesting things. Indeed, that’s a big part of why my wife and I lived there for five and a half years. And we made a point of regularly visiting one of the most famous, interesting, and quiet attractions in Paris: Père-Lachaise Cemetery.

Père-Lachaise owes its celebrity primarily to the large number of writers, musicians, politicians, and other famous people buried there. Among the cast are Frédéric Chopin, Eugène Delacroix, Marcel Proust, Gertrude Stein, and Oscar Wilde. The cemetery, which is also the largest park in Paris, has more than 70,000 plots. The sheer size, along with its hilly terrain, twisting roads, and thousands of trees, makes navigation a challenge, and those without suitable tech in their pockets can purchase maps for a few euros before entering the site (which is free to the public).

The cemetery was named after the Reverend Father François de Lachaise d’Aix, a Jesuit priest who was the confessor of King Louis XIV from 1689 until the king died in 1709. The story goes that the Jesuits had built a retreat house on the hill that was once called Champ-l’Éveque. When the king visited the area, the Jesuits, at a loss for an appropriate gift, renamed the hill Mont-Louis in his honor. The residence at Mont-Louis was later to be home to Father Lachaise, and the entire hill eventually took on the priest’s name.

The site was first used as a cemetery in 1804, but after three years, there had been only 106 burials. At the time, the cemetery was an inconveniently long distance from the center of town, and Parisians did not want to walk so far during funeral processions. While corpses were piling up in the city, the directors of the cemetery were concerned about having enough income to make their considerable investment in the land worthwhile. Napoleon undertook a large publicity campaign on the cemetery’s behalf, part of which involved moving the remains of numerous famous people to Père-Lachaise. But his efforts had little effect and the cemetery remained underused.

Where government power failed, fiction succeeded. Honoré de Balzac wrote a number of serial novels that were published weekly in Paris gazettes. In the stories, important characters who died were buried at Père-Lachaise. So compelling were the descriptions of both the characters and the cemetery that tourists began flocking to see the real place where fictional characters were supposedly buried.

The gravesites at Père-Lachaise range from a simple, unadorned headstone to towering monuments and even elaborate mini chapels dedicated to the memory of a well-known person or family. A lot of the tombs are about the size and shape of a phone booth, with just enough space for a mourner to step inside, kneel to say a prayer, and leave some flowers. It’s a beautiful and tranquil place—full of history and death, yet somehow strangely uplifting.

Unlike, say, the Catacombs, Père-Lachaise is an active cemetery. We’ve frequently seen fresh graves, as well as funeral ceremonies in progress. The cemetery manages to squeeze an increasing number of bodies into a finite and already crowded space. One way it does this is by combining the remains of multiple family members in the same grave. In many parts of North America, such a custom is unheard of, as each body is presumed to have its own casket, vault, and plot of land. But at Père-Lachaise (as in many other places), it is not uncommon to reopen a grave after a body has decomposed and add another one. Some family (or multi-family) tombs contain dozens of bodies, often in several separate (but contiguous) graves.

Although the tombs of Père-Lachaise date back as far as 200 years, they are not all equally well maintained. Each family or estate is responsible for the upkeep of its own monuments, and while some are in excellent condition even after centuries, many have not been touched in decades. So it is very common to see tombs that have collapsed or otherwise fallen into disrepair. Often the engravings are completely worn away, making it impossible to tell who was buried there or when; maps of the cemetery show only the most famous occupants. In relatively recent times, Père-Lachaise has adopted a standard practice of issuing 30-year leases on gravesites, so that if a lease is not renewed by the family, the remains can be removed, space made for a new grave, and the overall deterioration of the cemetery minimized.

The strangest and saddest thing about Père-Lachaise Cemetery is that a huge majority of its 1.5 million annual visitors are there primarily to see Jim Morrison’s grave. Morrison was lead singer for the Doors until his inauspicious death in 1971 at the age of 27. He was found dead—apparently from heart failure due to a drug overdose—in a Paris hotel. During his brief career, he attracted an immense number of fans, and in the three decades since his death, the mystique surrounding this charismatic, rebellious rock star has led to ever more followers—many of whom weren’t even alive in 1971.

We saw the grave on our first visit to the cemetery and felt no need to see it again—it is one of the simplest markers in the entire cemetery, though it’s frequently adorned with flowers, candles, gin bottles, and graffiti. A security guard is usually nearby to discourage visitors from defacing Morrison’s grave (or others); this has been a tremendous problem in the past, and has caused considerable grief for the families of other people buried nearby. Because of the prevalence of 30-year leases on grave sites, there was great speculation some years ago that Morrison’s remains might be moved elsewhere, and clearly that would have pleased a great many Parisians. However, Morrison’s grave has a perpetual lease, and as far as anyone knows, his bones will remain at Père-Lachaise permanently.

As we were getting ready to leave the cemetery on another visit, having agreed that there was no reason to visit Morrison’s grave, a twenty-something American girl stopped us and said, “Excuse me, but do you know where Jim is?” Alas, we did—as did everyone else. We pointed out the spot on our map. And I couldn’t help thinking: another pilgrim seeking the real location of a kind of fiction—history repeats itself.

Note: This is an updated version of an article that originally appeared on Interesting Thing of the Day on June 16, 2003, and again in a slightly revised form on March 15, 2005.