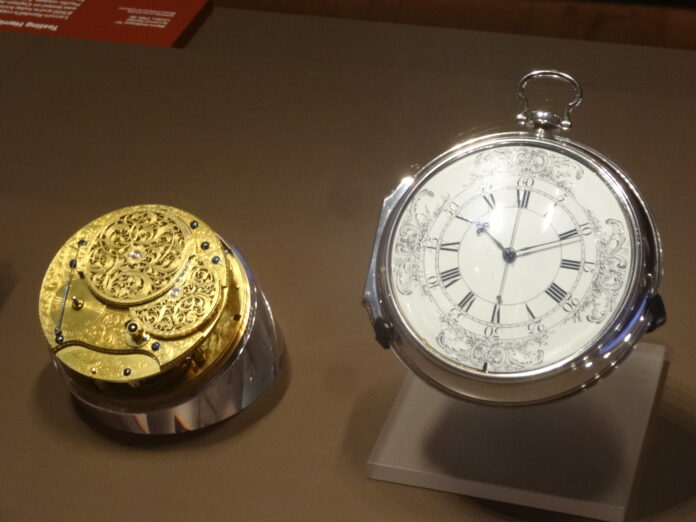 It’s the late 1700s and you’re on a ship that’s lost in the middle of the ocean—nothing but water from horizon to horizon, day after day. What’s your most valuable asset? Yes, of course, water and food, but I mean besides that. Would you believe…a pocket watch? Neither would some of Britain’s most eminent scientists at the time, but it was indeed a watch of sorts that held the key to a maritime problem that had frustrated sailors for centuries—sometimes with deadly results—and which many people believed was simply impossible to solve. That problem was how to determine one’s longitude on a ship.

Turn Left at the Third Wave

Nothing could be more important to a captain than knowing the ship’s location, but without landmarks, this was an amazingly difficult puzzle a couple of centuries ago. There were compasses, of course, which could tell you which direction you’re heading. One could judge latitude with reasonable accuracy by measuring the angle between the sun and the horizon—at least if the sun was out and the ship wasn’t rocking too severely. And, by tossing a weighted rope off the ship and counting how many knots passed through one’s hands in a given period of time, a rough estimate of speed could be obtained. But it’s of limited value to know that you’re traveling southeast at 7 knots, 50° north of the equator, if you have no idea whether you’re closer to Newfoundland or Ireland. And even with rigorous recordkeeping, excellent charts, and detailed knowledge of ocean currents, the equipment available at that time made it impossible to judge east-west position with anything approaching accuracy; the sun simply can’t tell you that, because the planet is rotating.

There being no apparent solution to the problem, mariners simply lived with this frustration. But on a foggy day in 1707, four large British warships returning from France misjudged their longitude and ran aground on the Scilly Islands off the southwest tip of England. The ships all sank, and more than 2,000 men died. As a result, in 1714, the British government offered a huge cash prize (£20,000—equivalent to millions of pounds or dollars in today’s money) to the first person who could devise a way of accurately measuring longitude at sea. It was the 18th century equivalent of the X Prize, and the nation’s brightest and best set to work inventing solutions of all kinds.

The key, as everyone realized, was being able to tell what time it is—both at one’s current location and at some other point on the planet (say, Greenwich). Because the speed of the planet’s rotation is known (about 15° per hour), if you know what time it is at a given longitude, you can take the time at your location, do some simple math, and end up with your position. That sounds straightforward enough, but it meant that you’d have to have with you, on a journey that may last weeks or months, a clock that accurately told you the time back home. The problem was that most clocks were extremely inaccurate—gaining or losing a minute or more each day—and even then, they were based on delicate mechanisms (such as pendulums) that would be thrown completely out of kilter on a rocking ship. A few days out of port, even if you could ascertain the time at your current location accurately (based on the sun’s position), your reference clock would be worthless.

In the quest to solve the timekeeping problem, the most popular approach, by far, involved star charts. The idea was that the relationship between the moon and various stars was unique for each time of each day, so if you could make careful observations at night and correlate those observations with a set of tables, you could tell with precision what time it is—or was, a few hours ago, when you began making your calculations. Apart from the difficulty of cataloging all that data usefully, though, this approach assumed that the observer would have clear skies and a steady observation point—both difficult to guarantee on the high seas.

Time for a Solution

Meanwhile, an unknown clock maker named John Harrison was busy on a completely different approach: constructing a clock that was far more accurate than any available at the time and capable of maintaining that accuracy even after weeks of being tossed around on a ship. In the course of his experiments, Harrison came up with many innovative technologies that have since found their way into not only clocks but also a variety of other machines, such as the caged roller bearing and a bimetallic pendulum to compensate for temperature changes. But putting them all together into the perfect clock was a very long process. His first prototype, which he called H1, took five years to build. It was, at the time, possibly the most accurate timekeeping device in existence, but still not good enough to win Harrison the prize.

Over the next 20 years or so, Harrison worked on improved designs—H2 and H3—but abandoned each when he realized it would not ultimately work. However, while working on H3, Harrison had asked another watchmaker to build him a pocket watch to his specifications. Although pocket watches were not taken seriously at the time, Harrison’s design turned out to be fantastically accurate. This convinced him that his next step, H4, should be based on the design of a pocket watch rather than on a larger clock mechanism. Harrison finally completed H4 in 1759 at age 66. It looked like an oversized pocket watch, with a diameter of 13cm (about 5 inches). Two years later, in 1761, Harrison’s son, William, took H4 on its official transatlantic trial.

The clock performed flawlessly (and well within the range stipulated for the prize). But the judges on the Board of Longitude—which included Isaac Newton—were convinced that no mechanical device could ever solve the longitude problem. So this success, they concluded, must have been a fluke. They demanded (and got) a second trial, which showed similar accuracy but still didn’t convince the Board. Eventually Parliament took up the matter, and agreed to give Harrison and his son half the prize money, with the other half to be delivered if other watchmakers could duplicate his design and produce the same results. Three years later, William, frustrated by the Board’s continued heel dragging, appealed to King George III, who tested H4 himself. He found it as accurate as had been claimed and, outraged that the Board had kept Harrison’s rightful winnings from him, threatened to appear personally before Parliament if they didn’t hand over the rest of the prize money. In 1773, at age 80 and after more than 40 years of work, Harrison finally received both the prize money and the recognition of having solved the longitude problem. He died three years later, on his 83rd birthday.

Today, sailors no longer need to carry an oversized pocket watch or check the angle of the sun to determine their position. But even our highest-tech navigation devices, such as GPS receivers, ultimately rely on extraordinarily accurate timekeeping. So Harrison’s solution has truly stood the test of time.

Note: This is an updated version of an article that originally appeared on Interesting Thing of the Day on April 27, 2005.