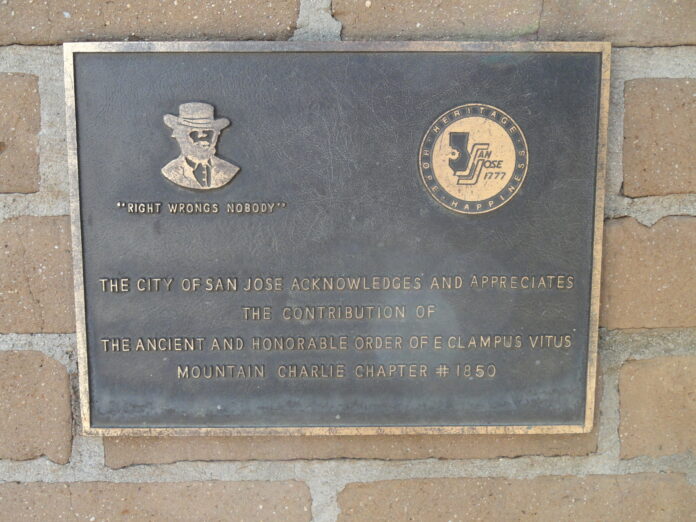 When we travel to northern California’s historic gold mining region, Morgen and I like to explore ghost towns, as well as mining towns that managed to stay alive after the gold rush. Some of these towns still have a charming 1850s feel to them, with restored buildings on the original Main Street that now house gift shops catering to tourists. One such town is Murphys, which was founded as a mining camp in 1848.

As we were strolling through the town’s business district on day, we passed a building that had a long outside wall covered with more than 80 stone and tile plaques, each supposedly honoring an important figure in California’s history. Called the E C. V. Wall of Comparative Ovations, it included relief images and brief biographies of not only doctors, engineers, and city founders, but also Mark Twain, San Francisco’s legendary Emperor Norton, saloon dancers, and a saber-toothed cat. Most of the plaques were made by artist William Gordon Huff in the 1970s, under the auspices of a fraternal organization to which he belonged called E Clampus Vitus (ECV). It’s perhaps the world’s wackiest (and least secret) “secret” society.

The Society about Nothing

E Clampus Vitus, a name that’s had numerous alternative spellings and misspellings over the years, is faux Latin; it never meant anything. That lack of meaning is in fact a hallmark of the organization. Most of the websites discussing the society clearly plagiarized from each other (many, in fact, openly acknowledge that they have done so), and as you can tell by reading all these similar stories, the group prides itself on being ill-defined. But to give you a flavor of E Clampus Vitus, let me share with you a sampling of the descriptive statements I’ve found:

It’s hard to say anything about the organization with great certainty, largely because its members have traditionally considered ambiguity a virtue and clarity a vice. An oft-repeated saying is that no one is ever in any condition to take minutes at a meeting, and afterward, no one can remember what happened. According to most stories, the society was started by a West Virginia tavern owner named Ephraim Bee in 1845, as a tongue-in-cheek response to what he considered overly serious organizations like the Free and Accepted Masons and the Independent Order of Odd Fellows. Over the next few years, chapters sprang up in several other U.S. cities. An ECV member named Joe Zumwalt moved to California from the midwest in 1849 and established the first major California lodge in 1851. The group attracted entertainment-starved miners, and before long, northern California had chapters all over the place and became the national hub of ECV activity.

ECV members—men only, of course—referred to themselves as “Clampers” for short, and met regularly in a Hall of Comparative Ovations, often the back room of a saloon. Their uniforms were typically red shirts, black hats, and “badges” cut out of tin cans. They put new members, or “Poor Blind Candidates,” through a relatively benign blindfolded hazing ritual, at the end of which each initiate was dubbed Chairman of the Most Important Committee. Each member eventually held a unique and equally silly title that served only to mock the strict hierarchy of other fraternal organizations.

Clamp On, Clamp Off

Apart from drinking and wearing goofy outfits, what did ECV members actually do? For one thing, they spent a good deal of time playing practical jokes on each other and on the general public. They also fabricated their own history, including a story of the group’s creation in 4004 BCE (the date from which their official calendar is reckoned). But E Clampus Vitus was also genuinely charitable. Clampers went out of their way to take care of each other in times of crisis. And death rates among miners being quite high, group members regularly raised money to help widows and orphans, usually making their contributions anonymously.

As the gold disappeared from the California hills after a few decades, so did the miners. By the early 20th century, E Clampus Vitus was essentially extinct. However, in 1931, a group of historians from San Francisco decided to bring the organization back to life. Today, the society has more than 40 active chapters, mostly in California. E Clampus Vitus is known for researching sites of historical interest (though perhaps not of interest to mainstream historians) and erecting plaques to mark them. From what I can tell, the rituals have been toned down quite a bit since the society’s heyday, but the sense of camaraderie and silliness is still going strong.

Note: This is an updated version of an article that originally appeared on Interesting Thing of the Day on August 2, 2006.