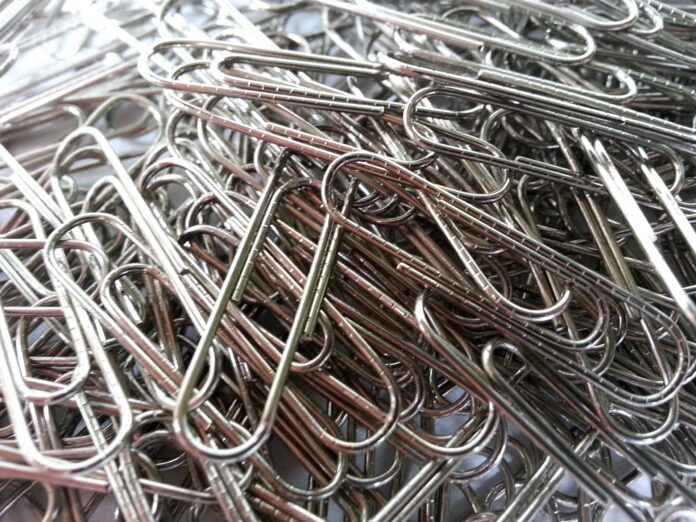 I discovered the importance of paperclips in first grade. One day at lunchtime, my friend Brad gathered a few of us geeky types together on the playground and solemnly handed each of us a small, shiny object. “These,” he said, “are paperclip communicators. You must carry them with you at all times and guard them carefully: these are the only ones of their kind.” He went on to explain that using these special communicators, which merely looked like paperclips, we could talk to each other from a distance. The next morning, a few of us arrived at school early, before Brad got there. We decided to call him on our paperclip communicators. We didn’t hear a reply, but perhaps we just weren’t listening carefully enough. A few minutes later when Brad walked in, we asked if he’d heard us. “Oh yes,” he said, “I heard you on my paperclip communicator when I was riding the bus.” Well, that settled it: there could be no doubt that we were in possession of some powerful technology.

I proudly wore my paperclip communicator on my belt. A few weeks later, though, it disappeared. I looked everywhere, but couldn’t find it. In tears, I told my mother what had happened. She didn’t seem upset; she simply reached into a drawer and handed me another paperclip. “No!” I shouted. “It’s not the same thing! That’s just an ordinary paperclip. Brad couldn’t hear me if I talked into that!” For days I was inconsolable at my loss, and deeply frustrated that my mother couldn’t tell the obvious difference between a paperclip communicator and a bent piece of wire. Brad, of course, couldn’t help me: there were no more paperclip communicators to be had.

About twenty-five years later, I started working for a computer accessories company called Kensington, which is a business unit of ACCO Brands—a major office-products manufacturer. I knew that ACCO made products like paperclips and binders, but what I did not know until I’d worked there for several years was that ACCO was originally short for “American Clip Company.” The humble paperclip was largely responsible for the initial success of what is today a gigantic and extremely profitable business. (There is, I should mention, a school of thought according to which this fastener’s name should be rendered as two words: paper clip. My opinion is that, inasmuch as the purpose of the object is to join things, it’s only right to join the words, too.)

Where did this simple, cheap, and indispensable invention come from? Appropriately, the story is twisted.

As recently as the late 19th century, the most common way to hold papers together was by using a straight pin. This was an inexpensive and functional solution—and, unlike staples, easily removable. It did, however, leave holes in the paper (and occasionally in the finger). But as steel wire became more common, inventors began to notice that it had just the right amount of springiness to be formed into various sorts of effective cliplike devices. In the years just prior to 1900, quite a few paperclip designs emerged—both in the U.S. and in Europe. Some were patented, some not. There was at the time, and still is now, considerable disagreement about who devised which particular type of wire loop when.

The name most frequently associated with the invention of the paperclip is Johan Vaaler, a Norwegian inventor who received patents on several designs—from Germany in 1899 and from the U.S. in 1901. However, Vaaler’s clips were by no means the first, nor are they the same as what we think of today as the paperclip—they did not have an interior loop. The familiar double-U design was devised by Gem Manufacturing Ltd. in England; this clip is therefore sometimes known as the Gem clip. (Incidentally, despite the fact that ACCO made a name for itself with paperclips, the so-called ACCO Fastener is not a paperclip; it’s a two-pronged brass fastener that was invented in 1912.)

Because the Gem clip itself was never patented, we don’t know exactly when it first appeared. Some sources speculate that it may have been as early as 1890; in any case, it was certainly well before Vaaler’s first patent in 1899. In that year, a Connecticut man named William Middlebrook patented a machine for bending Gem-style clips. Such a device would be crucial to the paperclip’s success, as it would enable the clips to be manufactured much more quickly and inexpensively.

Clip Will Keep Us Together

Despite the fact that Norway holds a rather dubious claim as the birthplace of the paperclip, it played an important historical role there. During World War II, when the German army occupied Norway, they forbade citizens to wear any likeness of the king, or even his initials. So instead, people began to wear paperclips on their lapels—symbolizing both national pride and “sticking together.” When the Nazis realized that paperclips were a sign of solidarity against the occupation, they outlawed the practice. Later, a giant paperclip statue was erected in Oslo to honor Vaaler—even though his design was never actually manufactured.

The Gem clip (by whatever name) is, of course, just one of many modern paperclip designs. Some competing clips have little or no tendency to become tangled with each other. But this seeming advantage hasn’t kept the Gem design from becoming synonymous with “paperclip” and holding the top position by far, to this day, in worldwide sales. As for the paperclip communicator…unfortunately, it hasn’t been manufactured since 1973.

Note: This is an updated version of an article that originally appeared on Interesting Thing of the Day on May 1, 2005.