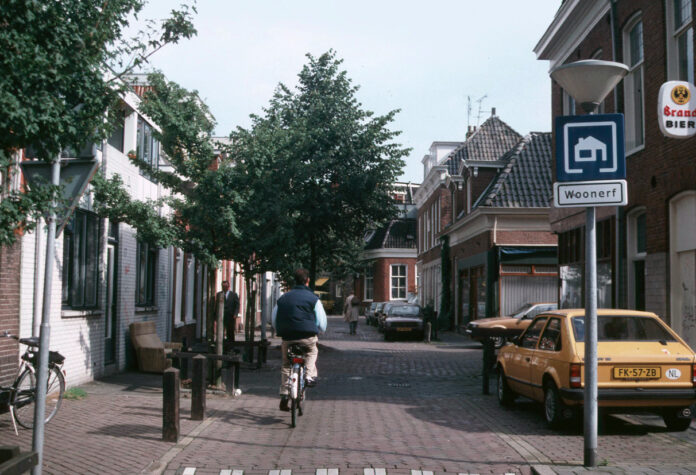 The Dutch word is woonerf, which sounds like it should be a type of foam ball; its plural is woonerven, which sounds a little bit like “unnerving.” Curiously, both of these notions strike amazingly close to the heart of this novel concept for making roads safer for pedestrians (including, naturally, children at play). Often translated into English as “living street,” “living yard,” or “home zone,” a woonerf is a paved street area shared by cars and pedestrians. Counterintuitively, its safety is a byproduct of its ambiguity; despite (or, rather, because of) an almost complete absence of signs, traffic signals, road markings, or even curbs, cars drive more slowly and fewer accidents occur.

When I first read about this concept in Wired years ago, I had a hard time wrapping my brain around the notion that one could make roads safer by making them appear to be less safe. But the idea isn’t new, and it isn’t just some crazy theory. Since at least the 1970s, towns in the Netherlands and elsewhere in Europe have been successfully modifying their roads and sidewalks to conform to this new model of traffic management, and in more recent years, the idea has begun to take hold in more and more North American cities too. Some early Dutch woonerven employed signs, speed bumps, and obstacles (such as benches or large planters) to force cars to slow down, and though that worked, drivers found these measures annoying. Modern versions of the concept follow a “less is more” principle that respects all users of a street and encourages (positive) interaction between motorists and pedestrians.

When a car approaches an intersection with no crosswalks, signs, or other indications of where exactly to go, its driver becomes confused—and slows down in order to figure it out. When a street or intersection is designed in an intentionally ambiguous manner, drivers automatically look for cues in the faces of people standing, cycling, or sitting nearby. This eye contact enables all the road’s users to negotiate their turns and positions in the flow of traffic. It replaces strict rules and separation with psychology—and it works. In many of the cities where living streets have been developed, fatalities and serious injuries from traffic accidents have decreased dramatically.

Traffic engineers who have studied the effectiveness of these “second generation” traffic-calming measures suggest that the clear separation between car areas and pedestrian areas—along with the extensive signs, lights, signals, and lines that are so ubiquitous on the roads—have contributed to a false sense of safety. Whatever traffic laws may say, drivers are easily lulled into an impression that they always have the right of way. And that is one of the reasons so many pedestrians are injured; drivers can simply zone out. (I am speaking, by the way, as a pedestrian who was once hit by a car due to a zoned-out driver.) Without that illusion of safety, drivers are forced to pay more attention.

A living street is certainly not always an appropriate design. A heavily traveled eight-lane thoroughfare in a downtown urban area is not going to yield to this approach, nor will a freeway. And that’s as it should be. Cars are very good at getting from place to place quickly, and no one is suggesting that children should be able to play safely in the middle of an interstate highway because the cars are only going 15 mph (25kph). However, in residential neighborhoods, small towns, and reasonably confined urban and suburban areas, living streets may be a better solution than photo radar, speed traps, and rigidly enforced traffic signs. The challenge is changing our assumptions about how roads are designed—and accepting the uncertainty that follows from a lack of rules. For most of America, that’s a hard sell.

Note: This is an updated version of an article that originally appeared on Interesting Thing of the Day on May 18, 2005.