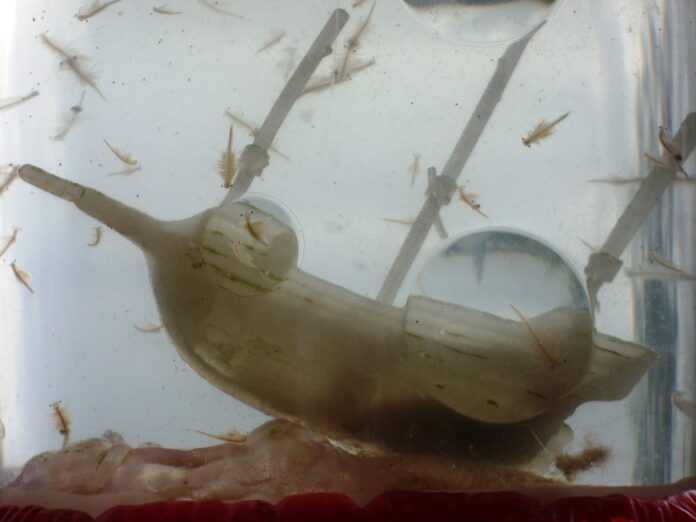 When I go to toy stores with my son, I often marvel at how little things have changed since I was a kid. Alongside all the miracles of modern toy science are dozens of items that I remember seeing on toy store shelves 40 years or more ago, and they look almost exactly the same—except for the price. Slinkies. Magic Rocks. Ant Farms. Silly Putty. Nerf balls. And, of course, Sea Monkeys. I vividly remember the ads in comic books and magazines promising “Instant Life—Just Add Water!” The ads pictured anthropomorphic sea creatures with tails, smiling faces, and crown-like protuberances on their heads. These intelligent and fun-loving creatures could be your new pets for just a few dollars.

I never managed to prevail upon my parents to spring for the Sea Monkeys, but I always wondered just how close the real thing would be to the hype. A number of years ago, when Morgen bought a Sea Monkeys set as a present for a friend, I got to see them in action. The little critters were, unsurprisingly, not terribly impressive as pets. However, in terms of both biology and marketing they are a marvel every bit as interesting as those ads implied.

Sea Monkeys are a variety of brine shrimp. Unlike the common species Artemia salina, Sea Monkeys were engineered as a larger and longer-lived hybrid variety the manufacturer calls Artemia nyos (NYOS stands for New York Ocean Science Laboratories, where the breed was developed). Like all brine shrimp, Sea Monkeys lay eggs encapsulated in a cyst shell. These cysts have the unusual capability of remaining viable over long periods of time when completely dehydrated—effectively maintaining a state of suspended animation. This state, known as cryptobiosis, is also seen in some plant seeds, insect larvae, and crustacean eggs. When the eggs are rehydrated in a saline solution, they continue with their development and hatch soon thereafter.

Sea Monkeys have other interesting characteristics, such as the fact that they have one eye when they hatch but later grow two more. According to the official Sea Monkeys literature, the animals also breathe through their feet—I’ll have to take their word for it—and the females can reproduce either sexually or asexually.

But when you get right down to it, these creatures, which rarely grow longer than half an inch (about 15mm), are not that interesting as pets go. Brine shrimp are often sold as food for other fish, and their low status on the food chain says something about not only their size but their neural capacity. Compared to even the most ordinary tropical fish, the translucent Sea Monkeys are rather tedious to watch—if you can spot them at all—as they swim around in their little tanks.

That brine shrimp could ever be conceived of as pets is nothing less than a stroke of marketing genius. The man behind it was inventor Harold von Braunhut, who was also responsible for such kitschy fads as the X-Ray Spex, which got me in trouble when I tried to wear them during class in sixth grade. Von Braunhut began working with brine shrimp in 1957, and in 1960, his first simple kits went on sale. The fact that the eggs could be shipped easily, stored indefinitely, and brought back to life within a couple of days suggested the name “Instant Life,” which was how the product was first sold. When von Braunhut realized the creatures themselves needed a more marketing-friendly name, he began calling them Sea Monkeys, reportedly because of their tails. (Any actual resemblance to monkeys is purely in the mind of the beholder.)

Von Braunhut died in 2003. But in recent years, his invention—along with its innumerable variations and spin-offs—has sprung back to life as a retro fad. For about US$10 (rather than the original $0.49), you can get a plastic tank, water purifier, egg “crystals,” food, and accessories—including a handbook whose main purpose is to convince you to buy still more supplies to keep your new pets alive as long as possible. Sea Monkeys come with a two-year “growth guarantee,” but owners seldom maintain their interest in keeping the creatures alive for more than a few months. As pets, they make great fish food.

Note: This is an updated version of an article that originally appeared on Interesting Thing of the Day on December 4, 2004.