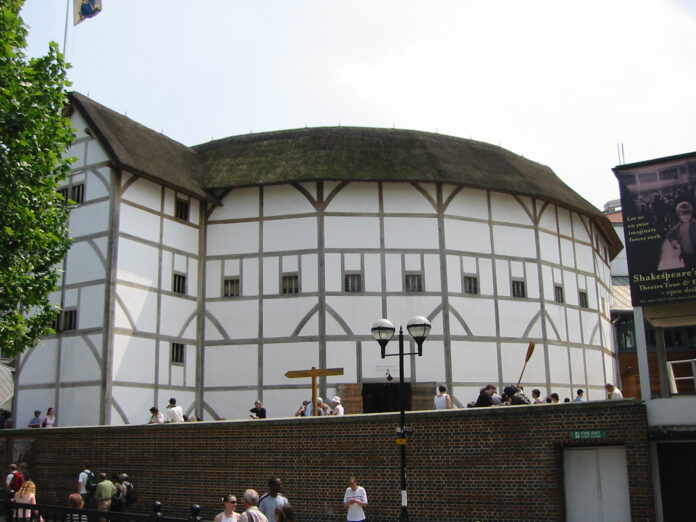 Most modern theaters—whether designed for movies, plays, or musical performances—consist of a dark, roughly rectangular room, with seats in neat rows and an elevated stage in front with a curtain, lighting, sound system, and other accoutrements. I’ve seen a number of Shakespeare’s plays in such theaters, but what I experienced when I did was quite a bit different from what London audiences at the beginning of the 17th century saw when they went to see Shakespeare’s just-written plays at their first venue: the Globe Theatre. Although it was absent for centuries, the theater is now back, and it gives theatergoers an experience closer to that of Shakespeare’s time.

The original Globe Theatre was built in 1599 on the south bank of the Thames in London’s Southwark district. The 1599 Globe was not an entirely new building, however. Shakespeare’s troupe had been performing in another theater across the river (called simply The Theatre), but because of the high cost of leasing the land on which The Theatre was located, it was dismantled; the pieces were moved across the river and reassembled, then dubbed The Globe Theatre. Not only was the Globe the primary venue for many of Shakespeare’s plays, he specifically wrote many of them for that theater. The original Globe burned to the ground in 1613, after a cannon went off during a production of Henry VIII and a spark ignited the thatched roof. The Globe was rebuilt within a year, however, and continued to operate until 1642, when it was closed (along with the rest of London’s theaters) by the Puritans who found it morally objectionable. In 1644, 28 years after Shakespeare’s death, the Globe was demolished.

Only a few rough sketches of the Globe survived over the centuries, but based on archeological evidence, texts, and other sources, it has been possible to make some fairly reliable educated guesses about the details of its construction. The original Globe apparently had 20 sides, making it appear almost circular. The central part of the theater was open to the sky; seating was provided in a three-story, covered gallery around the outside. But many theatergoers stood in the central court in front of the stage to watch performances. The audience was expected to interact with the actors in Shakespeare’s time, though in many cases they simply wandered in and out, eating, drinking, and talking, with the play going on in the background.

Return of the Globe

In 1996, after almost three decades of planning, a new replica of the Globe—built by hand using authentic materials and construction techniques—reopened in London not far from the site of the original. The designers’ goal was to make the new Globe as similar as possible to the first one, making concessions only as necessary to comply with fire regulations. The replica of the Globe Theatre in London is just one of many around the world, but it is undoubtedly the most historically accurate. As in the early 1600s, actors perform without amplification, spotlights, backdrops, or other scenery, and with only a minimum of props. The theater’s annual season normally runs from May to October.

On my first trip to London in 2002, I was keen to visit the Globe, but due to what you might call a comedy of errors, I was only able to see it from the outside on that trip. The next time I was in London, seven years later, I planned ahead better, and Morgen and I saw a delightful performance of As You Like It at the Globe, and it was fantastic to immerse myself in that (to modern tastes) unusual atmosphere. Now I’m living in San Diego, home of The Old Globe—a lovely theater that resembles the original Globe from the outside, though not from the inside. (The original Old Globe was intended as a close replica, but it was destroyed by fire and rebuilt as a more modern, fully covered theater.) Another replica is in Odessa, Texas: The Globe of the Great Southwest. Yet another opened in Rome in 2003.

The new Globe represents not just the reconstruction of a historically significant piece of architecture, but a way to relive the entire experience of live drama in the 1600s. All the world may be a stage, but if you want to see Shakespeare as the author intended, this particular stage is the best.

Note: This is an updated version of an article that originally appeared on Interesting Thing of the Day on September 7, 2003, and again in a slightly revised form on September 19, 2004.