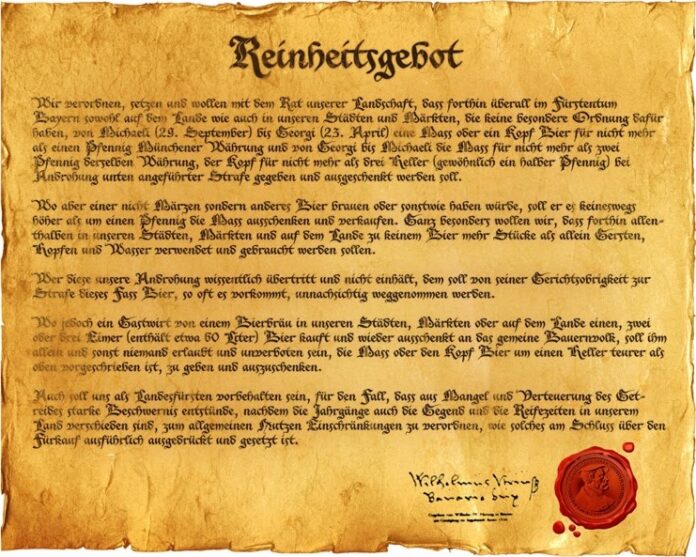 Although Germany ranks only third in per-capita beer consumption (behind the Czech Republic and Ireland), it is clearly a place where people take their beer seriously. The region of Bavaria, in particular, is home to the oldest (non-religious) legal standard of food production still in force: The legendary Bavarian Purity Law of 1516, known in German as the Reinheitsgebot.

The Duke of Beers

The short version of this law, which was enacted on April 23, 1516 by Bavarian Duke Wilhelm IV (a.k.a. William IV), is that beer may contain only three ingredients: barley, hops, and water. Ostensibly, this makes the law one of the oldest “consumer protection” regulations, instilling confidence in purchasers that the beer they get will contain no questionable grains or additives. (Among the additives the law sought to ban were some commonly used herbs that had hallucinogenic effects.) But in fact, the bit about beer ingredients was simply one sentence in a much longer ordinance that primarily specified beer pricing regulations. The intention of the law was not only to ensure the quality of the beer and control pricing, but also to guarantee that more valuable grains such as wheat and rye, which were needed for bread and often in short supply, were not used for beermaking. This was not the first law of its kind, either—similar ordinances date back as far as 1165—but it was the first to apply to all of Bavaria, and the oldest such regulation still in force today.

Astute observers will note that yeast is not among the three ingredients listed—and without yeast, beer could not ferment. In the 16th century, the existence of microorganisms was still unknown, and beer was sometimes made simply by allowing the ingredients to sit out until some airborne yeast found its way into the vat and fermentation began on its own. Other times, sediment from an earlier batch was used as a starter—but this was not thought of as a separate “ingredient.”

The Yeast You Can Do

During the 20th century, the Reinheitsgebot underwent some significant changes. For one thing, yeast was officially added to the list of allowable ingredients. For another, a distinction was made between beers brewed with “top-fermenting” yeasts and those brewed with “bottom-fermenting” yeasts. For bottom-fermenting beers, only malted (that is, sprouted) barley is permitted; for top-fermenting beers, any malted grain (such as wheat) can be used, as can sugar. There are also a number of exceptions and variations in the law that can be applied under certain circumstances. In some cases you can manufacture a “special” beer that colors outside the lines slightly as long as you clearly identify it as such, and of course you can put anything you want in your beer as long as you don’t actually call it “beer.”

Critics have pointed out that one can follow the Bavarian Purity Law and still produce very bad beer (for example, using poor-quality ingredients or sloppy technique)—and that, conversely, many excellent beers (including some well-known Irish and Belgian varieties) do not and could not conform to this law. (European Union rules, by the way, now stipulate that the Reinheitsgebot can only apply to beers brewed inside Germany, not to imports.) So in a way, what the regulations enforce is “purity” in the sense of values traditional to the region, rather than the absence of contaminants or a guarantee of quality.

German beers that conform to the Bavarian Purity Law get to advertise this fact on their labels, and it’s popularly believed to have a great deal of marketing appeal. So much so, in fact, that the principles have been adopted by beermakers in many other countries as well, right down to local microbreweries in the U.S. and Canada. I must admit that, despite having my own high standards for beer, at this point I think the Bavarian Purity Law is anachronistic and more than a bit gimmicky. But then, I’m also that guy who actually likes Zima, so take my opinion with a grain of barley.

Note: This is an updated version of an article that originally appeared on Interesting Thing of the Day on April 14, 2005.