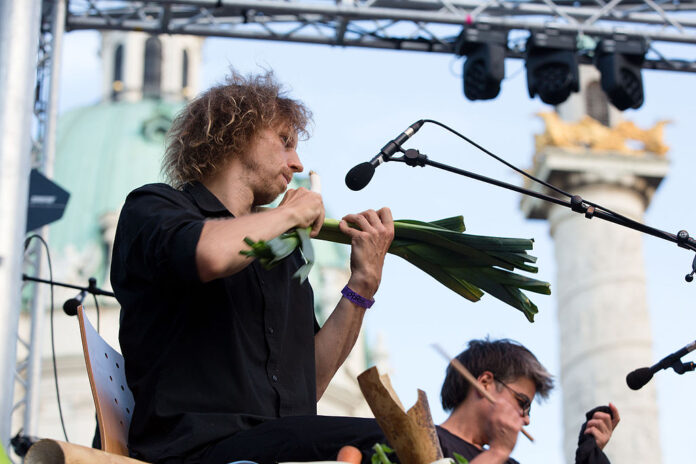 The 20th-century American composer John Cage was well known for his experimental approach to making music. His most famous composition, titled 4'33" (four minutes and 33 seconds), playfully widens the boundaries of what is considered music. The piece consists of four minutes and thirty-three seconds of structured silence (although it was written to be performed for any length of time), during which time listeners are drawn to discover the ambient sounds going on all around them.

The orchestra, consisting of 11 musicians, a sound engineer, and a video artist, was first formed in 1998. Since then, the group has released three albums, released several videos, and given concerts all over the world. Their work is influenced by many different styles of music, including classical, jazz, and electronic/techno music. For example, their second album, Automate, contains their versions of songs by the influential German electronic music group Kraftwerk. (Their third and latest album is called Onionoise.) In a creative melding of the organic and the digital, the group recorded samples of their vegetable instrument sounds, and then assembled them to create digital compositions.

And what do vegetables sound like? Like any orchestra, the instruments of the Vegetable Orchestra produce different categories of sound based on their shape and the method of playing them. There are percussion instruments: celeriac bongos, a clapper made from an eggplant, pumpkins to be pounded upon, and dry beans that are shaken to provide rhythmic effects. There are strings (a leek violin), woodwinds (a carrot recorder), and versions of brass instruments (a trumpet made from a red pepper). Of course, the orchestra is also continually coming up with new instrumental creations, determined by their need for a specific sound or a new discovery at the market.

From the Raw To the Cooked

Unlike other orchestras, the members of the Vegetable Orchestra must remake their instruments every time they perform. In preparing for a show, the group begins at a local market, where finding the perfect specimens is crucial. Once they have procured the produce they need, they set to work crafting their instruments, improvising as needed. Because the group’s members are drawn from a variety of artistic backgrounds, including the visual arts and architecture, the making of instruments is also part of their creative work. Some instruments take very little time to prepare; others, such as the carrot recorder, can take as long as half an hour to make.

Later, during the performance, the interaction between the musicians and the vegetables continues. As some instruments tend to dry out as time goes on, they must be moistened, and some instruments may disintegrate completely. This aspect of chance adds to the improvisational quality of the orchestra’s performances, although most of their pieces are composed, not improvised. In their concerts, the orchestra aims to engage the audience’s senses fully—from the sounds they create, to the video images projected behind them on the stage, to the smell of the vegetables in the air. And finally, as an encore, the audience is invited to taste the instruments, in the form of vegetable soup available to all.

This full cycle from fresh produce to soup also addresses another theme important to the orchestra, that of decay. In this sense, it reminds me of the work of Andy Goldsworthy, who creates art out of objects found in nature. Once he has created a work, Goldsworthy photographs it, but then lets it degrade as it will. Working with an ephemeral medium, be it vegetables or icicles, is itself an artistic statement, in that it favors the process of creation over the finished product. What is left is the memory of a moment in time that can be savored like a warm bowl of vegetable soup.

Note: This is an updated version of an article that originally appeared on Interesting Thing of the Day on July 27, 2007.