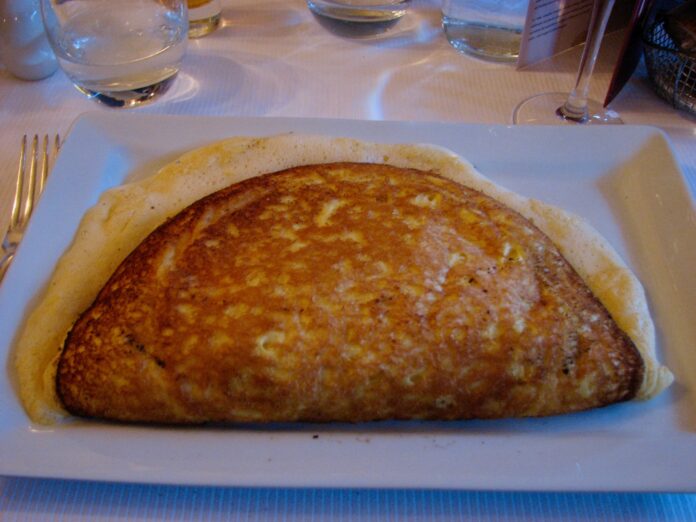 As egg dishes go, omelets are on the fancier end of the scale, which isn’t saying much. Whip some eggs; add a dash of milk, some seasoning, and some optional fillings; cook until brown on the bottom and then flip it over in half—that’s pretty much it. Usually. But there’s a place in France that has made an entire art form out of omelets (or omelettes, to use the local spelling), and it’s partially performance art.

The island of Mont Saint-Michel sits just off the north coast of France’s Normandy region. In fact, it’s connected to the mainland by a causeway, which is usually passable by car. It’s an incredibly scenic and historic little village, built on the bottom and sides of a large hill with a gothic church on top. It’s also a tourist trap, though few visitors seem to mind. Many of the local businesses (shops, restaurants, museums, and other attractions) are owned by the Poulard family, which is best known for its flagship restaurant La Mère Poulard (named for Madame Anne Poulard, née Boutiaut, who founded it in the late 1800s).

Although La Mère Poulard offers a full menu of lunch and dinner dishes, the star attraction is, as it has been for over a century, the omelet. (I did say lunch and dinner, by the way: in France, omelets aren’t usually considered a breakfast food.) As you walk in, you’ll see one or more chefs standing in front of a huge, wood-burning stove, furiously whisking eggs in large copper bowls. They spend, let’s just say, many minutes whipping each batch, and I can’t even imagine the rate of repetitive stress injuries. In any case, the omelets, which are then cooked over the aforementioned wood fire in copper skillets—are absurdly thick and fluffy—they’re basically egg foam with a crispy bottom. And they’re pricey, too: you will certainly spend upwards of US$50 on a single omelet (though, remember, you’re paying more for the labor than for the ingredients).

When we visited the restaurant in 2010, Morgen was eight months pregnant with our first son, and that resulted in un petit problème. You see, the French prefer their eggs (like their meat) undercooked—that foam was runny. The staff realizes, of course, that there are health risks with undercooked eggs, and that those risks are worse for pregnant women. So our waiter politely but firmly declined to serve my wife an omelet. Needless to say, actually cooking it longer was completely out of the question, because that’s not how we make them. I ordered one, though, and it was delicious, though I must say I objected to their custom of serving what would ordinarily be the fillings in a separate dish. (Geez, I paid $50 for this thing and it’s just a kit?) But again: we couldn’t possibly compromise the integrity of our art.

Travel sites will tell you that La Mère Poulard’s omelets are gross and overpriced, and from a certain point of view, those things are both true. But you have to admire the stubborn effort that goes into their vision of the perfect omelet. If you’re ever in Normandy, I’d say it’s worth having the experience.

Our friend, author and food blogger David Lebovitz, wrote about these omelets at great length (with lots of pictures) on his blog (see La Mere Poulard Omelet, Mont Saint-Michel).